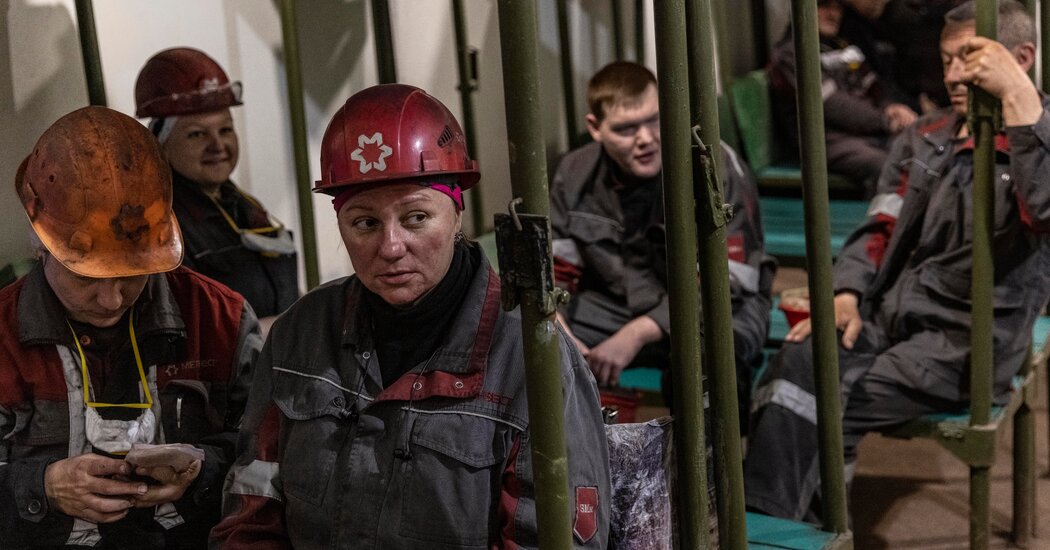 SLOVIANSK, Ukraine — Russia’s push to give its president a showcase victory in Ukraine appeared to face a new setback on Saturday, as Ukrainian defenders pushed the invaders back toward the northeast border and away from the city of Kharkiv, with the Russians blowing up bridges behind them.

With less than 48 hours before President Vladimir V. Putin of Russia aimed to lead his country in Victory Day celebrations commemorating the Soviet triumph over Nazi Germany, the apparent Russian pullback from the area around Kharkiv, Ukraine’s second-largest city, contradicted the Russian narrative and illustrated the complicated picture along the 300-mile front in eastern Ukraine.

The Russians have been trying to advance in eastern Ukraine for the past few weeks and have been pushing especially hard as Victory Day approaches, but Ukrainian forces — armed with new weapons supplied by the United States and other Western nations — have been pushing back in a counteroffensive.

The destruction of three bridges by Russian forces, about 12 miles northeast of Kharkiv, reported by the Ukrainian military, suggested that the Russians not only were trying to prevent the Ukrainians from pursuing them, but had no immediate plans to return.

A senior Ukrainian official, speaking on condition of anonymity to discuss the fighting, said Russian forces were destroying bridges not to retreat but because “we are pushing them out.”

He said the fight for Kharkiv was not over, and that although “at the moment we are dominating,” Russian forces were trying to regroup and go on the offensive.

Some military analysts said the Russian actions were similar to what Russia’s military had done last month in a retreat from the city of Chernihiv north of Kyiv.

Frederick W. Kagan, a military historian and a senior fellow at the American Enterprise Institute, a Washington-based public policy research group, said Russia’s strategy near Kharkiv could be an indicator that “the order to retreat to somewhere had been given and they were trying to set up a defensive line.”

Ukrainian forces have retaken a constellation of towns and villages in the outskirts of Kharkiv this past week, putting them in position to unseat Russian forces from the region and reclaim total control of the city “in a matter of days,” according to recent analysis by the Institute for the Study of War, a Washington-based research group.

The setback is now forcing the Russian military to choose whether to send reinforcements intended for elsewhere in eastern Ukraine to help defend the positions on the outskirts of Kharkiv, the institute said.

The back-and-forth around Kharkiv is part of a more complex battlefield in eastern Ukraine that has left an increasing number of towns and cities trapped in a “gray zone,” stuck between Russian and Ukrainian forces, where they are subject to frequent, sometimes indiscriminate, shelling.

“The Russian occupiers continue to destroy the civilian infrastructure of the Kharkiv region,” the region’s governor, Oleh Sinegubov, said in a Telegram post on Saturday, adding that shelling and artillery attacks overnight had targeted several districts, destroying a national museum in the village of Skovorodynivka.

For Russia, perhaps the best example of anything resembling a victory was the long-besieged southeastern port city of Mariupol. Although much of the city has been destroyed by Russian bombardments, there were growing indications on Saturday that Russia’s control of the city was nearly complete.

The Ukrainian Ministry of Defense’s intelligence directorate said in a Saturday statement that Russian officers were being moved from combat positions and sent to protect a Russian military parade being planned in Mariupol.

Petro Andrushchenko, an adviser to the city council, posted a series of photos to Telegram on Friday that appeared to show how Russian forces were restoring “monuments of the Soviet period” across the city.

One image appeared to show a Russian flag flying above an intensive care hospital. Another image, posted on Thursday, showed municipal workers replacing Ukrainian road signs with signs in Russian script. The images could not be verified.

On Friday, 50 people were evacuated from the city’s Azovstal steel plant, the final holdout of Ukrainian forces and a group of civilians in the city. Three Ukrainian soldiers were killed on Friday during an attempt to evacuate civilians from Mariupol’s Azovstal steel factory, said Mikhailo Vershinin, the chief of the city’s patrol police.

Mr. Vershinin, who was at the factory, said via a messaging app on Saturday that a rocket and a grenade were to blame. “Six were wounded, some seriously,” he said, and in the factory’s makeshift hospital, “there is no medicine, no anesthesia, no antibiotics and they may die.”

Both Ukrainian and Russian officials said Saturday that all civilian evacuations from the Mariupol factory had been completed.

There was no immediate confirmation from the Red Cross or United Nations, which have been helping to coordinate recent evacuations from the factory. A spokeswoman for the Red Cross said earlier on Saturday that efforts to evacuate the remaining civilians were “ongoing.”

Elsewhere, Russia launched six missile strikes on Saturday aimed at Odesa, Ukraine’s Black Sea port, according to the city council. Four hit a furniture company and destroyed two high-rise buildings in the blast, and two missiles were fired on the city’s airport, which already had been rendered inoperable by a Russian missile that knocked out its runway last week.

The goal of Russian forces — for now at least — appears to be seizing as much of the eastern Ukrainian region known as the Donbas as possible, by expelling Ukrainian forces that have been fighting Russian-backed separatists for years in the provinces of Donetsk and Luhansk. Since Russia’s invasion began on Feb. 24, about 80 percent of those two provinces have fallen under the Kremlin’s control.

The regional governor of Luhansk in eastern Ukraine, Serhiy Haidai, said on Facebook on Saturday that a Russian bomb hit a school in the village of Bilogorivka where about 90 people had taken shelter. About 30 people have been rescued so far, he said. The bodies of at least two people were recovered from the rubble, according to Ukraine’s State Emergency Service. Rescue operations were suspended on Saturday night and were to resume on Sunday, officials said.

Russian forces are trying to break through Ukrainian lines and encircle troops defending the area around the eastern city of Sievierodonetsk but are for now being held in check, the regional governor, Serhiy Haidai, said Saturday.

“It is a war so anything can happen, but for now the situation is difficult but under control,” Mr. Haidai said in a telephone interview. “They have broken through in some places and these areas are being reinforced.”

The Russians seemed “unlikely to successfully surround the town,” according to the latest update from the Institute for the Study of War.

The apparent aim of Russia’s military is to seize Sievierodonetsk or cut it off from the bulk of Ukrainian forces fighting in the east, and continue a push south to the major industrial city of Kramatorsk.

Mr. Haidai said Russia’s military had deployed units with better training and more combat experience than the Russian soldiers who were initially thrown into the invasion.

“In the beginning, they sent in newly-mobilized soldiers from occupied territory,” he said. “But they can’t fight. They aren’t dressed in flack jackets. And so they just died by the dozen or the hundred. But they’re running out of these.”

Mr. Haidai said he had urged anyone who could to evacuate, but that about 15,000 people remained in Sievierodonetsk. Some, he said, are older and “want to die in the place where they were born.”

By contrast in the capital, Kyiv, and much of the country’s west, the atmosphere seemed worlds away from the constant bombardment of the war — despite the occasional and unpredictable Russian missile strikes. Cars have returned to Kyiv’s streets and people living there have resumed some semblance of their normal routines.

“Please, this is your life, the life of your children,” he implored Ukrainians in an overnight address.

Residents of towns and villages in the country’s east have often been shaken awake with bomb attacks, typically between 4 a.m. and 5 a.m.

On Saturday morning, the small village of Malotaranivka became a target. A bomb struck at about 4:15 a.m., blasting apart homes and a small bakery, leaving a crater at least 15 feet deep and a wide radius of destruction. While no one was killed, residents expressed fury at the Russians.

“What kind of military target is this?” said Tatyana Ostakhova, 38, speaking through the gaping hole in her goddaughter’s apartment where she was helping to clean up. “A store that bakes bread so people don’t die of hunger?”

Such strikes have occurred with more frequency in the prelude to Victory Day in Russia, which Mr. Putin was expected to use as a platform for some kind of announcement about what he has called the “special military operation” in Ukraine.

“It’s like we’re in a dream,” said Svetlana Golochenko, 43, who was cleaning up the remnants of her son’s house. “It’s hard to imagine that this is happening to us.”

Malotaranivka is a small village of single-family homes and wood-framed apartment buildings about eight miles from Kramatorsk. Residents said that aside from a few checkpoints there was no military presence in the area, making the bombings by Russians even more incomprehensible.

“Who knows what they have in their empty heads,” said Artur Serdyuk, 38, who was covered in dust and smoking a cigarette after spending the morning cleaning up what was left of his home.

Mr. Serdyuk said he had just returned to bed after going out for a middle-of-the-night cigarette when the explosion hit. The blast blew the roof off his home and incinerated his outhouse, leaving nothing but a roll of toilet paper sitting in a pile of dust near the hole for the latrine.

His neighbor’s home was opened like a dollhouse, allowing a reporter to peer into the remains of the kitchen decorated with wallpaper featuring green peacocks.