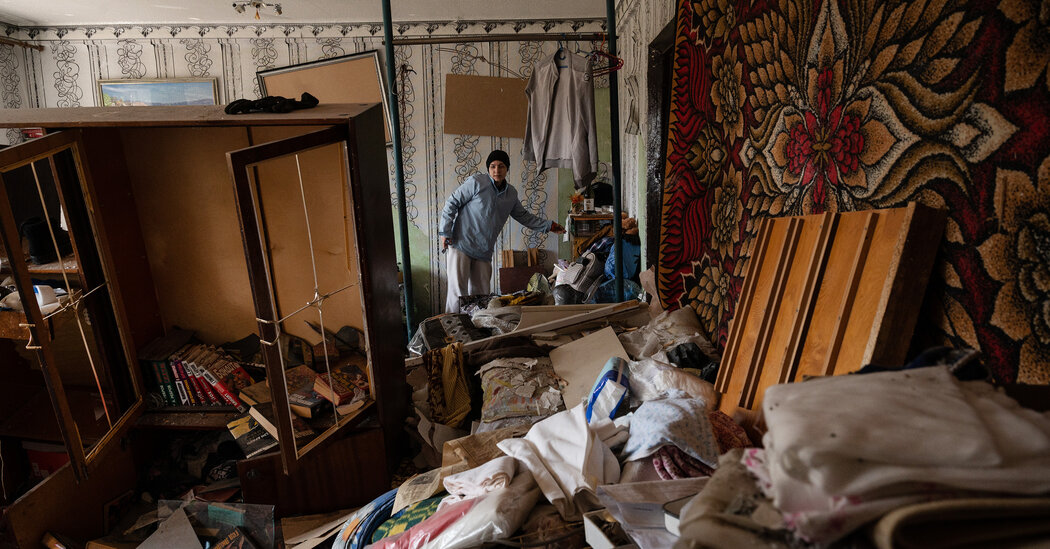 DONETSK REGION, Ukraine — Fighting raged on Thursday across eastern Ukraine, from the Kharkiv area in the north where Ukrainian forces regained ground, to Mariupol in the south, where Russians breached the last Ukrainian redoubt in a steel plant, as Moscow’s forces battled to present President Vladimir V. Putin with something he can call victory.

Some of the most ferocious combat took place between those two poles, in or near the north of the Donetsk region, where the earth heaved with constant artillery bombardment. Russian forces approached from the east, north and south, vainly trying to trap and destroy Ukrainian units in and around the cities of Kramatorsk and Sloviansk, and the towns of Lyman and Barvinkove.

At a busy medical field hospital in that cauldron, where the smoke of battle dulled the spring sunlight, a Ukrainian soldier with a concussion lay curled into a fetal position, while another, his face half torn away, lay dead in a black body bag. In Kramatorsk, now largely abandoned, three Russian airstrikes gutted a large apartment complex and a store selling bras and underwear, injuring 26 people.

The Kremlin is determined to reach some kind of milestone, Western officials and analysts say, by May 9, the day Russia commemorates the Soviet Union’s triumph over Nazi Germany with a military parade full of bombast and martial spirit that Mr. Putin has turned into something close to a religious holiday. After more than two months of his vaunted military’s halting performance and heavy losses in Ukraine, they say, Russia’s autocratic leader needs something to show for the war’s massive cost in lives and treasure.

But it is difficult to evaluate how the actual fighting is going. The Russian advance appears to have been sluggish, with forces taking a few villages each day in one location, while losing just as many in another. Ukrainian forces are mounting a highly mobile defense, maneuvering in small units around the larger masses of Russian forces, ensuring that lines remain fluid and unpredictable.

“The front is swinging this way and that,” said a tattooed 24-year-old army paramedic named Zhenya who was resting at the field hospital. “At first they weren’t hitting nearby here, now shells are coming in over the fence.”

In Mariupol, perhaps the city most devastated by the Russian invasion that began on Feb. 24, furious close-quarters combat shook the sprawling Azovstal steel plant, as Russian forces finally began to penetrate the complex where the last Ukrainians have held out for two months in a warren of underground bunkers. The number of Ukrainian fighters remaining is unclear, but Ukrainian officials said that even after a recent trickle of evacuations, about 200 civilians are still trapped there.

“Heavy, bloody battles are raging,” Lt. Col. Denys Prokopenko, a Ukrainian commander at Azovstal, said in a video posted Wednesday night. On Thursday, Petro Andriushchenko, an adviser to the city government, said that with nonstop shelling and fighting, the plant had been “turned into hell.”

In its latest assessment, the Institute for the Study of War, a research organization in Washington, said that Moscow wanted “to claim complete control of Mariupol by May 9, with Russian propagandists recently arriving in the city to set conditions for further claims of a Russian victory.”

With Russian efforts now concentrated farther south, Ukrainian forces have been pushing the Russians back in the Kharkiv area, recapturing towns and villages, and in some cases forcing Russian units beyond artillery range of the battered city.

The Kremlin had a muted response on Thursday to The New York Times’s report that the United States had supplied intelligence to Ukrainian forces that had helped them locate and kill Russian generals. Russia was already “well aware” that NATO and its member countries were sharing intelligence with Ukraine, said Dmitri S. Peskov, Mr. Putin’s spokesman, who added that Western aid only lengthens the war and “cannot prevent the fulfillment” of Russia’s goals.

The Pentagon spokesman, John F. Kirby, declined to comment directly, but said the United States did not specifically provide intelligence on the locations of Russian officers, “or participate in the targeting decisions of the Ukrainian military.”

After Russia’s initial drive in the north failed to take Kyiv, Ukraine’s capital, its forces withdrew and began to focus on capturing territory in the eastern Donetsk and Luhansk regions, but their progress has been slow and costly.

In a striking moment of candor, Mr. Putin’s closest foreign ally, Aleksandr G. Lukashenko, the ruler of neighboring Belarus, called the fighting a war — a term forbidden in Russia — and acknowledged that it was not going well for Russia. “I feel like this operation has dragged on,” he said in an interview with The Associated Press.

In the north of Donetsk, the dead and wounded flowed into the field hospital at a regular clip as Russian artillery pounded the rolling, wooded hills where Ukrainian troops were mounting their defense.

On a visit on Thursday, ordnance whizzed, thumped and boomed in all directions. Military paramedics brought wounded soldiers to the field hospital to stabilize them before sending them by ambulance to a military hospital farther from the front.

Ukrainian military officials asked that the precise location of the field hospital, about a 25-minute drive from Kramatorsk, be withheld to prevent the Russians from targeting it. Even so, Russian artillery shells landed nearby.

The toll on Ukrainian forces could be measured by the columns of ambulances racing away from the front lines, even as trucks and armored vehicles carrying troops and equipment headed in the opposite direction.

“We’re not making any kind of prognoses,” said Valeria Skorik, a press officer for the 81st brigade, among the units fighting in the northern part of the Donetsk region. “I’ve been asked by journalists about what kind of event we might have on May 9, but I’ve just decided not to answer.”

Western officials and analysts say that Mr. Putin could be planning to make a dramatic announcement on Victory Day, when he traditionally reviews the parade from an elevated platform in Red Square and delivers a speech surrounded by aged World War II veterans. He often has other heads of government with him, too, but the war has left Russia largely isolated, and the Kremlin says no foreign leaders were invited this year.

Speculation has centered on a possible claim of victory by Mr. Putin or, more ominously, an acknowledgment that Russia is at war and the announcement of a mass mobilization with expanded conscription, a move that would be unpopular.

Ukrainian forces in and around northern Donetsk appear to be holding the line for now, offering poor prospects for a Russian achievement there, despite Russia’s incessant hammering at Ukrainian military positions and towns.

The airstrike on Kramatorsk left a large crater and generated a shock wave so powerful that it blew out the interior walls of a row of apartments about 75 feet away and ripped steel doors off hinges. Touring the damage, Pavel Kirilenko, chief of the Donetsk region’s military administration, said that remarkably, no one had been killed.

“This is yet more confirmation that everyone needs to leave the city,” Mr. Kirilenko said. “The enemy is exclusively targeting elements of civilian infrastructure in order to spread panic — and not only spread panic, but to destroy the civilian population.”

In anticipation of a potential assault, officials have urged anyone who is able to leave the city as soon as possible. Many have done so: The streets of Kramatorsk, an industrial and administrative center with a prewar population of about 150,000, are largely empty. Most businesses are shuttered. Each day, buses leave the city center, evacuating residents to points west.

But not everyone has heeded the calls to leave. Inside the destroyed apartment building on Thursday was a woman in a bathrobe, cradling a small dog. She gave only her first name, Viktoria.

The explosion, at about 4:30 a.m., blew her balcony and the entire front wall of her apartment onto her and her husband as they slept. Her husband suffered a large head wound; drops of blood stained the mattress and floor. Her 24-year-old daughter was left with a broad cluster of bloody cuts from flying glass.

She said local officials had urged her to shelter in a school, at least for the night. But she said she just wanted to seal the front of her apartment in plastic to keep out the elements, and stay there for the night.

“There is shelling everywhere,” she said. “So where are we supposed to go?”

For the last defenders of Mariupol, long cut off from outside aid with their numbers and supplies dwindling, the situation was even more dire.

Russian forces managed to find their way into the four-square-mile Azovstal complex where they have been sheltering with the help of a former worker familiar with its layout, according to Anton Gerashchenko, an adviser to the Ministry of Internal Affairs. Mr. Gerashchenko, on social media and speaking to reporters, said that an electrician who had worked at the steel plant showed the Russians tunnels to enter the complex.

He said the Russian desire to declare victory on May 9 explained why Russian state television hosts, who are some of Mr. Putin’s leading cheerleaders — including Vladimir Solovyov, under U.S. and European sanctions for promoting Kremlin disinformation — have traveled to Mariupol.

Communications from Azovstal briefly went dark on Wednesday, but on Thursday morning, fighters in the bunkers were again sending messages via social media platforms, promising not to surrender.

“It has been three days since Russian troops broke into the territory of Azovstal,” said Capt. Svyatoslav Palamar, the deputy commander of the Azov regiment at the plant. “Heavy fighting continues to take a bloody toll.”

Reporting was contributed by Richard Pérez-Peña from New York, Cora Engelbrecht and Marc Santora from Krakow, Poland, and Anton Troianovski from Istanbul.