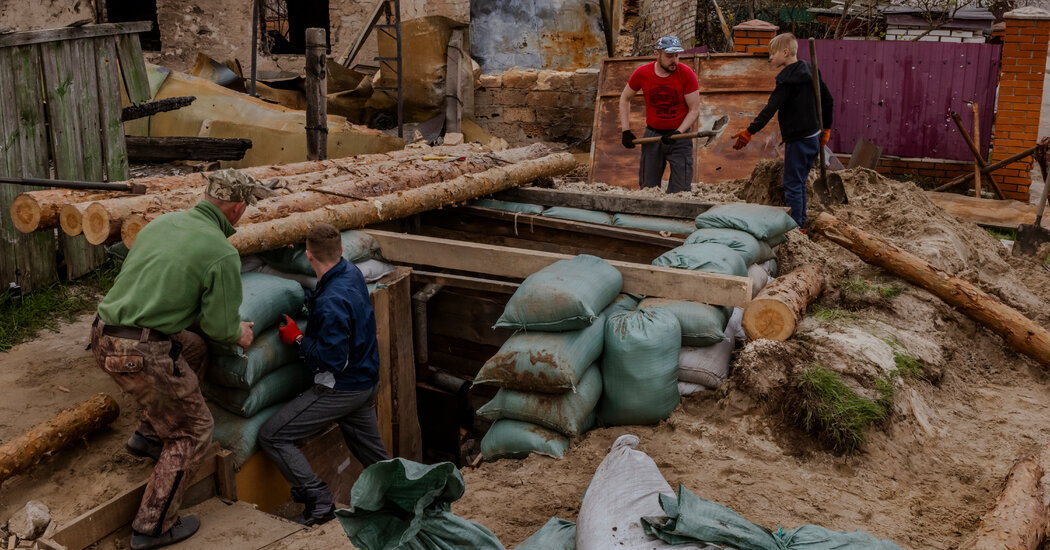 The footage shows a child wearing a makeshift diaper crafted out of tape and plastic bags, asleep in a dank and moldy room. An elderly woman with a bandaged head is seen dressed in a uniform jacket, once worn by steel plant workers, as she shakes uncontrollably. And small children make plaintive requests. “We want to go home,” a girl says. “We want to see the sunshine.”

These scenes are from videos shared online in recent days by the Azov regiment, a unit in the Ukrainian military, which says they were taken in the mazelike bunkers beneath the sprawling Azovstal steel plant in Mariupol, Ukraine. Russian soldiers control the rest of the city, and fighting continues around the plant. The plant has become the last refuge for thousands of trapped Ukrainian fighters and civilians. There is no escape, and little chance of rescue.

The independent journalists who chronicled the siege of Mariupol for Western news media left a month and a half ago because the security risks were too great. The warring parties have stepped in to fill the vacuum of firsthand coverage, sharing content from the ground and, in Azov’s case, pleading for help to their hundreds of thousands of followers on social media.

With almost no cellphone service, electricity or access to the internet, Azov’s videos provide what could be some of the only glimpses into life at the steel plant.

Early Thursday, Azov fighters said Russian forces had bombed a field hospital within the plant, reportedly killing wounded soldiers and burying people in the rubble. Reports of the attack prompted renewed calls from Ukrainian officials and the United Nations secretary general, António Guterres, for a humanitarian corridor to evacuate civilians.

Supplies within the plant are said to be running extremely low. “It is not a matter of days, it’s a matter of hours,” Mariupol’s mayor, Vadym Boychenko, told a news conference on Friday.

“If Mariupol is hell, Azovstal is worse.”

Russia views capturing the port city as crucial to its aim of securing a land bridge along Ukraine’s south to connect Crimea to the Donbas, and its forces have been shelling the plant relentlessly. The devastation there — city officials have said that tens of thousands of residents have been killed — stands as one of the largest humanitarian crises of the war.

“We are filming these videos to draw attention to the fact that they are at the plant, so that the enemy does not say there are no civilians here,” Capt. Svyatoslav Palamar, the deputy commander of the Azov regiment based at the factory, told The New York Times in a text message.

“So that they can be evacuated.”

The Times could not independently verify the exact location of the videos, but the interiors appear consistent with the design of the plant, and a former employee familiar with the premises confirmed that the images seemed to have been created there.

Since April 18, Azov has released several videos that focus on civilians who say they are trapped at the plant, and feature mostly women and children. “I want everyone who sees this video to help us create this green corridor, to help us leave here,” said one mother holding her toddler in a video released on April 24, when Ukraine was observing Orthodox Easter. “Safely. Alive. The civilians and the soldiers.”

While Azov is a party to the conflict, The Times has previously verified footage released by the group. In the recently shared videos, Azov soldiers pass out treats to children and converse with adults. The relationship between the soldiers and the people who appear on camera, and the circumstances under which these images were produced, are unclear.

Graphic pictures shared on April 26 on social media accounts related to the regiment showed injured people lying on stretchers on a concrete floor, in what was said to be a field hospital within the steel plant.

Two days later, Azov uploaded a video to its social media channels of what it said was the aftermath of Russian strikes on a field hospital inside Azovstal. The footage showed about two dozen people, some of them wearing casts and bandages, sitting inside a dim, hazy room. A man with a headlight is seen digging through rubble. Another one is holding a plastic bottle in his shaky hand and sobbing.

“The strike was made on the area which contains the heavily wounded,” Mikhail Vershinin, head of the Donetsk Regional Patrol Police, said in a voice memo from inside the plant. “People are buried under rubble, some have died. There are wounded — wounded on top of the wounds they already had.”

The Azov regiment was initially created in May 2014 as the Azov Battalion, named for the body of water where Mariupol and its now-destroyed port are, to defend the city when it came under attack by pro-Moscow forces. At the time, it was known for its nationalist, far-right members, which has been used by the Kremlin to justify its military campaign as having “antifascist” aims.

The group’s controversial reputation lingers, and though it still has some nationalist members, analysts say the unit, now called the Azov regiment, has evolved since its was incorporated into the regular combat forces of the Ukrainian military.

Some troops have been inside the plant since March 1, Captain Palamar told The Times.

Maria Zolkina, a Ukrainian political analyst who works at the Democratic Initiatives Foundation, said the regiment’s leadership made a concerted decision to go public with their pleas for evacuation and extraction because they felt they had run out of alternatives.

“They started being as public as possible when their division in Mariupol became fully encircled,” she said, noting that they probably felt they no longer had the option to push Russian forces back militarily, or had lost hope of successful negotiations between the two sides.

“The city has been practically wiped off the planet,” said one commander, identified as Serhiy Volyna, in a video uploaded on Wednesday, purportedly from inside the plant. In a three-minute plea, he said that more than 600 injured troops, along with “hundreds of civilians and tens of children” would perish if a humanitarian corridor could not be organized.

“Please save the city of Mariupol,” he implores. “Please organize an extraction procedure.”