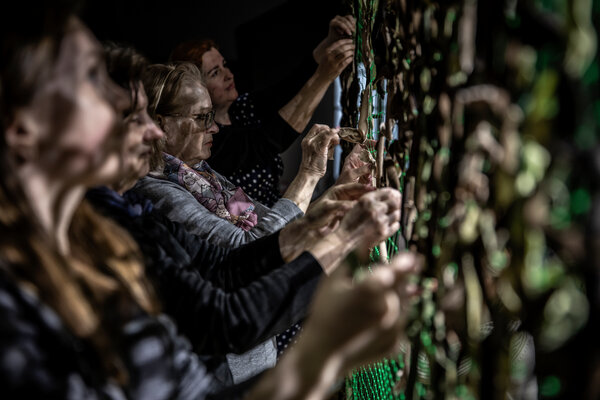 The city of Severodonetsk was built around the sprawling Azot fertilizer factory. Now the factory that has become home for many of the city’s remaining residents, who have been forced to hide in bunkers beneath it to escape relentless bombardment by Russian forces.

“I am trying to persuade people to leave, but they stay, many still in the bomb shelters of the Azot plant,” said Arif Bagirov, an activist in the city who on Friday described by telephone what daily life looks like as Russia presses its offensive in eastern Ukraine.

Moscow announced the start of the renewed offensive in the eastern Donbas region nearly two weeks ago but has yet to score any major territorial advances.

“We would assess that Russian forces are making slow and uneven and, frankly, we would describe it as incremental progress in the Donbas,” a senior U.S. defense official said Thursday, speaking on the condition of anonymity to discuss operational details.

Russia, following a strategy dating back to Soviet times, is relying on artillery to pound Ukrainian forces all along a 300-mile front. Ukrainian forces are ceding small patches of territory only to then push to take them back, according to military analysts.

On Friday, Russia announced gains in several towns, and the Ukrainians said that they had regained control of a strategically important settlement on the highway that leads from Kharkiv to Belgorod in Russia.

Besides giving the Ukrainians control over a stretch of highway critical to Russia’s supply lines, the suburb of Ruska Lozova had been used by Russian forces to fire artillery rounds at civilian buildings in Kharkiv. Residents streaming out of the village on Friday, however, said the Russians were counterattacking and that the village was still being fiercely contested.

It is hard to assess claims by Russia and Ukraine in the Donbas because fighting has limited the ability of journalists to travel across the region. So far, the only major city in the region to be seized by the Russians is Izium, south of Kharkiv, which is now a key logistical anchor for Russian forces trying to push south.

Much of the heaviest fighting in recent days has taken place along the same front line that divided Ukrainian forces and Russian-backed separatists after Moscow orchestrated the region’s rebellion against the Ukrainian government in 2014.

That includes Severodonetsk, which fell under Russian occupation in June 2014 and was liberated a month later. It remains under Ukrainian control and the city, built on sandy soil and surrounded by pine forests, has served as the temporary capital of the Luhansk region. (Separatists control the city of Luhansk.)

From the first day of the war, Severodonetsk has been under almost constant Russian bombardment, leaving it in ruins and largely abandoned.

An estimated 70 percent of all the buildings are damaged. Only 20,000 of the 100,000 residents remain, and many only leave their bunkers to go to distribution centers to collect food. Recently, Russian shells landed near people waiting in line for food, according to Román Vasylenko, the head of Severodonetsk regional military civil administration. He said many were injured but did not offer a precise toll. Now, he said, many people are too scared to even venture out to collect food.

Mr. Vasylenko’s administration covers six towns and cities currently being fought over. The Russians have taken control of Kreminna and have partially occupied Rubizhne and Popasna, he said. Severodonetsk, Lysychansk and Hirske all remain under Ukrainian control.

Mr. Bagirov, the local activist, said that he tried to focus on the positive. As he makes his rounds delivering food, he has seen some people outside looking after their gardens as shelling is heard on the city’s outskirts. “Different people experience this war differently,” he said.With shells exploding day and night, he said he knows death might come at any moment. But, he added, he will die with honor. And if the Russians do enter the city, he said, he has only one choice. He will fight.