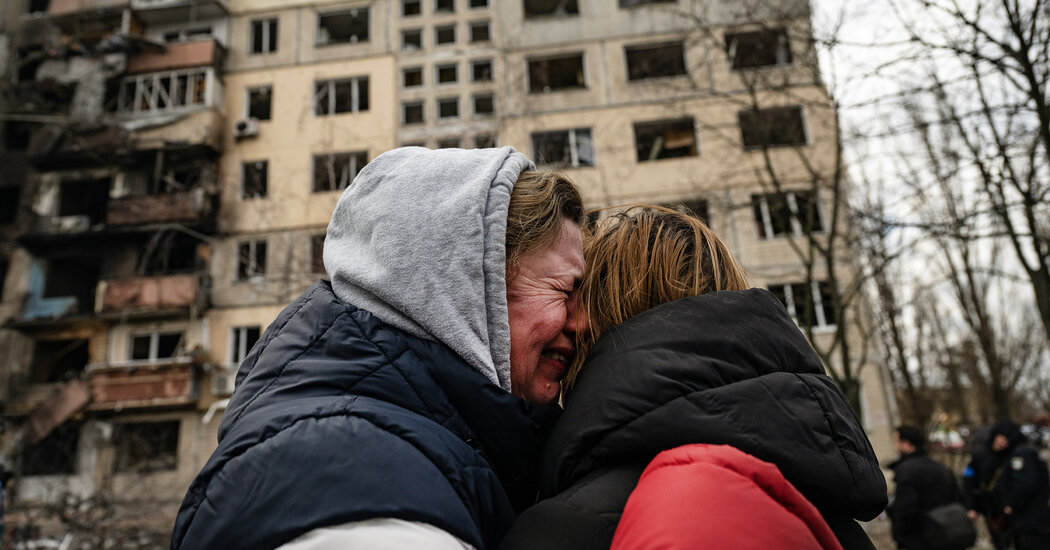 LVIV, Ukraine — Hundreds of people escaped the besieged Ukrainian city of Mariupol by car on Monday, according to the local government, even as a convoy of vehicles carrying food, water and medicine slowly tried to find a safe path through the battle raging around the city.

Relatives of those still living in Mariupol said fleeing seems to offer the best, and perhaps only, chance for survival.

“I do not believe the humanitarian convoy will be a big help,” said Oleksandr Kryvoshapro, a humanitarian activist whose parents are in Mariupol. “Too many people are still there. And this once beautiful, big and constantly developing city is now completely destroyed. It is not possible to live there anymore. All people need to be evacuated.”

An estimated 400,000 people are trapped in the city, which is entering its second week without heat, food or clean water. Attempts to reach the city and evacuate people have failed day after day amid heavy fighting. The convoy on its way Monday was carrying 100 tons of relief supplies, officials said.

Russia has been laying siege to the city, a major industrial hub on the Azov Sea, creating a humanitarian catastrophe that led the International Committee of the Red Cross to issue an urgent appeal for a cease-fire to assist the hundreds of thousands of people with no access to clean water, food or heat.

“Dead bodies, of civilians and combatants, remain trapped under the rubble or lying in the open where they fell,” the I.C.R.C. said.

The Ukrainian government estimated on Sunday that more than 2,000 people have died — nearly double the estimate from just a day earlier.

The hundreds who managed to get out on Monday morning left the city in 160 cars and their escape was kept secret until they were deemed a safe distance away, according to Ukrainian officials. They were still on the move Monday afternoon, its exact location and route a guarded secret.

The group was expected to reach the city of Zaporizhzhia, where they will be given access to first aid and accommodations. If they do get there, it would offer a glimmer of hope.

With mass graves now being used to bury the dead in Mariupol and international aid groups warning that large numbers of people are on the verge of starvation, it remains exceedingly difficult to get an accurate picture of what was happening there as nearly all communication has been severed.

Mr. Kryvoshapro, the activist, said his contact with people inside lasts a few seconds each day when they “go out into a dangerous location where they can find a signal.”

This morning, he got some positive news.

In that way, he said, he was fortunate. “So many people now cannot get in touch with their relatives,” he said.

Halyna Odnoroh, who is from Mariupol but is now in Zaporizhzhia, said she had gotten word from one of the people who escaped on Monday.

“My colleague has a friend who is one of the drivers there, and all he could say is that they keep moving and keep trying,” she said.

The hardest part to comprehend, she added, is that there are so many people struggling to survive. Even if the convoy arrives, hundreds of thousands will still be in urgent need of help.