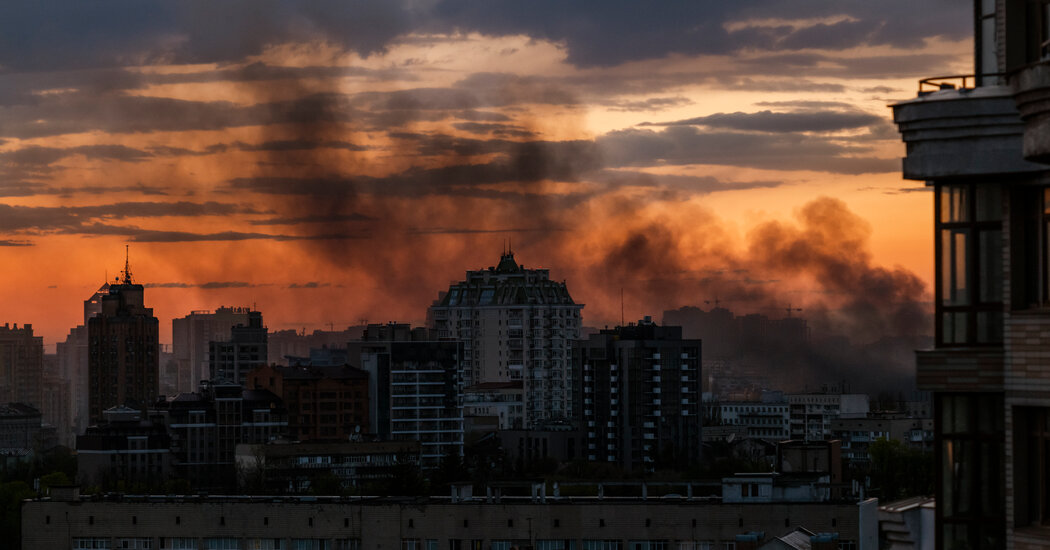 Russian efforts to subdue the southern Ukraine city of Kherson continued Thursday, as officials introduced the ruble amid renewed resistance from residents.

Russian officials told RIA Novosti, a state news agency, that the city would use the ruble as of May 1. That came a day after hundreds of Ukrainians protested following a declaration by Moscow that soldiers had “liberated” the entire region.

People gathered in the city’s central square on Wednesday morning, according to footage from the scene verified by Storyful, a company that monitors social media for newsworthy video. The videos show some protesters wearing Ukrainian flags. One group, carrying a banner, can be heard chanting “Kherson is Ukraine.”

In one video, the crowd in the square disperses after a puff of smoke and a brief flash of light. People can be seen running and coughing. Another video appears to show an injured protester lying on a bench as someone stands above them, pouring water over a wound on their torso.

Russian troops seized Kherson, a strategically important Black Sea port just north of Crimea, early in March after a battle with Ukrainian forces that left more than 300 people dead, including dozens of civilians.

For weeks, some residents have returned to the streets in defiance of the Russian forces. The gatherings have been some of the most visible scenes of resistance to the Russian occupation, underscoring the challenge Moscow faces as its soldiers try to hold areas against the will of the local populace.

The city’s mayor, Igor Kolykhaev, wrote on Facebook that Russian soldiers had assumed control of the City Council building on Monday evening, taking his keys and replacing the security staff. In a video statement on Tuesday, he said that Russian officials tried to replace him with one of their own. Mr. Kolykhaev has been replaced, Russian officials say, but he has not stepped down.

“But the powers of the mayor were entrusted to me by the residents of the city of Kherson,” he said in the video. “I refused to cooperate with the new administration. Kherson is Ukraine.”

The mayor did not respond to requests for comment.

President Volodymyr Zelensky of Ukraine has accused Russia of planning to hold a sham referendum in Kherson to justify installing an illegitimate government, similar to the self-declared “people’s republics” that Moscow-backed separatists established in Ukraine’s eastern Donbas region.

The rising tensions have led thousands of Kherson residents to flee to nearby Ukrainian-held cities, like Odesa and Kryvyi Rih, officials say.

Oleksandr Vilkul, the mayor of Kryvyi Rih, said in a statement posted to Telegram on Monday that over the past three days his city had welcomed at least 5,000 people from Kherson, which is 115 miles to the south.

“People are leaving on bicycles, and taking old people and children in wheelbarrows,” he said.

Maria Bohdukhova, 23, said she decided to flee Kherson on Monday, shortly after hearing rumors that the Russians had plans to block residents from leaving and entering. She and her mother left for Odesa by car.

“As soon as we heard they might close off the city, we knew it was time to go,” she said. The road was jammed with cars and they had to pass through many checkpoints, she said. When they spotted Ukrainian soldiers as they left Russian-held territory, her mother jumped from the car, in tears, and embraced the first soldier she could reach.

“I can’t describe the feeling of seeing soldiers from your own country for the first time after two months of living with Russian forces,” Ms. Bohdukhova said. “It finally feels like we are living again, not surviving.”

Ms. Bohdukhova said life under Russian occupation was depressing and terrifying. Russian soldiers were ubiquitous on street corners and in shops. “They think because we speak in Russian, we will want to be a part of Russia,” she added. “How can this ever be the case, when they’ve bombed our buildings and terrorized our people?”