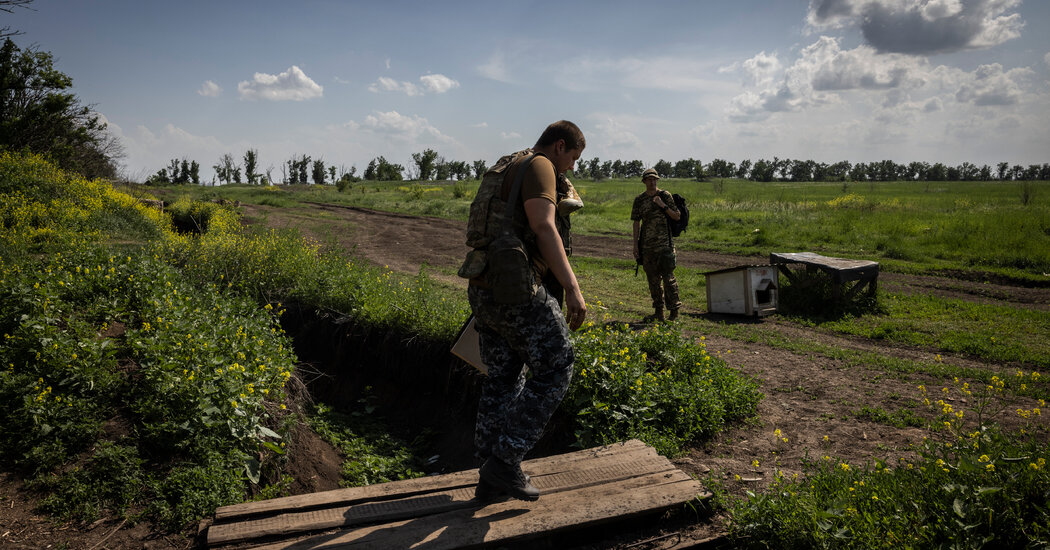 SIVERSK DISTRICT, Ukraine — One of the few civilians still driving on a road leading toward the battle front, Oleksandr Chaplik skidded to a stop and leaned out the car window to swap information with a villager.

He was taking supplies back to his village, one of a handful still in Ukrainian hands that lie in the path of the Russian advance.

“We are surrounded on all sides,” said Mr. Chaplik, 55, a dairy and livestock farmer. “It is the second month without light, without water, without gas, without communication, without the internet, without news. Basically, horror.”

Mr. Chaplik owns about 75 acres of land near the city of Sievierodonetsk, where Russian and Ukrainian troops have been battling for control in heavy street fighting in recent days. The countryside around his farm is under almost constant bombardment by Russian forces trying to encircle the easternmost Ukrainian forces and lay siege to Sievierodonetsk and Lysychansk.

The roar of multiple rocket launcher systems being fired south of the farm rattled the windows and doors of his home. “Don’t worry, those are Ukrainian,” he said as he gave a tour of his farm. “Here, thank God, the guys are holding firm.”

But the war has come dangerously close. Craters from bombs and artillery shells scar his fields. Leaning against the wall of one of his barns stood the casings of a dozen rockets that Mr. Chaplik had collected from around the farm. The rockets delivered cluster bombs, he said, which still littered his hayfields.

“They want to be eating grass,” he said as he walked down the stalls of his 35 dairy cows. “But I cannot let the cows loose on this grass because of these bombs, and I am scared they will fall in the bomb craters.”

Mr. Chaplik is a fraying connection to the world for his increasingly isolated village, which he asked not be named so it would not suffer retribution from Russian troops. At considerable risk to himself, he provides vital supplies and information, and keeps producing food as best he can.

But as the war has crept closer, he has had to shrink his business while trying to keep the farm producing and workers fed and paid. With utilities cut off, he runs the milk machines on generators, but can only operate his refrigerators for 12 hours a day.

“We used to make nearly 100 different milk products,” he said. “I have a two-years-old Parmesan cheese. I made unique products that no one else was making, sour cream, cream, mozzarella, burrata.”

But without electricity he has had to cut down on production. There was a shortage of containers, he added. He removed two cheeses with moldy rinds from a fridge. “They are no good,” he said.

He has moved his food production operations to several different parts of the country, placing part of his dairy production in the nearby market town of Bakhmut, where he already has an organic meat and dairy shop, and relocating his meat production plants to the relatively safe cities of Dnipro and Lviv.

His family has moved, too. His wife is a teacher and two of his children are university students, so they needed to go somewhere with the internet to be able to keep working, he said. They were calling him daily, pleading with him to join them, but he said he still had work to do.

His work force has contracted, as many villagers left with their families for safer parts of the country. “I have fields and machines and diesel but I do not have the workers,” he said. But he pulled together the 10 workers who remained, so they now live and eat together.

Two teenage girls were mucking out the cow stalls. “They are the daughters of my workers. They are children, but I have no workers,” he said.

A pensioner, Lyudmila, 68, has stepped in to run his shop in the village.

“Did you get cucumbers?” she called out, as Mr. Chaplik unloaded bottled water and fresh vegetables from his van.

“Without him we would be lost,” she said. Villagers could not travel to the market, and prices there were much higher anyway, she said.

But the strain shows on Mr. Chaplik’s face. He looks like he has not slept in days. He complained of toothache and a twitch around his eye. One of the hardest things, he said, was fielding the panicked telephone calls from relatives trying to reach the villagers who have remained behind. The cellphone service in the village has been knocked out but they know that Mr. Chaplik drives into town every day to the market, where cell service continues, and they bombard him with calls.

“My nerves are cracking,” he said, as he declined another phone call. “I am working 14 to 15 hours a day. Physically I am tired.”

So now he is arranging for his son to bring in a mobile antenna, so the villagers can be in touch with their relatives.

He sees more problems on the horizon. The war has disrupted farming and food production to such an extent that people in eastern Ukraine could go hungry in coming months, he warned.

The potatoes are already planted, which will provide food for the villagers, he said, but meat and milk will become scarce.

“If I do not prepare feed for my cows they will die this winter,” he said. “I cannot cut the hay because of the cluster bombs in the fields and I need 12,000 bales of hay and I do not have the workers.”

And as he follows the progress of the war, and the steady advance of Russian troops, he said it was likely that they would seize control of the village and he would lose the farm that he built up over more than 20 years.

Separatist forces backed by Russia seized the area in 2014 but were pushed back after a few months. But this time he said he did not expect President Vladimir V. Putin to stop. The Russian leader wants to seize a swath of the country from the city of Kharkiv in the northeast to Odessa in the southwest, he said.

“He will not calm down,” he said. “He will fight for a year, two, three, until he reaches his goal.”

Mr. Chaplik has been slaughtering his pigs, so only one remains, slumbering in his pen. The newborn calves will have to be slaughtered too, he said. “It’s a shame.”

If the Russians came, he added, he would have to leave his guard dogs, six German shepherds. “I could not bear to put them down,” he said. “I will let them loose.”

If the shells came too close, he would take his workers and leave, he said. “I will start anew,” he said. “Give me a little piece of land, in Ukraine, in the United States, wherever. I can build a great business again.”