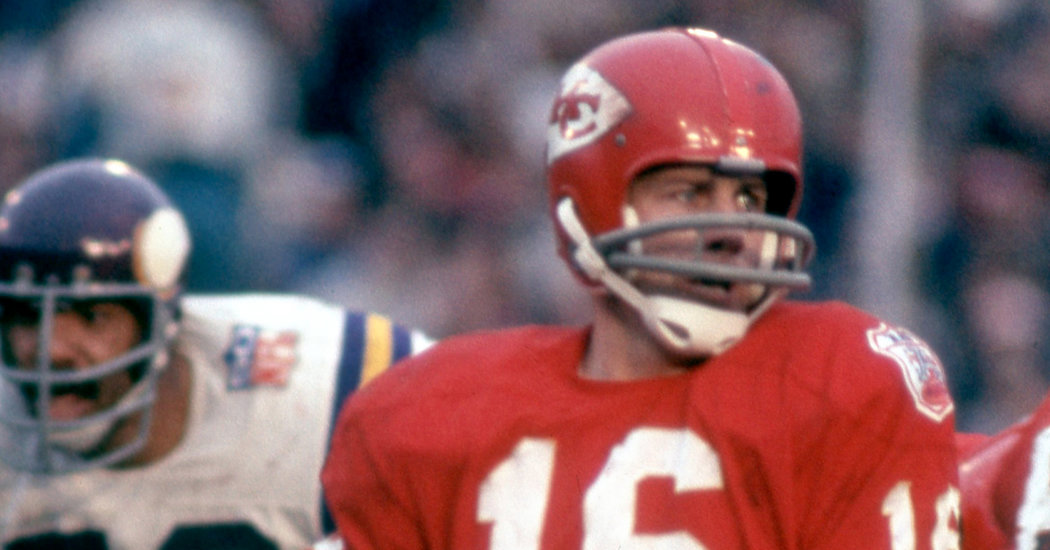 Len Dawson, the Hall of Fame quarterback who spent his first five pro football seasons as a seldom-used backup but went on to take the Kansas City Chiefs to their first Super Bowl championship, died on Wednesday. He was 87.

His death was announced by his family in a statement. The statement did not say where he died or specify a cause.

Dawson, who played professionally for 19 seasons, 13 of them in Kansas City, was known as Lenny the Cool. A slender 6 foot 1 and 190 pounds, on the smallish side even for his era, he played with little visible emotion. But he was a pinpoint passer who seemed impervious to pressure and a six-time All-Star in the old American Football League.

Hank Stram, the Chiefs’ longtime coach, who gave Dawson a chance to be a starter in the A.F.L. after his unhappy time with the N.F.L.’s Pittsburgh Steelers and Cleveland Browns, once called him “the most accurate passer in pro football.”

Dawson was a quiet type who led by example. “I’ve never heard him raise his voice,” the Chiefs guard Ed Budde once said. “When you do something wrong, he just gives you that look and you know you had better shape up.”

He was best remembered for coming back from a serious knee injury to take the Chiefs to a stunning 23-7 victory over the Minnesota Vikings in Super Bowl IV in January 1970 — the team’s only Super Bowl championship until 2020.

As that game neared, Dawson had faced pressure to prove he was in prime shape after missing five midseason games because of his bad knee. But another burden shadowed him as well.

NBC had reported that the federal authorities wanted Dawson, Joe Namath of the Jets and several other pro football players to appear before a federal grand jury in connection with a string of New Year’s Day arrests of reputed gamblers in a nationwide sports betting ring. The Justice Department did not confirm the report, but Dawson, while denying any connection to gambling, told reporters that he had a “casual acquaintanceship” with one of the men who had been arrested.

Seemingly unfazed by the headlines, Dawson closed out the Super Bowl scoring by combining with receiver Otis Taylor on a 46-yard third-quarter touchdown play in the face of a blitz. He was named the game’s most valuable player and received a congratulatory phone call from President Richard M. Nixon. The players cited in the NBC report were never accused of wrongdoing.

Namath had taken the Jets of the A.F.L. to a stunning 16-7 victory over the Baltimore Colts in the 1969 Super Bowl. That upset was a prelude to the Chiefs’ championship victory, which cemented the league’s credibility preceding the completion of the A.F.L.-N.F.L. merger.

“That was huge for us,” Dawson told The Times-Picayune of New Orleans long afterward. “We were the not-ready-for-prime-time guys from the A.F.L., and we made it two in a row.”

Leonard Ray Dawson was born on June 25, 1935, in Alliance, Ohio, the ninth of 11 children of James and Annie Dawson. He became a star quarterback for Purdue when Stram was an assistant coach with the Boilermakers, then was selected by the Steelers in the first round of the 1957 N.F.L. draft. But he was a backup in his three seasons with them and two seasons with the Cleveland Browns.

He considered quitting football after the 1961 season, but Stram — who had become the head coach of the Dallas Texans, one of the A.F.L.’s eight original teams — wanted him. “He basically said, ‘If you ever get free, let me know. I’d love to have you on my team,’” Dawson once told The Springfield News-Leader of Missouri. Dawson asked the Browns to put him on waivers, and the Texans claimed him.

Dawson took the Texans to their first A.F.L. championship in 1962, the league’s third season, with a 20-17 victory over the Houston Oilers in double overtime. He was named the league’s player of the year. Lamar Hunt, the Texans’ owner, moved the team to Kansas City for the 1963 season, renaming it the Chiefs, and Dawson took the Chiefs to an A.F.L. title in 1966, though they lost to the Green Bay Packers, 35-10, in the first Super Bowl.

“You would never have heard of my name if it hadn’t been for Lamar Hunt hiring Hank Stram,” Dawson once told The Kansas City Star.

Dawson, who retired after the 1975 season, threw for 239 career touchdowns and 28,711 yards. He led the A.F.L. in touchdown passes four times and in passing completion percentage six times. He was elected to the Hall of Fame in 1987.

Survivors include his wife, Linda. Complete information on survivors was not immediately available.

Dawson was a longtime radio analyst for Chiefs games and a television broadcaster for NBC and HBO. The Hall of Fame presented him with its Pete Rozelle Radio-Television award in 2012.

He looked back wryly on the start of his broadcasting career, when he reported on sports for KMBC television and radio in Kansas City in the evenings while he was still playing.

“The Chiefs recommended me,” he once said. “They felt if they had one of their people on the sports at 10, there would be one station not ripping the football team.”

Dawson was a signature figure in Chiefs history. “We started calling him the Governor,” his former teammate Emmitt Thomas told The Star in 2013. “To this day, I call him Governor. He was the guy here in Kansas City.”