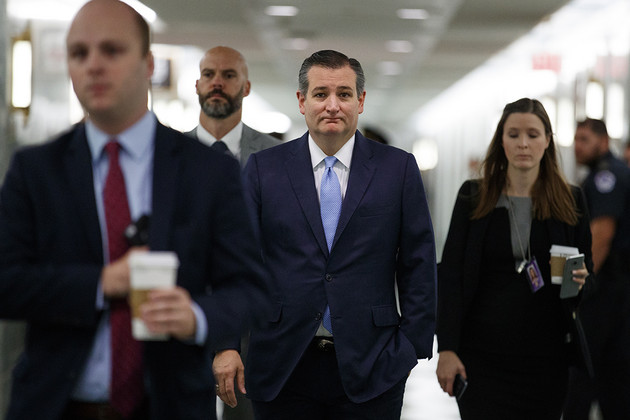 And while Hawley denied in an interview that he planned to chase the White House, Cruz was more open to the idea. He said of his future ambitions: “I am committed to the fight. And the presidential campaign in 2016 was the most fun I’ve ever had in my life. And we came very, very close the last time.”

On Thursday, Hawley and Cruz spoke back to back to wind down the first day of the Conservative Political Action Conference in Orlando. Going first, Cruz went after big business and White House press secretary Jen Psaki — whom he called “Peppermint Patty” — while Hawley defended his decision to object to the 2020 election and said he will introduce oil and gas legislation on Monday to send a message to Russia.

That type of maneuvering, along with their tactics in the Senate, has Republicans watching the two senators very closely.

“Ted Cruz has run before. I’m sure he’s thinking about it. Josh Hawley probably is as well,” said Sen. Mitt Romney (R-Utah), the GOP’s 2012 presidential nominee. But he explained it’s not just those two: “Tim Scott, Rick Scott, Marco Rubio: The list has gotta be long.”

The 2024 field within the Senate GOP could certainly get cramped; add to Romney’s suggestions senators such as Tom Cotton of Arkansas, Marsha Blackburn of Tennessee and 2016 candidate Rand Paul (Ky.).

“If Trump doesn’t run, I think everybody runs. Every name you’ve heard, every name you haven’t even heard,” Cruz said.

Hawley and Cruz insist there’s no rivalry between them as the GOP waits on Trump’s decision on whether to run for president a third time. Cruz calls the Missouri senator “talented” and Hawley says he and his Texas colleague are not at odds.

Yet Republicans, including those who might compete against them in 2024, are nonetheless closely watching a Hawley-Cruz chess match that’s been playing out ever since Trump lost the election. Five days after Hawley announced his plans to object to the 2020 election results in late December 2020, Ted Cruz announced his own plan to reject Biden’s win.

Cruz’s aides consistently distinguished to reporters that his tactics were distinct from Hawley’s. In the aftermath of the Capitol insurrection, the two both faced an unresolved ethics complaint from a group of Senate Democrats. And Hawley filed a counter-complaint.

These days, the two are proxy battling in Hawley’s home state of Missouri, where fellow Republican Sen. Roy Blunt is retiring. After Hawley endorsed Rep. Vicky Hartzler in the state’s Senate race this month, Cruz quickly followed suit and backed his own candidate, Eric Schmitt, who just so happens to have Hawley’s old job as attorney general.

“If Trump doesn’t run, I think everybody runs. Every name you’ve heard, every name you haven’t even heard.”

“Of course they are … I can tell when somebody’s interested in running for something,” said one Republican senator who knows both. This senator was “surprised” to see Cruz put himself at odds with Hawley in his Missouri endorsement: “All you do when you endorse is make enemies.”

While Hawley said the two have generally discussed the Missouri race, Cruz said he did not tell Hawley about his endorsement beforehand. He asserted Schmitt “is the strongest conservative in the race and is best positioned to win the seat,” while Hawley said Hartzler “is a person of great character and integrity” who could win both the primary and the general election.

Hawley declined to tell Cruz to butt out of his state: “I wouldn’t tell people what to do.”

Counterintuitively, Republicans are welcoming the Missouri competition between Cruz and Hawley since neither endorsed Eric Greitens, the scandal-tarnished former governor who some in the GOP fear could hand Democrats the seat in a general election. A second Republican senator, granted anonymity to assess the internal dynamics, put it this way: “The Republican Conference would like to see anybody nominated other than Greitens.”

Though both Cruz and Hawley share their penchant for high-profile battles with Democrats, their styles often contrast. Cruz ran his 2016 campaign against Senate GOP Leader Mitch McConnell and the Republican establishment, and has criticized his leadership’s handling of the debt ceiling last year. In comparison to Cruz’s more doctrinaire conservatism, Hawley has pushed a populist agenda — including pandemic stimulus checks — and is generally less combative than Cruz within the Senate GOP.

“In the Senate, I think we’re great allies,” Hawley said of Cruz. “I’m sure we don’t agree on every issue.”

Just as Rubio, Cruz and Paul fought to position themselves as the frontline counter to Democrats and former President Barack Obama in the run-up to 2016, Cruz and Hawley seek now to be the toughest on Biden. While the two Republicans have employed the same tactics to slow-walk Biden’s nominees, their blockades have targeted different aspects of the president’s foreign policy.

Cruz began delaying Biden’s State Department nominees last year after the administration waived mandatory sanctions on the Nord Stream 2 natural gas pipeline. He lifted his holds this week after Biden reversed course and imposed sanctions on the Russia-to-Germany pipeline, a reaction to Russia’s aggression in Ukraine.

Hawley’s blockade stems from the U.S. withdrawal from Afghanistan and involves Pentagon nominees. The Missouri Republican has vowed to slow-walk those picks until Biden fires a senior official over the chaotic and deadly U.S. exit from the country last year.

Hawley and Cruz also have different strategies on Biden’s pending decision on a Supreme Court pick, though they both consistently oppose the president’s judicial nominees. Cruz has criticized Biden’s pledge to nominate a Black woman to the high court, while Hawley has publicly pushed for Biden to select Janice Rogers Brown, a former judge on the D.C. Circuit, who is clearly not in the running due to her more conservative record. Both senators serve on the Judiciary Committee, a long-favored panel for presidential hopefuls in both parties.

“They both have their own approaches,” said Senate Judiciary Chair Dick Durbin (D-Ill.) “Cruz is always on the attack no matter who the nominee is. Hawley takes a little different approach.”

Early surveys show that Trump is still the clear favorite for the 2024 nomination should he run, with Cruz in the top tier and Hawley — who, of course, says he’s not running — further behind. Republicans expect it to stay that way for some time.

“Until there’s a clear indication of what Trump’s gonna do, it’s going to be hard for people to get traction,” Rubio said.

Marianne LeVine and Andrew Desiderio contributed to this report.