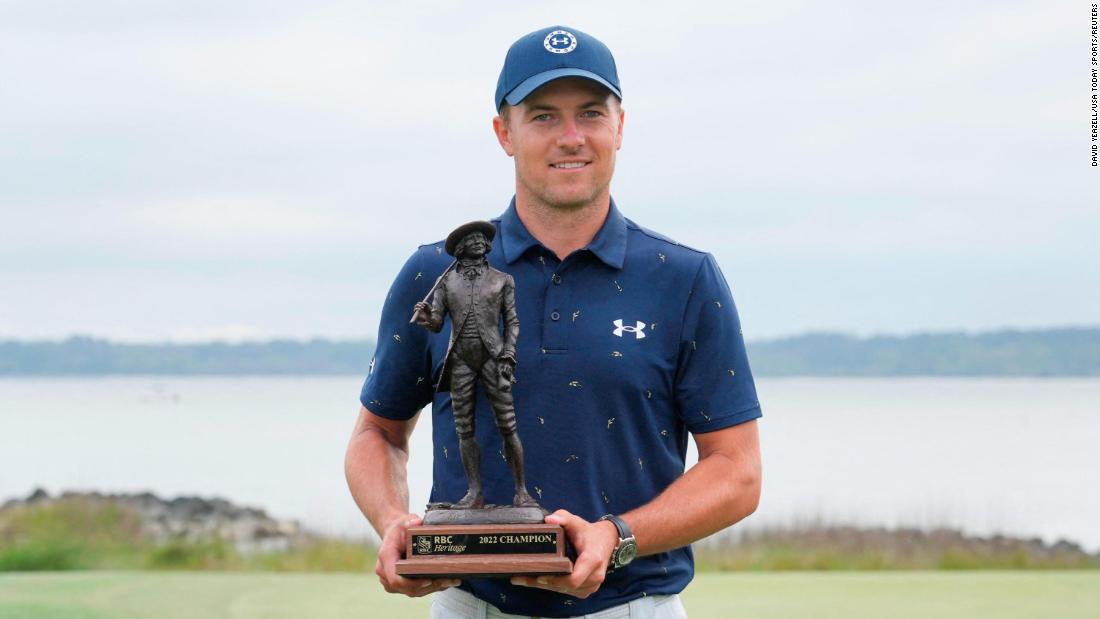 The American beat his compatriot on the first hole of their sudden-death playoff at Harbour Town Golf Links, recording a par while Cantlay could only register a bogey.

It capped off a remarkable Sunday for Spieth, who roared into contention with a five-under 66 — including two eagles in the opening five holes — setting the clubhouse lead at 13-under par.

Cantlay carded a final-round 68 to join Spieth at the top of the leaderboard, but after both players found the bunker on the 18th hole in the playoff, Spieth produced a moment of magic from the sand to claim his 13th PGA Tour victory with FedExCup champion Cantlay only able to find the back of the green with his bunker shot.

Afterwards, three-time major winner Spieth praised his wife, Annie, for instilling some calm in him after a disappointing round on Saturday.

“I was about as upset after the round yesterday as I’ve ever been in a golf tournament,” Spieth told the media.

“There’s just no excuse for those kind of brain farts as a professional to myself, but also to Michael (Greller), who’s working his butt off, to go out there and do that, that could potentially affect the outcome of a tournament. And I’ve done that a number of times on this stretch in the last four weeks.

‘Greatest par of my life’

A deer was the star of the show on Friday, when it broke from the trees and proceeded to prance down the fairway while the former world No. 1 took some practice swings.

And there were still more surprises thrown up by the course in Sunday’s final round, in particular for South African Dylan Frittelli.

On the par-four sixth hole, Frittelli hit his drive which drifted left and into a group of trees.

Instead of finding his ball on the floor with an awkward angle to the green, it was even more challenging for the 31-year-old.

His ball had been caught in the branches of the tree, coming to about his eye level. So to avoid taking a drop and a penalty, Frittelli grabbed his putter and hit it out of the tree and onto the fairway.

From there, he hit his iron shot onto the green and drained the putt to save what looked to be a remarkable par.

Or that’s what he thought at the time.

“I thought this would be the greatest Par of my life,” Frittelli tweeted. “I was assessed a 2-stroke penalty for ‘standing astride’ my intended line of play during this shot. The rules of golf remain undefeated.”

He finished one-over par and tied for 66th in the field.