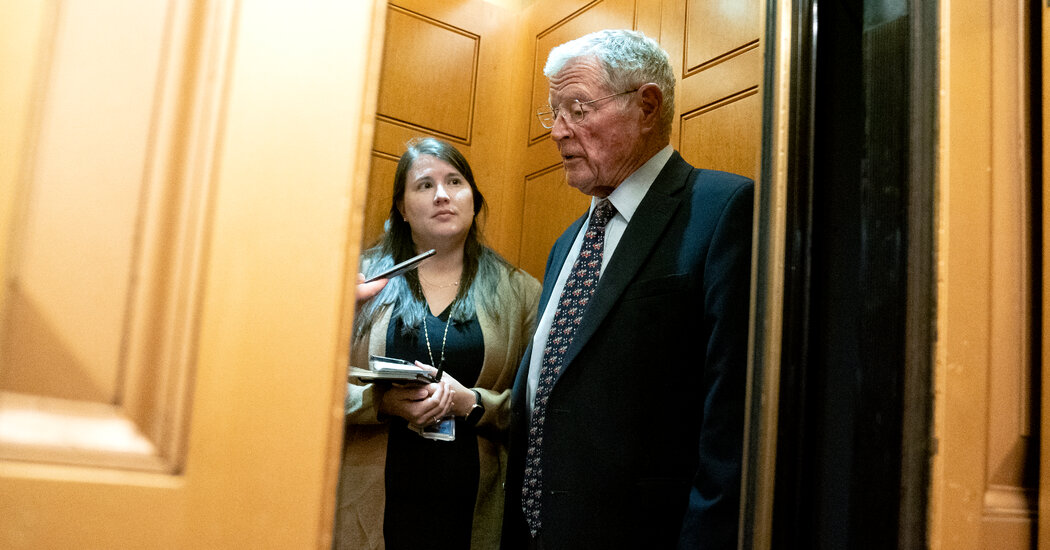 Senator James M. Inhofe, Republican of Oklahoma, has told officials in his state that he will step down at the end of the year, vacating a seat he has held since 1994 with four years remaining in his term.

Mr. Inhofe, 87, was poised to announce his plans on Monday, according to two Oklahoma Republicans who spoke on the condition of anonymity because they were not authorized to comment in advance. His retirement is unlikely to affect the balance of power in the 50-50 Senate, given Oklahoma’s solidly Republican leanings.

A conservative and the top Republican on the Senate Armed Services Committee, Mr. Inhofe has cruised to re-election, most recently in 2020.

While he will leave his seat well before his term expires at the beginning of 2027, Mr. Inhofe is not planning to quit before the end of this year, he has told people. By waiting to make his announcement next week, he will assure that he can be replaced in a special election, rather than by an appointment by his state’s governor.

That is because of a new state law in Oklahoma that limits the window for a governor to fill vacancies before a regularly held election. The contest to fill Mr. Inhofe’s seat will most likely be held in conjunction with the midterm congressional elections in November.

Potential Republican candidates to succeed Mr. Inhofe include Matt Pinnell, the state’s lieutenant governor; T.W. Shannon, the former speaker of the Oklahoma House of Representatives; and R. Trent Shores, a former U.S. attorney in the state. Other possible contenders include most members of Oklahoma’s House delegation.

Mr. Inhofe, a stalwart of the ideological right, has a penchant for grand gestures to make a point. He flew a plane upside down in a re-election advertisement in 2020 to show he was still fit for office even in his mid-80s. As the chairman of the Environment and Public Works Committee in 2015, he threw a snowball across the Senate floor in an attempt to undermine the validity of climate science.

Mr. Inhofe has been vociferous in his support for a muscular American military presence around the globe. Intent on increasing the nation’s defense budget, he is seen as a hawkish guardian of one of Congress’s key responsibilities: passing the annual defense policy bill. In 2020, Mr. Inhofe led his party in a rare break from President Donald J. Trump to pass the crucial legislation over his objections.