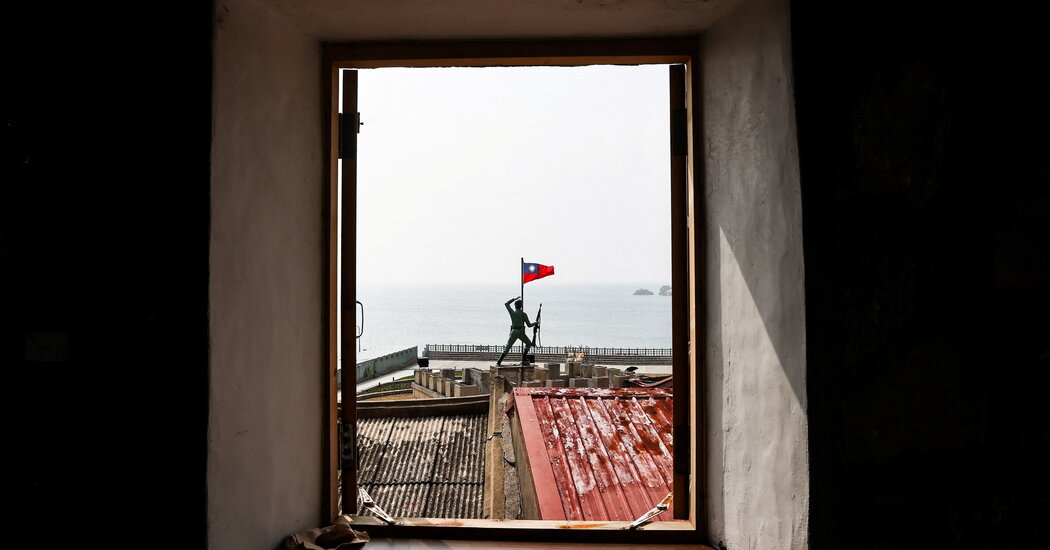 Russia’s invasion of Ukraine has amplified fears that the world is teetering back to a Cold War-like era in which the most powerful countries compete for dominance.

That could mean not only Russia exerting control over Eastern Europe but also China imposing itself over East and Southeast Asia — particularly Taiwan.

China has laid claim to Taiwan since the island split off from the mainland in 1949 and has threatened to forcibly reunite the two. It views the issue as a top priority: Days after Russia’s invasion, Chinese officials reiterated that they were committed to “resolving the Taiwan question.” In a Friday call with President Biden about Russia’s invasion, China’s leader, Xi Jinping, seemed more concerned about the fate of Taiwan than the war in Ukraine.

China, like Russia, appears to see a void after Western powers pulled back from the world stage, sidelined by internal disputes and the failed U.S. wars in Iraq and Afghanistan. In the West, a Cold War victory had convinced many that a new democratic world order would keep the peace — without realizing how fragile that peace really was.

“People forgot about great power politics,” said Jennifer Lind, an expert on East Asia at Dartmouth College. “People had hoped we had transformed international politics, and we didn’t.”

But Russia’s failure so far to overpower Ukraine, and the West’s rush to punish and isolate Russia for its invasion, should make great or rising powers skeptical of similar incursions, experts said.

China, after all, has benefited from the relatively peaceful world order of recent decades; it transformed into the only real economic rival to the U.S. as the world became increasingly integrated. An invasion of Taiwan could disrupt that order and potentially isolate China from the global economy, as Russia’s experience has shown.

So what happens in Taiwan will likely be influenced by what happens in Ukraine. If Russia succeeds in overtaking Ukraine, it increases the danger for Taiwan. If Russia ultimately retreats, or suffers lasting, damaging consequences, that could be good news for the island.

Because Russia’s invasion has gone poorly, Chinese officials are likely to be more cautious about sending troops into Taiwan, said Liang-chih Evans Chen at the Institute for National Defense and Security Research in Taiwan.

That would be a relief for Taiwan, an island of almost 24 million people with a strong liberal democracy — it is the only Asian government to legally allow same-sex marriages — and a modern economy.

Taiwan does not expect that it could outright defeat China’s powerful military, especially without direct help from the U.S. Taiwan’s aim, instead, is to make a war look so costly for China that it is deterred from invading.

The war in Ukraine has shown how this could play out. Ukrainian resistance has been fiercer than anyone expected — killing thousands of Russian troops, according to U.S. estimates. The same could prove true in Taiwan, where polls find that nearly three-quarters of the population is willing to fight a Chinese invasion.

The West’s sweeping sanctions on Russia also suggest that an invasion of Taiwan could result in economic pain for China. Along with the weapons shipped to Ukraine, the sanctions show Western countries’ willingness to support democracies that are under attack.

The West’s resolve could go even further in Taiwan, with the possibility of U.S. forces directly intervening against an invasion. Biden has said American troops will not fight in Ukraine, but the U.S. keeps a deliberately vague line on Taiwan.

China has strengths that Russia does not. Its economy is far bigger and more diversified, cushioning the damage that sanctions could inflict. The countries that would stand to impose sanctions on China, from the U.S. to European nations to Japan, are generally more reliant on trade with China than they are on trade with Russia.

Unlike Ukraine, Taiwan is not recognized globally as an independent country — not even by the U.S. — potentially leading to questions about whether China’s attack would be an invasion at all.

China also has an enormous military advantage, with about a million active-duty ground troops, compared with Taiwan’s 88,000. (Although, unlike Russia, China would have to cross 100 miles of water to invade — a difficult, complex undertaking.)

The reaction to Russia’s invasion has also exposed some limits in how far the West is willing to go, with countries declining to send troops to defend Ukraine. And the U.S.’s ambiguity on Taiwan leaves room for American forces to stay out of combat.

Most important, China has time: Any invasion of Taiwan could be years away, if it happens at all, experts said. That gives China time to build up its military, insulate its economy from possible sanctions, study what Russia got wrong in Ukraine and see whether Western resolve actually holds.

The return of great power politics, then, could hinge on the outcome of the war in Ukraine — and whether it was ultimately worth it from Russia’s perspective.

State of the War

Yes, says Steve Calandrillo: More light in the evenings would reduce traffic accidents, crime and energy usage. Beth Ann Malow thinks permanent standard time, with light in the mornings, would be better for our health. And Josh Barro defends the status quo as a compromise that minimizes wasted daylight.

Mixed emotion: “The Shame Machine” is the most recent book to explore a feeling that can be exhilarating or terrifying.