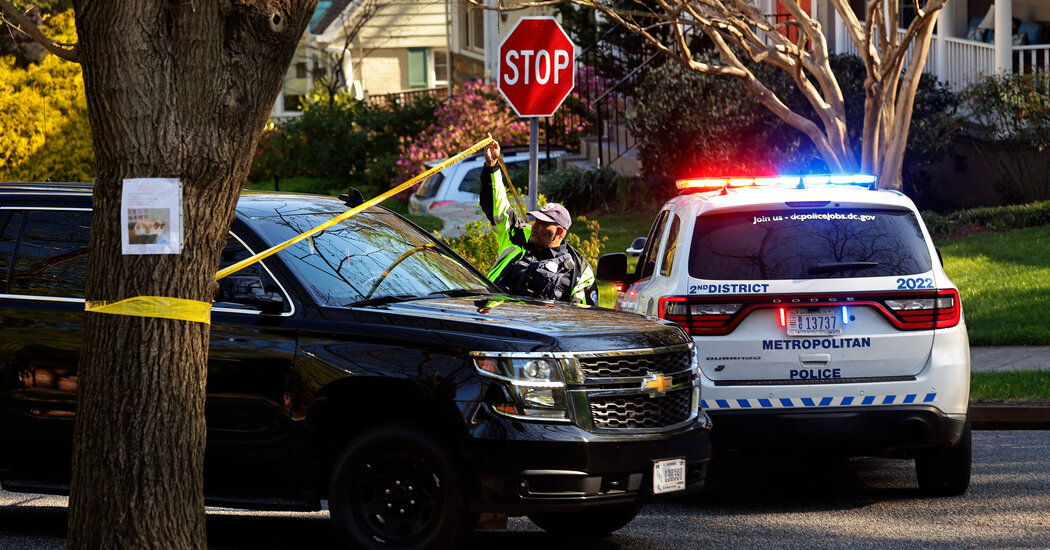 Secret Service officers fatally shot an intruder on Wednesday morning at a mansion in Northwest Washington that has long served as the Peruvian ambassador’s residence, officials said.

Robert J. Contee III, the chief of the Metropolitan Police Department, said a man in his 20s or 30s smashed several windows in the back of the residence, in the 3000 block of Garrison Street Northwest, adding that it was unclear if he had entered the home. After officers were called to the residence shortly before 8 a.m., they unsuccessfully fired their stun guns at the man, who was holding a metal stake in the backyard, Chief Contee said.

Two officers then fired their guns, Chief Contee said. The man was pronounced dead at the scene.

The two officers were taken to a hospital for evaluation, Chief Contee said. He did not know the extent of their injuries but said they were not life-threatening.

Oswaldo de Rivero, Peru’s ambassador to the United States, said in an interview later on Wednesday that he and his wife, Vivian, were at the residence with members of the embassy’s staff when the intruder started smashing windows with a metal pole.

The Secret Service, which protects foreign diplomatic missions in the Washington area, arrived within minutes, he said.

Peru has been roiled in recent weeks by violent protests over rising fuel, fertilizer and food prices, but it was unclear if there was any connection to Wednesday’s intrusion.

Mr. de Rivero said he did not know who the man was, and did not believe the attack on the residence was politically motivated.

“He was young — it’s so sad to see him killed like that,” Mr. de Rivero said. “But the Secret Service did what they had to do.”

Peru purchased the home as the embassy’s residence in 1944, according to Diplomatic Connections. In 2019, WTTG-TV described the residence, which was built in 1928, as “a massive home that sits on D.C.’s largest private property,” totaling 25 acres. It contained “room after room of Peruvian treasures,” with ancient art and sculptures dating back 1,500 years, the Fox affiliate reported.