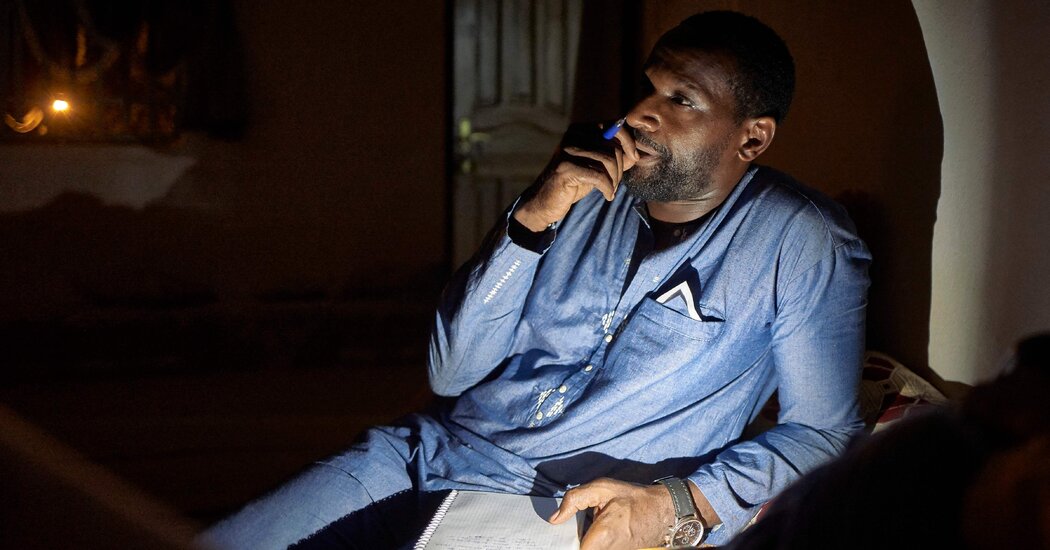 PARIS — A French journalist who went lacking in Mali final month mentioned in a video that circulated Wednesday on social media, however that would not be independently verified, that he had been kidnapped by a jihadist group working in the area as he appealed for assist from the authorities in France.

The 21-second clip seems to point out Olivier Dubois, a French journalist based mostly in Mali who disappeared there in early April, sitting cross-legged in what appears to be a tent.

After figuring out himself, Mr. Dubois says in the video that he was kidnapped on April 8 in Gao, a city in central Mali, by a neighborhood Islamist group affiliated with Al Qaeda that is called JSIM, an acronym for Group to Support Islam and Muslims.

“I am speaking to my family, to my friends and to the French authorities so that they do everything that is in their power to free me,” Mr. Dubois says in the video.

The French authorities confirmed that Mr. Dubois had gone lacking however stopped wanting describing it as a kidnapping, and the precise circumstances of his disappearance remained unclear.

“We are in contact with his family and with Malian authorities,” the French overseas ministry mentioned in a press release, including that it was finishing up “technical verifications” to authenticate the video.

Reporters Without Borders, the journalism advocacy group, mentioned on Wednesday that it had been knowledgeable of Mr. Dubois’ disappearance two days after he went lacking, “when he failed to return on time to the Malian capital Bamako.”

“In coordination with his editors, Reporters Without Borders took the decision not to report his abduction in order not to hamper the possibility of a rapid positive outcome,” the group mentioned in a statement.

But the discharge of the video appeared to drive the group and the French authorities to concern their first public feedback on Mr. Dubois’ disappearance.

Mr. Dubois, 46, who has lived and labored in Mali since 2015, was described by Reporters Without Borders and by French shops he labored with as a seasoned, veteran journalist who was nicely conscious of the dangers that got here with reporting in some areas of Mali.

Libération, one of many essential newspapers Mr. Dubois wrote for, said in an article on Wednesday that in late March he had pitched the newspaper a face-to-face interview with a JSIM midlevel lieutenant in Gao, Abdallah Ag Albakaye.

“Olivier has solid contacts in the jihadist sphere, he has known some of them for years,” Libération wrote. “They were vouching for his safety.”

Libération turned down the pitch due to the dangers concerned, the newspaper wrote. Still, Mr. Dubois flew from Bamako to Gao. There, he spent a number of hours at his resort and left for lunch. But two days later, he didn’t present up for his return flight to Bamako and was reported lacking by the French Embassy in Mali, Libération mentioned.

“The report of this reporter’s abduction is another cruel blow to journalism in the Sahel,” Arnaud Froger, the top of Reporters Without Borders’ Africa desk, mentioned in a press release, referring to the sub-Saharan area that stretches from Senegal to Sudan.

Armed teams working in Mali and different nations in the Sahel have made it more and more troublesome for journalists to report from the area. Last month, two Spanish journalists making a documentary about anti-poaching efforts and an Irish ranger were kidnapped and killed in Burkina Faso.

Central and northern Mali have change into particularly harmful since 2013, when France despatched its forces into the West African nation, a former French colony, after armed Islamists took management of its northern cities.

Since then, French and Malian forces have struggled to stop a range of extremist groups, a few of them affiliated with Al Qaeda or the Islamic State, which have unfold violence throughout the border space of Burkina Faso, Mali and Niger and elsewhere in the area.

In 2013, two French journalists working for Radio France Internationale, Ghislaine Dupont and Claude Verlon, had been killed by Islamist insurgents in Mali, in circumstances that have remained murky to this day.

Mali has undergone extreme institutional instability over the previous 12 months. After months of ballooning protests over corruption, bloodshed, and election interference, a coup in August toppled the president, Ibrahim Boubacar Keïta, and replaced him with Bah N’Daou, a retired colonel and former protection minister.