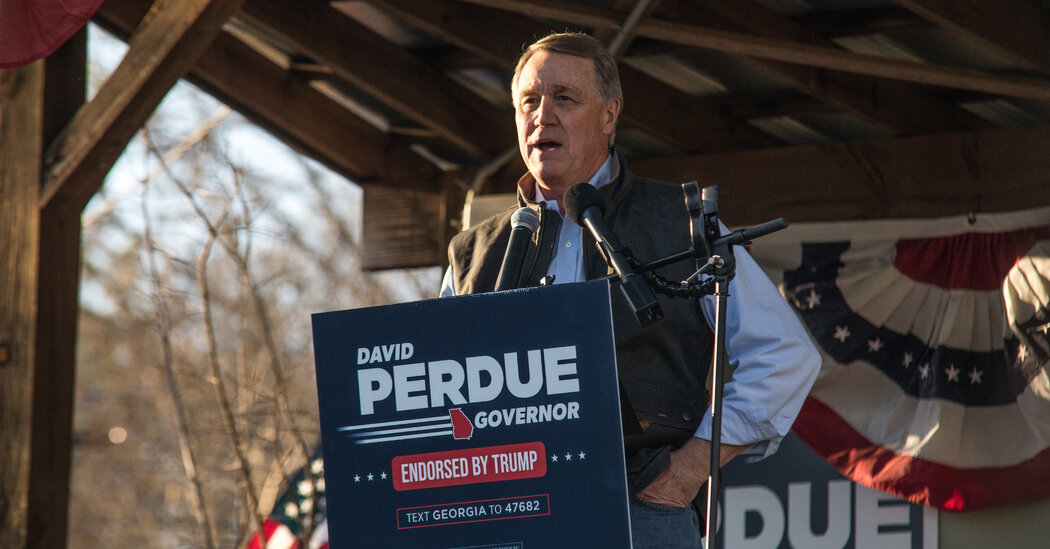 Mr. Trump will try to reboot Mr. Perdue’s effort at a Saturday rally in Commerce, a small city 70 miles northeast of Atlanta. They are expected to be joined by the six other Georgia candidates Mr. Trump has endorsed in the state, part of his campaign to play kingmaker in this year’s election. The group includes Herschel Walker, a former Heisman Trophy winner running for Senate; U.S. Representative Jody Hice, a candidate for secretary of state; Vernon Jones, a former Democrat now running for Congress; and John Gordon, a conservative lawyer who helped Mr. Trump defend his false election claims in court. Mr. Trump this week endorsed Mr. Gordon’s bid for state attorney general.

Mr. Kemp has had years to guard himself against a challenge from the party’s Trump wing. He was one of the first governors to roll back Covid-19 restrictions in early 2020, drawing the support of many on the right who were angry about government-imposed lockdowns. Last year, he signed into law new voting restrictions that were popular with the Republican base. And in January, the governor backed a law allowing people to carry a firearm without a permit and another banning mailed abortion pills.

That record, Kemp supporters argue, won over Republican base voters, even those who agree with Mr. Trump that Mr. Kemp did not do enough to fight the election results in Georgia.

“I think they’ve turned the page on the election,” said State Senator Clint Dixon, a Republican representing the Atlanta suburbs. “And folks that may have been upset about that, still, they see that Governor Kemp is a proven conservative leader that we need.”

Of Mr. Trump’s rally, he added: “I don’t think it does much. And the polls are showing it.”

Mr. Kemp has amassed a war chest of more than $12.7 million, compared with the $1.1 million Mr. Perdue has raised since entering the race in December. The Republican Governors Association has also cut more than $1 million in ads supporting Mr. Kemp — the first time the organization has taken sides in a primary race. (Since December, Ms. Abrams has been raising more than both men, bringing in $9.3 million by January.)

Mr. Kemp has worked to line up key Republican leaders — or keep them on the sidelines. Earlier this month, he appointed Sonny Perdue chancellor of the state’s university system. The former governor intends to remain neutral in the primary, according to people familiar with his plans.