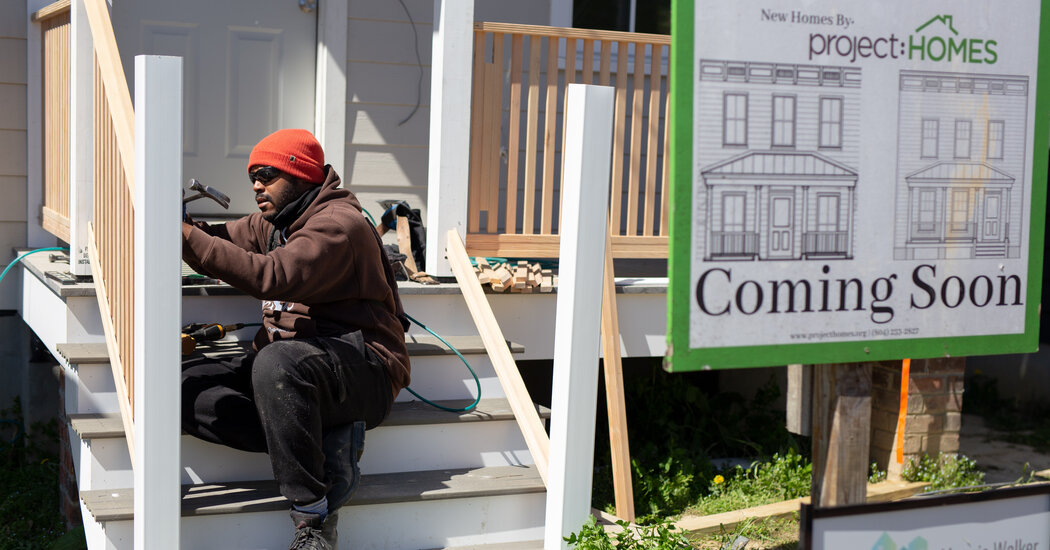 RICHMOND, Va. — As Chris Frelke surveyed the Thomas B. Smith Community Center, he conceded that the beige-and-green cinder block structure was not much to look at. But Mr. Frelke, the parks director in Virginia’s capital, spoke with excitement describing the image in his mind’s eye: One day, there would be a pristine new complex capable of providing services from child care to community college classes.

That dream complex is not some remote fantasy. The city of Richmond intends to build it in the next few years using $20 million from the American Rescue Plan, President Biden’s trillion-dollar coronavirus-relief law. Richmond will receive a total of $155 million, a cash infusion that its Democratic mayor, Levar Stoney, called “a once-in-a-lifetime sort of investment.”

“This is akin to our New Deal,” Mr. Stoney said.

Unlike the New Deal, however, this $1.9 trillion federal investment in American communities has barely registered with voters. Rather than a trophy for Mr. Biden and his party, the program has become a case study in how easily voters can overlook even a lavishly funded government initiative delivering benefits close to home.

Mr. Biden’s popularity has declined in polls over the past year, and voters are giving him less credit for the country’s economic recovery than his advisers had anticipated. In Virginia, Democrats got shellacked in the 2021 off-year elections amid the country’s halting emergence from the depths of the pandemic.

Ambivalence among voters stems partly from the fact that many of the projects being funded are, for now, invisible.

At Richmond’s Southside Community Center, slated to balloon in capacity with the help of rescue plan funding, Linda Scott, a 75-year-old pickleball enthusiast, said she had heard nothing of the coming upgrades.

“I know that we’re getting lots of money,” said Ms. Scott, a self-described independent who voted for Mr. Biden. “But what we’re doing with it, I’m not sure.”

Thirteen months after Mr. Biden signed the emergency package, that money is starting to fuel a wave of investment on city infrastructure, public services and pilot programs unlike any in decades.

City and county leaders are spending confidently, boasting of the generational improvements they are making with the help of Mr. Biden’s legislation.

Mr. Stoney allowed that it was not clear how much voters had processed that barrage of spending when the projects were far from completion. In cities like his, the money must make its way through city councils and contract-bidding processes; in some states, the path to deploying funds has been even longer as governors wrangle with conservative legislatures.

A Guide to the 2022 Midterm Elections

Other initiatives will kick in faster but affect fewer people: In Richmond, the mayor’s office has endorsed a grant of about $350,000 to Daily Planet Health Services, clinics for low-income residents, to expand capacity to care for people without homes.

Dr. Patricia Cook, the organization’s chief medical officer, said the money could be applied quickly: “We’d be able to fill the rooms that day.”

Getting voters excited about the American Rescue Plan is a tall order when so many are preoccupied with the price of gasoline and the cost and availability of other basic goods — concerns the emergency-spending bill was not designed to address.

A Gallup poll in March found that more Americans said they worried a great deal about inflation than any other issue. Crime and homelessness, both targets of rescue spending, were not far behind.

The American Rescue Plan, which also funded direct relief payments to voters and health programs like vaccine distribution, has been criticized by Republicans and some economists for pumping too much money into the economy and probably contributing to inflation.

Mr. Stoney said he had encouraged the White House to work with mayors and treat them as the “tip of the spear” in promoting its aid. Many Americans were still in a gloomy mood because of the pandemic, the mayor said, and Democrats had not done a very good job of communicating about the plan.

“Not just the president, but it’s difficult even for us sometimes to break through some of the noise that’s out there,” he said.

Once in a Lifetime

The political predicament confronting Mr. Biden and his party was embedded in the structure of the American Rescue Plan. Within the $1.9 trillion law, a $350 billion fund for state and local governments was designed to meet a dire set of circumstances along the lines of the Great Recession: a potentially catastrophic short-term budget shortfall followed by a slow economic recovery.

Mr. Biden declared it would help states and municipalities rehire all “those laid-off police officers, firefighters, teachers and nurses.”

The $350 billion in rescue funds would be handed out by 2022 in increments, with recipients given until 2026 to spend it. That timeline was meant to gird states and cities against another economic slowdown, said Gene Sperling, the presidential adviser overseeing the rescue plan.

Yet rather than limping through a recovery, the country enjoyed the fastest economic growth in nearly four decades and saw the unemployment rate plummet. Government revenues surged across much of the country, and governors of once-beleaguered states, like California and Minnesota, announced proposals to give residents tax cuts or one-time rebates.

Some state and local government payrolls are smaller than they were before the pandemic; many municipalities face a backlog in services from courts to coroners’ offices, and they are not immune to inflation and fuel shocks.

The rescue spending still represents something of an insurance policy against a new recession. But for state and local leaders, the money is clearly something more than that.

As government revenues began returning, the Treasury Department issued guidance encouraging cities and counties to treat rescue funding as a flexible resource that could be deployed for purposes faintly related to Covid-19.

If municipalities could make the case that a social problem worsened because of the pandemic, then they could probably use rescue plan funding.

Under the federal legislation, Mayor Wade Kapszukiewicz knows that Toledo, Ohio, is due $180 million over two years, a colossal sum for a city of about 270,000 people.

Mr. Kapszukiewicz is a rare Democrat who may have been helped politically by the funding. The mayor won re-election by a wide margin in November; in his victory speech, he cited the American Rescue Plan as a reason for his city to be optimistic.

“None of us in public life have ever had an opportunity like this,” Mr. Kapszukiewicz said.

Cities and counties cannot enact programs that would go bankrupt once the money expires. That has encouraged governments to use it on one-time investments that could be completed by the 2026 deadline — and underwrite policy experiments on a limited scale.

Mayor Michelle Wu of Boston, a progressive Democrat, has pledged to spend hundreds of millions on affordable housing initiatives. Ms. Wu, who campaigned on eliminating fares for mass transit, is using about $8 million of rescue plan money — from more than half a billion allotted to her city — to make three bus lines free for two years.

She hopes demonstrating the value of free transit will create momentum to enact the policy without federal money.

“Our goal is to resist the temptation to divvy up these funds into 10,000 photo ops,” Ms. Wu said, “and instead truly focus on transformational change.”

Ms. Wu said she had been up front with her constituents that the federal money made her transit policy possible, but she said many were not focused on its origins.

“I think if you talk to people out and about, living their lives in our neighborhoods, they don’t care where the funding comes from,” she said.

The potential of these programs is unproven, and in many cases years away — a challenge for Democrats who would like to run on a record of concrete accomplishments this fall.

“You tell them about the American Rescue Plan,” Mr. Biden said to House members, “and they say, ‘What the hell are you talking about?’”

‘It Just Does Not Connect’

A short drive from Richmond’s Thomas B. Smith Community Center is where the city of Richmond ends and Chesterfield County begins. A historically Republican suburb that is wealthier and whiter than Virginia’s capital city, Chesterfield County has already received more than $34 million through the American Rescue Plan. A second installment of that size is due later.

The Republican-led county board has announced a major upgrade of parks and other construction projects, including a school and police station.

The county’s finances remained sturdy throughout the pandemic and are now so robust that the board of supervisors approved a reduction in the real estate tax. The rescue plan funding allowed the county to accelerate some projects, local officials said, but they would likely have undertaken many of them without federal help.

Christopher Winslow, the Republican chair of the county board, said the projects would have a “long-lasting and significant effect on citizens.” But in a fiscally robust county like his, Mr. Winslow said, the funding was less a rescue than a “bonanza.”

By the time the first tranche of rescue money arrived, Mr. Winslow said, there was “a sense that the real pain was largely behind us.” That view is shared by many Republicans in Congress, who criticized the original price tag of the legislation and proposed clawing back some of the money.

During a recent meeting of the United States Conference of Mayors, several White House officials, including Mitch Landrieu, the former New Orleans mayor, urged city leaders to do more to promote the rescue money — or risk seeing Congress redirect some of the funding elsewhere.

After shedding its conservative roots to back Mr. Biden for president in 2020, Chesterfield County shifted back to the right to support a Republican, Glenn Youngkin, for governor.

Lashrecse Aird, a former Democratic state legislator who represented a slice of Chesterfield County, said the rescue plan was of “no value whatsoever” to Democrats in Virginia’s 2021 elections. Ms. Aird, who lost her seat in the House of Delegates in November, said voters were scarcely aware of the federal aid.

“It just does not connect. That is just the honest to goodness truth,” Ms. Aird said. “Even when you’re talking about schools, so much of this stuff is so far down the line before it’s anything you can see.”