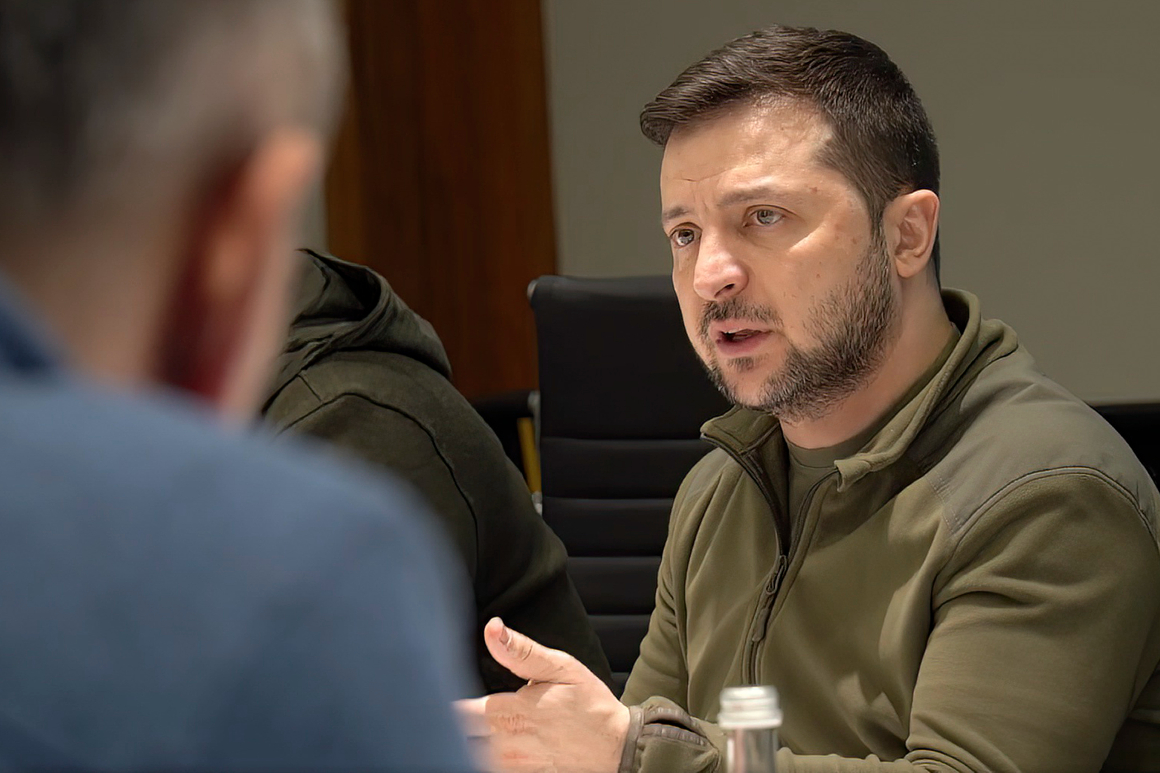 “He shoots from the hip, and that’s part of his charm,” said Sen. Chris Murphy (D-Conn.), who along with Sen. Rob Portman (R-Ohio) has had more direct face time with Zelenskyy than any American official. “I think it has sometimes gotten him into some political hot water, but the upside of his style is ten-fold more advantageous than the occasional downsides.”

The results haven’t been perfect, though, and there are limits to Zelenskyy’s strategy; most of his outstanding requests, like the establishment of a no-fly zone, have been ruled out by members of both parties. Some lawmakers have even mused about Zelenskyy’s personal style undermining his own goals. But that hasn’t stopped him from appealing to Americans’ emotions on the brutality of Russia’s war, even on demands he knows can never be met.

“When I first met him, I thought I was going to be meeting a comic. And instead I met a statesman,” said Portman, who has met several times with Zelenskyy face-to-face. “Some people underestimated his political abilities from the start. I have not. … He’s become one of those rare figures who can actually direct the course of history.”

Zelenskyy’s evolution from entertainer, to NATO hopeful seeking an audience with former President Donald Trump, to an anti-Russia icon shows that his anything-but-buttoned-up energy can pay off on Capitol Hill. He’s said to be eager to address lawmakers on Wednesday morning — an engagement that came about at Zelenskyy’s personal request, according to a congressional official.

First elected in 2019 on a vow to stamp out corruption and integrate Ukraine with Europe, the 44-year-old assumed office at a fraught moment. His nation’s military was advancing thanks to training and support from the U.S. and other major allies, but Russian-backed separatists in his east were trying to make Russian President Vladimir Putin’s dreams of taking Ukraine a reality.

Zelenskyy came into power with a strong mandate, having won a supermajority with no prior political experience. Just a few months into his tenure, he was dragged into U.S. politics after Trump pressed him during a now-infamous phone call to investigate both then-candidate Joe Biden and his son, Hunter Biden.

Trump held back crucial military aid from Zelenskyy at the same time, setting his first impeachment in motion as Democrats accused him of seeking to extort a foreign leader. After the Senate acquitted Trump, Murphy led a bipartisan trip to Kyiv to meet with Zelenskyy and reassert U.S. support for a besieged European ally.

Now that Russia is attacking, Murphy said this week, “it would be negligent of him to not ask for everything. His people are dying. … We’ve got to come to our own conclusions about what we’re willing to do and what we can’t do.”

Other lawmakers who have spent time with Zelenskyy as he has weathered American political storms described him as unscripted and candid — sometimes to his own detriment with officials more used to careful diplomatic wordsmithing. Those members of Congress who know Zelenskyy best said his efforts to shame Western nations into sending additional assistance to his country have not surprised them, given his track record.

Sen. Jeanne Shaheen (D-N.H.) said the Ukrainian president has always been crystal clear about the kind of support he needs. Zelenskyy’s leadership and resolve in the face of Russia’s aggression “is fundamental to keeping the Ukrainian military and people’s spirit strong in the face of such devastation,” Shaheen added.

The standard practice for foreign leaders dealing with U.S. officials and lawmakers requires caution and choreography that Zelenskyy and his top aide, Andriy Yermak, have often eschewed in intimate settings.

Their posture has sometimes forced Biden administration officials to question whether Zelenskyy is serious about his urgent pleas for additional military assistance, including MiG fighter jets from Poland that the U.S. is thus far unwilling to transfer out of concerns about escalation with Russia.

As a result, Biden administration officials often consult with those lawmakers who have met frequently with Zelenskyy to get their read on his intentions.

But other lawmakers have scratched their heads at the Ukrainian president’s handling of Washington in recent weeks, among them congressional Democrats who became especially frustrated with Zelenskyy’s full-throated endorsement of Sen. Ted Cruz’s (R-Texas) legislation to sanction the Nord Stream 2 gas pipeline. The Russia-to-Germany project was taken offline after Russia’s invasion, but Zelenskyy wanted the pipeline shut down sooner. And he endorsed the GOP-led legislation even though the Biden administration wasn’t yet prepared to impose those sanctions.

Some Democrats saw Zelenskyy’s support of the Cruz bill as inadvertently undermining the White House’s efforts at trans-Atlantic unity against Russia’s aggression.

Republicans, meanwhile, view Zelenskyy as the impetus for the Biden administration’s reversals on several sanctions against Russia that had initially met White House resistance. Through his private Zoom meetings with lawmakers and his dramatic public pleas, Zelenskyy got Capitol Hill on board for additional military assistance and a ban on Russian oil imports within days — unheard-of speed for Congress.

“He’s clearly grown dramatically into his presidency. He’s truly proven himself to be a world leader of great courage and conviction,” said Sen. John Barrasso (R-Wyo.), who has met with Zelenskyy twice, including an hourlong sit-down in his office in Kyiv last September.

“It does seem to me that the administration has to be dragged along and pushed to do the right thing,” Barrasso added. “Zelenskyy’s courageous leadership is making a significant difference.”

In his public remarks, Zelenskyy has sought to strike a delicate balance between expressing gratitude for the assistance Western nations have already provided and pleading for even more. That has often put him at risk of seeming ungrateful to the U.S. and other NATO allies, which have provided his nation with essential military, humanitarian and economic assistance.

That posture was on full display on Tuesday when he addressed the Canadian Parliament. He doubled down on his push for a no-fly zone, detailing the devastation that Russian forces have caused in his country.

“How many bombs have to fall on our cities before you make this happen?” Zelenskyy said. “You all need to do more to stop Russia, to protect Ukraine, and by doing that, to protect Europe from Russian threats.”

While Zelenskyy has united both parties, that hasn’t stopped fringe voices from seeking a political upper hand. Freshman Rep. Madison Cawthorn (R-N.C.) recently called Zelenskyy a “thug” and a liar who’s seeking to drag the U.S. into his war, a message other Republicans have resoundingly rejected.

“People are inspired by him and by the heroism,” Senate Minority Leader Mitch McConnell said in a recent interview. “We need to help them quickly and efficiently.”