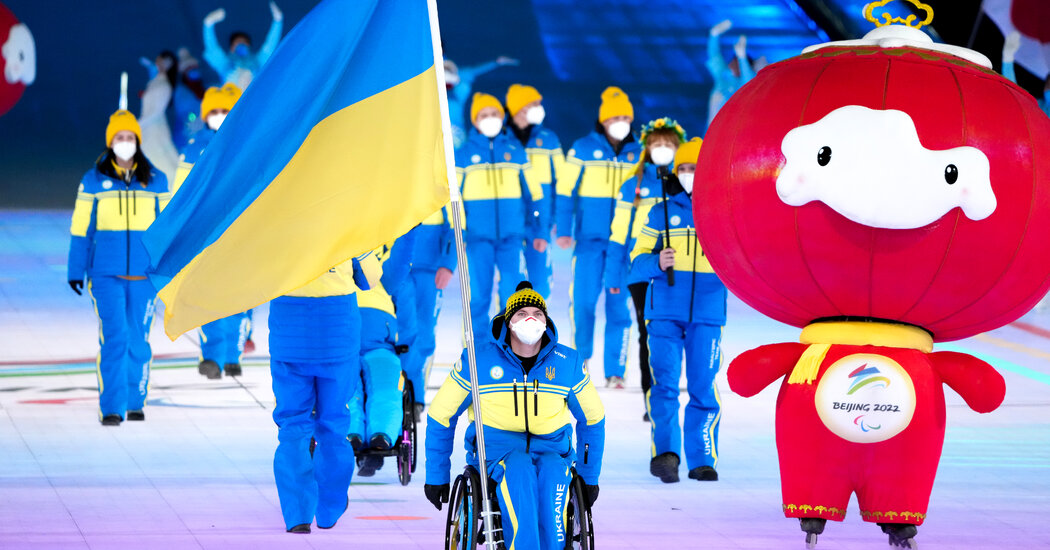 BEIJING — With heavy hearts and unimaginable worry, athletes from the Ukrainian national Paralympic team arrived in China two weeks ago, seeking to win medals and draw attention to the plight of their country through their athletic achievement.

Isolated from loved ones, many of whom were sheltering in basements and garages under bombardment from Russian weaponry, Ukraine’s athletes became a central theme at a quadrennial event based in part on their perseverance.

Ukraine won 28 medals, including 10 gold, through the first eight days of the event (the second-most of any nation), and their courage and determination in the face of daunting emotional and physical circumstances earned widespread sympathy and respect.

“We can’t even imagine what they are going through,” said Jake Adicoff, an American cross country skier, who was one of the few to win gold while competing against Ukrainian skiers. “We all support them.”

Even before the Games opened, Ukraine was the focus of the event as the International Paralympic Committee banned all Russian athletes over their government’s invasion of Ukraine. The Belarusian delegation was also banned for that nation’s support of the invasion.

At a news conference the next day, Valerii Sushkevych, the president of Ukraine’s Paralympic delegation, thanked the I.P.C. and informed the world that Ukraine’s athletes would remain in China to serve their country by competing at the Games, as difficult as it may have been.

“Our soldiers have battles in Ukraine,” he said. “We, the Paralympic team, have our battles in Beijing.” He added that if the team chose not to come to Beijing to compete, it would be like “capitulation.”

Ukraine has a proud history of success at the Paralympics, especially at the Winter Games, where it dominated the only two sports it entered — biathlon and cross-country skiing.

By day, athletes raced and trained. By night, they spent time on their phones, connecting with loved ones under attack in Ukraine. Most of the athletes said they could not sleep from the worry and fear, and when they showed up to race, the mental strain was visible on their faces, and in their subdued demeanor.

Still, on the first day of competition, Ukrainians set the tone by winning three gold medals in biathlon and seven medals in total, including a sweep of the men’s vision-impaired sprint. They barely celebrated.

Medal ceremonies became both somber and uplifting moments, as athletes and observers alike were overcome by emotion and admiration. It was difficult to imagine what the skiers, like the silver-medalist Oksana Shyshkova, were thinking as they received their medals underneath Ukraine’s blue and yellow flag, or how they managed to focus on racing.

“All of us have families back there,” Shyshkova said. “We just don’t know what to do. We’re really scared.”

Some coped with the trying circumstances by concentrating on achievement, like Vitalii Lukianenko, who is from Kharkiv, a city under recent attack. As he prepared to compete, his family sought shelter underground and he went days without sleeping from worry, according to Sushkevych, the president of the delegation.

Sushkevych said Lukianenko was so physically and emotionally worn down that Sushkevych did not think he should compete.

Iran nuclear deal. A European Union official said that talks on reviving the 2015 deal were put on pause following the invasion. Russia, a signatory to the accord, has tried to use final approval of the deal as leverage to soften sanctions imposed because of the war.

But Lukianenko took the starting line vowing not to feel any pain, and he won gold.

“If you know the situation,” Sushkevych said, “this was a miracle.”

For others, the fear and sleepless nights took a toll on the snowy racecourses, and their times were slower than normal. Juliia Batenkova-Bauman, whose husband and daughter were still in Kyiv, spoke to numerous reporters from various countries, telling her story over and over through tears, in the hope that it might generate international support for Ukraine. She spoke of nightmares and said the constant worry was “killing” her.

“I can’t show my best results here because I can’t sleep at night,” she said. “I always think about my family.”

In the second week, as Ukrainian athletes continued to pile up medals, they held an unusual vigil for peace in the athletes’ village and held up a banner calling for peace.

Two days before that, Anastasiia Laletina was forced to withdraw from her biathlon event. Ukraine’s Paralympic committee announced that the 19-year-old’s father, a soldier in the Ukrainian army, had been captured by Russian troops.

But on Friday, she returned to competition, with the support of her teammates.

“We are emotionally and physically exhausted because of this situation,” said Shyshkova, who won two gold medals and a silver. “But we’re here to represent our country, to glorify our country, to tell the world that Ukraine exists, and we exist.”