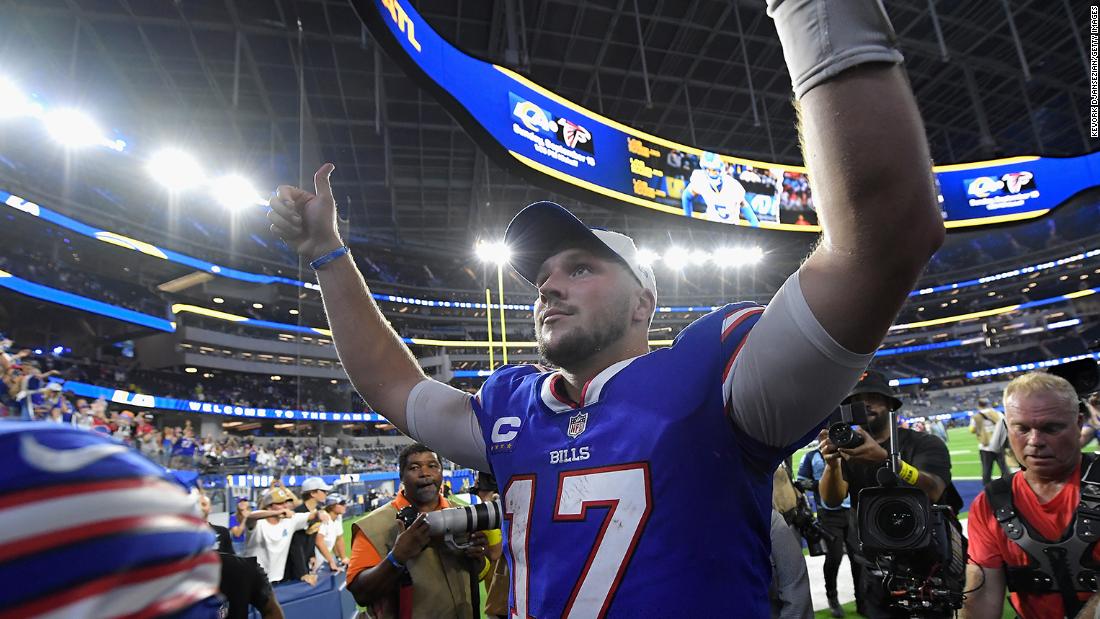 And unlike any season that this writer can recall, the Bills are — by many estimates — one of the favorites to win it all. Last night’s performance was so dominant that Buffalo may have increased its odds of bringing home the Super Bowl by over 50%.

Still, we should be clear what “favored” means at this early stage in the season: bringing home the Vince Lombardi Trophy at the end of the year is not too likely — much to my chagrin. But even if the Bills don’t ultimately take home the ultimate prize, it’s evident that they’re picking up fans thanks to their newfound success.

Before the game against the Rams, the Bills had a lot of close company in who was most likely to win the Super Bowl. The Tampa Bay Buccaneers, Green Bay Packers, Kansas City Chiefs and Rams rounded out the top with between a 7% and 9% chance each.

The combined chance of the teams with the second and third best chance of winning it all was nearly twice (18%) the Bills’ chance entering the season. The morning after their blowout victory, the Bills’ odds of winning is nearly equal to the next two closest teams.

Put another way, the Bills were the weakest favorite before the season of any FiveThirtyEight favorite since they started making predictions in 2015. Now, the Bills are stronger favorites than any preseason favorite — except the 2017 New England Patriots, who ended up losing the Super Bowl to the Philadelphia Eagles, 41-33.
All that said, 16% is only 16%. There’s an 84% chance any team other than the Bills take home the Lombardi Trophy — the betting lines coming from Las Vegas agree with the Bills’ chances.

Based on these statistics, it would be far more surprising if the Bills won the Super Bowl than if they didn’t. The Bills have about the same chance of rolling a 6 when tossing a six-sided die. It can happen — we’ve all seen it — but it isn’t likely.

My pessimism here for the Bills’ chances may come as a surprise given that those who know me know that I’m a Bills fan. It could be that I just cannot believe that they will win. Maybe, it’s that I’ve been hurt too many times.

After all, this is a Bills team that lost after having kicked off with 13 seconds left and had a lead in last year’s AFC Divisional Game against the Chiefs. That was only the second time that a team kicked off with a lead with 20 seconds or less on the clock and lost a playoff game in the over 300 games since 1994. The other team? The 1999-2000 Buffalo Bills, who allowed the so-called Music City Miracle.

Then again, things are different than they have been in the past for the Bills. Perhaps, they are as good as they have ever been in their entire franchise history.

Regardless of whether they win or lose this year, there are going to be a lot more fans along for the ride. A look at Google searches during the month of August reveals that the Bills were the 12th most searched team in the country.

They pulled in a little less than half the search of interest of the leading team: the Dallas Cowboys. The Bills were the most searched team only in their home state of New York.
This placing may not seem like a good result for the Bills. Remember though that Buffalo is the smallest media market for any NFL franchise (while Green Bay is smaller, you count Milwaukee as part of the Packers’ home market). The Bills don’t start out with a large natural base like the so-called “America’s Team.”
Moreover, the Bills have been making progress compared to where they were five years ago before the 2017 season. The Bills hadn’t been to the playoffs since the 1999/00 season at that point. The old joke I used to make — which just happened to be true at the time — is that the Bills hadn’t been to the playoffs since before my bar mitzvah.

Back then, the Bills ranked 23rd out of 32 teams for Google searches and had less than one-fifth as many searches as the Cowboys.

The movement the Bills have made is a sign that winning does bring you more fan attention; we see that with other teams too. The Chiefs, who have made it to at least the conference championship the last four seasons, had the biggest movement. Likewise, the 49ers went from one of the worst teams to one of the best and have seen a big upswing in search interest.
We see this in other metrics too. During the 2017 season, the Bills had just one regular season game that was seen by all or most of the country. This season, at least seven Bills games will be seen by all or most of the country. You don’t put a team on national television if you don’t think people will be interested in watching.

Perhaps, the big question is what happens if the Bills do make it all the way this year?

Maybe — just maybe — the team from the smallest media market in the US will become the new America’s team … and I can live with that.