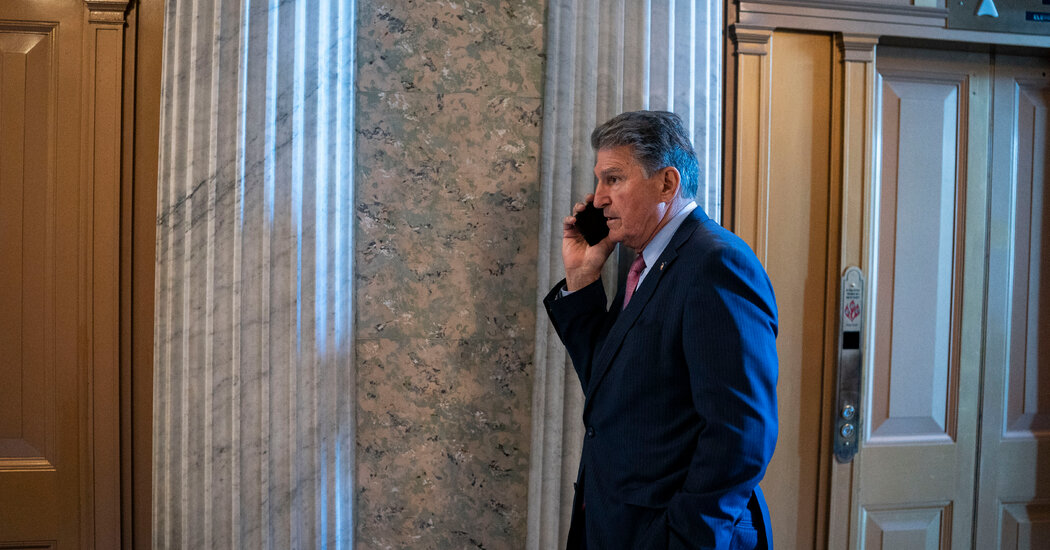 WASHINGTON — First, he killed a plan that would have forced power plants to clean up their climate-warming pollution. Then, he shattered an effort to help consumers pay for electric vehicles. And, finally, he said he could not support government incentives for solar and wind companies or any of the other provisions that the rest of his party and his president say are vital to ensure a livable planet.

Senator Joe Manchin III of West Virginia, who took more campaign cash from the oil and gas industry than any other senator, and who became a millionaire from his family coal business, independently blew up the Democratic Party’s legislative plans to fight climate change. The swing Democratic vote in an evenly divided Senate, Mr. Manchin led his party through months of tortured negotiations that collapsed on Thursday night, a yearlong wild goose chase that produced nothing as the Earth warms to dangerous levels.

“It seems odd that Manchin would choose as his legacy to be the one man who single-handedly doomed humanity,” said John Podesta, a former senior counselor to President Barack Obama and founder of the Center for American Progress, a left-leaning think tank.

Privately, Senate Democratic staff members seethed and sobbed on Thursday night, after more than a year of working nights and weekends to scale back, water down, trim and tailor the climate legislation to Mr. Manchin’s exact specifications, only to have it rejected inches from the finish line.

Mr. Manchin’s refusal to support the climate legislation, along with steadfast Republican opposition, effectively dooms the chances that Congress will pass any new law to tackle global warming for the foreseeable future — at a moment when scientists say the planet is nearly out of time to prevent average global temperatures from rising 1.5 degrees Celsius above preindustrial levels.

That is the threshold beyond which the likelihood of catastrophic droughts, floods, fires and heat waves increases significantly. The planet has already warmed an average of about 1.1 degrees Celsius.

President Biden has pledged to the rest of the world that the United States, the country that has historically pumped the most greenhouse gases into the atmosphere, would cut its emissions in half by 2030. Without legislation, it will be impossible to meet Mr. Biden’s climate goals.

As the overall auto market stagnates, the popularity of battery-powered cars is soaring worldwide.

“We are not going to meet our targets, period,” said Leah Stokes, a professor of environmental policy at the University of Santa Barbara, California, who has advised congressional Democrats on climate legislation.

“I honestly don’t know how he is going to look his own grandchildren in the eyes,” she said of Mr. Manchin.

At the start of this week, Mr. Manchin said his top concern was the price at the pump and the need for more fossil fuels. “How do we bring down the price of gasoline?” he said. “From the energy thing, but you can’t do it unless you produce more. If there’s people that don’t want to produce more fossil, then you got a problem. That’s just reality. You got to do it.”

On Wednesday, after data was released showing the nation’s inflation rate at 9.1 percent, the highest in a year, Mr. Manchin said in a statement, “No matter what spending aspirations some in Congress may have, it is clear to anyone who visits a grocery store or a gas station that we cannot add any more fuel to this inflation fire.”

Sam Runyon, a spokeswoman for Mr. Manchin, declined to discuss his position on Thursday night, adding that the senator “has not walked away from the table.” But people involved in the talks said they believed they had reached the end of the line.

White House officials did not respond to several calls on Thursday night.

For a year and half, climate activists have described themselves as Charlie Brown to Mr. Manchin’s Lucy. Several times they neared what many Democrats believed could be a deal, only to see Mr. Manchin yank away his support at the final moment.

But perhaps they should have seen it coming.

Mr. Manchin once ran a campaign advertisement in which he shot a bullet hole through Mr. Obama’s climate plan. So when Mr. Biden took office, vowing to enact the most ambitious climate change plan in the nation’s history, he knew Mr. Manchin would be his biggest obstacle.

Mr. Wyden was charged with writing the core of the climate legislation — about $300 billion in tax credits for producers and consumers of wind and solar power and buyers of electric vehicles. It would be the single largest expenditure by the United States to fight climate change.

Mr. Wyden sought Mr. Manchin’s input to shape the tax package in such a way that the West Virginian would support it. Mr. Manchin obliged: He told Mr. Wyden to rewrite the package according to his specifications, so that the tax credits could also be used for nuclear energy and for carbon capture and sequestration, a nascent technology that has so far not proved commercially viable but that could theoretically allow power plants that burn coal, oil or gas to continue to operate without climate-warming emissions.

The changes were less than climate-friendly, but Mr. Wyden agreed to them, saying he believed it would help secure Mr. Manchin’s support.

At the same time, other Democrats were crafting an even more ambitious climate provision for the bill, known as a clean energy standard, that would have paid electric utilities to replace coal- and gas-fired power plants and penalized those that didn’t. In a private memo signed last summer with Senator Chuck Schumer of New York, the majority leader, Mr. Manchin, the chairman of the Senate energy and natural resources committee, secured control over the design of the program.

Then in December, Mr. Manchin pulled out of negotiations altogether, saying he could not vote for the overall spending package. Talks were dead for months.

Mr. Manchin and other Democrats left open the possibility of a future deal based on the $300 billion in tax credits for renewable energy and electric vehicles. But Mr. Manchin also insisted that spending be cut and that fossil fuels — coal, gas and oil — be included. Those demands grew more vociferous as winter turned to spring and Russia’s war against Ukraine rocked energy markets and gas prices soared.

“Russia’s invasion of Ukraine gave Manchin a huge new bargaining authority, as did record inflation,” said Paul Bledsoe, a strategic adviser at the Progressive Policy Institute. That, he said, “changed the dynamic.”

Over the past weeks, Democrats thought they were finally nearing an agreement on the climate package with Mr. Manchin. But he still had demands: He wanted to eliminate billions of dollars in electric vehicle tax credits. He wanted to rework the clean energy tax package that he had fashioned with Mr. Wyden, gutting a plan to give developers of clean energy direct payments upfront instead of tax credits they could recoup after their investment.

Mr. Schumer conceded to every request and more, staffers said. Up until Thursday evening, the majority leader thought a deal was possible, according to climate activists who spoke with Mr. Schumer later that night.

The White House made concessions to Mr. Manchin, as well.

This month, the Interior Department offered the possibility of 11 new offshore oil and gas lease sales in the Gulf of Mexico and Alaska — despite Mr. Biden’s campaign promise to end new drilling in federal waters — which two administration officials described as an effort to appease Mr. Manchin. The White House also was weighing whether to allow a path for other fossil fuel projects, like a gas pipeline in West Virginia, in order to gain Mr. Manchin’s vote.

The administration delayed federal rules to address methane, mercury and other pollutants from oil and gas facilities so as not to anger Mr. Manchin during delicate negotiations, according to several administration officials. That’s two years lost time in a regulatory process that can be lengthy.

“He has pretended to be a fair arbiter,” Jamal Raad, executive director of the climate advocacy group Evergreen Action, said of Mr. Manchin. “He talked about his grandchildren. It turns out that’s all bullshit. He cares about profits for his coal company and his own political future over the future of our planet.”

Ms. Runyon did not respond to Mr. Raad’s comments.

The collapse of negotiations with Mr. Manchin comes two weeks after the conservative majority on the U.S. Supreme Court limited the Environmental Protection Agency’s ability to regulate carbon emissions from power plants. The decision left intact the E.P.A.’s authority to regulate greenhouse gas emissions but blocked any attempt by the agency to write regulations so broad that they force the closure of coal-fired plants, which generate the most carbon dioxide, or compel utilities to switch to wind, solar and other clean sources from fossil fuels.

The court ruling, combined with the blockage in Congress, still leaves the administration with a few avenues to cut climate-warming pollution, although they will not be enough to meet Mr. Biden’s targets.

The E.P.A. still plans to issue tougher regulations to control methane, a potent greenhouse gas that leaks from oil and gas wells. And it plans stricter limits on other types of pollution generated by power plants, such as mercury, smog and soot. The idea is that cracking down on those pollutants could force electric utilities to clean up or shut down the dirtiest facilities, such as coal-burning power plants.

And the administration intends to tighten limits on emissions from vehicle tailpipes, although many of the same litigants who were successful in the power plant case in the Supreme Court are expected to challenge tougher tailpipe standards, too.

“We can’t throw in the towel on the planet, so it’s more important than ever that Biden use all his authority to fiercely fight for the future,” Mr. Podesta said.

Congress could still pass legislation to extend tax breaks for wind and solar energy and electric vehicles, but that would most likely require Republican support.

Stalled action on the federal level puts a spotlight on dozens of states that are moving ahead with their own climate plans. Leading them is California, which is requiring that by 2045, 100 percent of its electricity be generated from sources that do not produce carbon dioxide.

Twenty-one other states have some version of that clean electricity standard, and several are advancing legislation for even more stringent versions. California is also expected to finalize a first-in-the-nation regulation requiring that all new cars sold in the state must be electric or zero-emission by 2035. Seventeen other states are in line to adopt the same rule.