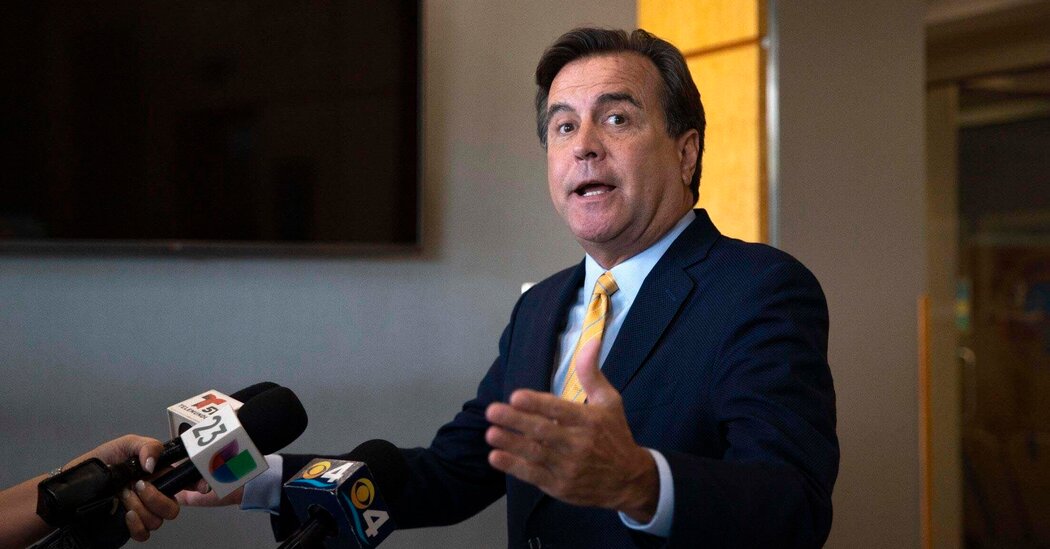 CORAL GABLES, Fla. — Every so often, a petty political episode consumes Miami, its piquant details transfixing the city for days. Like the one that began this week at Morton’s Steakhouse during a late lunch, when a lobbyist happened upon a city commissioner.

Depending on who’s telling the story, the lobbyist, Carlos J. Gimenez, whose father is a local congressman, either slapped (according to the police) or flicked his wrist (according to the commissioner) at the back of the head of Commissioner Alex Díaz de la Portilla of Miami, after greeting him with a sexual epithet and a query: “Do you remember me?”

A detective from the Miami Police Department’s special investigations section, who was providing security to the commissioner, at that point approached Mr. Gimenez.

What happened next is not entirely clear, and remains the subject of intense debate in political circles all over town. It ended with the arrest of Mr. Gimenez, who spent the night at the Turner Guilford Knight Correctional Center, the decidedly unglamorous county jail, clad in one of the red jumpsuits reserved for high-profile inmates.

The Morton’s affair — tawdry, overblown and involving a cast of characters who are largely unknown outside of Florida — offers a window into Miami’s dynastic and often impenetrable politics, run by generations of Cuban American families that have been in power for decades. Understanding them requires detailed family trees and the patience to track long-unfolding feuds.

Mr. Gimenez, 44 and known as C.J., is the son of Representative Carlos A. Gimenez, Republican of Miami. The elder Mr. Gimenez is the former Miami-Dade County mayor, the most powerful public executive in the state of Florida after the governor. The younger Mr. Gimenez, a government affairs lawyer, once lobbied on behalf of Donald J. Trump’s business interests locally before Mr. Trump was elected president.

Mr. Díaz de la Portilla, 57 and known as D.L.P., is a former Republican state senator and the middle of three brothers who have all served in local and state office. In one memorable incident more than 20 years ago, his younger brother raced to a Spanish-language radio station after hearing a political rival insult his father on air, prompting the host to exclaim, “Hail Mary, mother of God, the Díaz de la Portillas are out there!” (No one was charged in the subsequent parking lot brawl.)

But not long after, there were hints of trouble. In 2012, Mr. Díaz de la Portilla and a guest were arrested in Boston after ignoring hotel security guards who ordered them to stop smoking cigarettes in their room and then told them to leave. (The misdemeanor trespassing charges were dismissed before arraignment.) The guest was Tania Cruz-Gimenez, Mr. Gimenez’s wife.

It is unclear what led to the dust-up between Mr. Gimenez and Mr. Díaz de la Portilla on Wednesday at Morton’s in the upscale city of Coral Gables, where a two-course “power lunch” special runs $37.

Mr. Díaz de la Portilla had ordered a burger with extra onions, dining at an outdoor table with the brother of the Coral Gables mayor, who is a lawyer at a big firm, and with a former Miami city commissioner who once served prison time for mortgage fraud, Medicare fraud and voter fraud, and now runs a firm of insurance claims adjusters.

After Mr. Gimenez approached and struck Mr. Díaz de la Portilla, the detective “made contact” with Mr. Gimenez, according to the arrest affidavit. He identified himself as a Miami police officer. Mr. Gimenez questioned his jurisdiction, since the restaurant was in Coral Gables. But a mutual aid agreement allows officers from one city to intervene in another city when appropriate.

“I held onto the defendant by his coat and instructed him to calm down and stop resisting,” the detective said in the affidavit.

The incident prompted other Morton’s patrons to call 911 to report the scuffle; some said a police officer needed help. Patrol officers swarmed the restaurant. The authorities had a mess on their hands.

Chief Edward James Hudak Jr. of the Coral Gables police — following what he said was typical procedure for arrests linked to public officials — phoned Representative Gimenez to inform him that his son had been arrested. (In another sign of how Miami ties run deep, Chief Hudak’s wife was once one of Representative Gimenez’s deputy mayors in County Hall.)

The Coral Gables police are investigating Mr. Gimenez’s purported battery on Mr. Díaz de la Portilla, but not the detective’s actions, which would fall under the purview of the Miami police. There are witness statements, 911 recordings and surveillance video, none of which have been released. No one was hurt.

Mr. Díaz de la Portilla issued a pair of statements — one in English, one in Spanish — blasting Mr. Gimenez as “cowardly.” In Spanish, but not in English, he described Mr. Gimenez as having “grazed my hair with his nails.” He added that those were the actions of “little girls,” and said, “Real men come from the front and not from behind.”

“I wrote them at different times and they are very similar,” Mr. Díaz de la Portilla said in a text message on Friday when asked why the statements were not the same. (“Is this what the NYT is writing about these days?” he added. “Sad.”)

A gaggle of television news cameras awaited Mr. Gimenez when he was released from jail on Thursday. Dressed in a trim blazer, he declined to elaborate on the previous day’s events.

“This is going to get dropped,” he told a reporter, after addressing her as “sweetheart.” “You should be covering real news.”