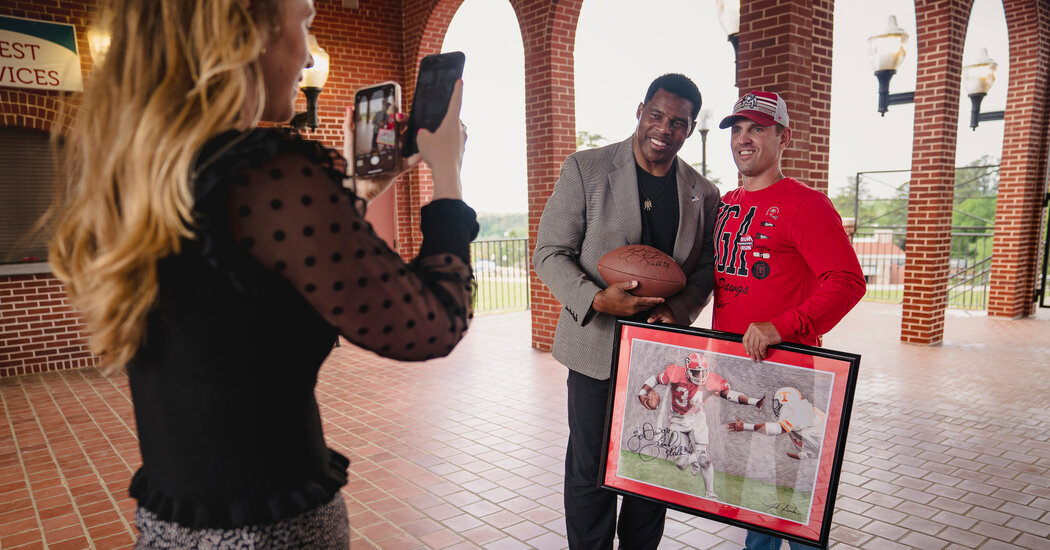 LaGRANGE, Ga. — Most came dressed in University of Georgia jerseys, hats and T-shirts. Some carried footballs and framed posters. It was a campaign stop for a Senate candidate, but for many Georgians who came to see Herschel Walker, politics was hardly the only draw.

“It’s ‘Herschel, Herschel, Herschel’ — he doesn’t even have to have his last name,” said Gail Hunnicutt, a Walker fan since he dominated the University of Georgia football program from 1980 to 1982, winning the Heisman Trophy and unending adoration from many in football-obsessed Georgia. “I’m wondering why he wants to jump into the mess of Washington politics. But we’re proud to have him there.”

Mr. Walker is a risky choice for a Republican Party desperately trying to win back a Senate seat lost in the state’s Democratic wave two years ago. He has never held elected office, and he lived in Texas for the better part of the last decade. He has been accused of domestic abuse and has acknowledged violent thoughts as part of his past struggles with mental illness. He has made exaggerated and false claims about his business success, according to local news reports. And his public speeches are characterized by unclear and sometimes meandering talking points.

But little of this seems to matter to the Republican voters embracing his Senate primary campaign. Mr. Walker’s one-name-only fame has propelled him to the top of the field. In less than nine months as a candidate, he has amassed $10 million in cash. He campaigns with no fear of his primary opponents and all the confidence of an all-star athlete.

“I go into these cities and give people hope,” Mr. Walker said on Monday in an interview at the meet-and-greet in LaGrange, a small town about an hour south of Atlanta. “Most everybody in Georgia knows who I am. The people that want to try to deny they know who I am aren’t from Georgia. Let’s be real.”

But even some Republicans worry their party is being blinded by fandom. Mr. Walker may be on track for victory in the May 24 primary, but he faces a harder challenge against Senator Raphael G. Warnock.

Mr. Warnock, the freshman Democrat, has raised more than $13 million in the last three months, according to campaign finance data, and he will be backed by national Democrats eager to prove their 2020 victories were more than just a rejection of former President Donald J. Trump, but instead were a permanent shift in a rapidly changing Southern state. Mr. Warnock’s campaign declined to comment.

Mr. Walker campaigns as both a political outsider and a celebrity, drawing comparisons to Mr. Trump, whose friendship and early endorsement have lifted Mr. Walker’s prospects. But unlike Mr. Trump, Mr. Walker eschews large events and spends most of his time at private fund-raisers, listening sessions and small-scale grass-roots events with limited media access. In speeches, he zigzags from hot-button issues such as transgender students’ participation in high school sports, to riffs on the mechanics of his campaign.

“When I decided to run a lot of people called. The senators called and said, ‘Herschel can you raise the money? Herschel can you get people to cross over?’ I’m doing both,” Mr. Walker said, alluding to some Republicans’ concerns about his appeal to Democratic and independent voters.

Despite his war chest, Mr. Walker has not yet bought any television or radio advertisements. He skipped the first primary debate in April and has not committed to attending another scheduled for May 3.

That has prompted some supporters to question his strategy. Debra Jo Steele, a county party official who attended Mr. Walker’s event on Monday wearing a navy blue Trump cap, asked Mr. Walker directly why he did not attend the Senate debate.

Mr. Walker said he was out of town, receiving a business leadership award. Several in the crowd hushed her down and yelled for him to call on someone else.

“It would be nice to have him be in a debate and he should sharpen his skills before he goes,” Ms. Steele, the secretary of the Republican Party in Heard County, north of LaGrange, said in an interview after Mr. Walker’s remarks. “If he wins the primary, he’s going to have a debate, I’m sure, with the Democratic contender. And it’s just kind of arrogant not to be on the stage.”

Gary Black, a former state agriculture commissioner and next highest-polling candidate in the Senate race, is the loudest Republican voice against Mr. Walker. Mr. Black has tried to highlight Mr. Walker’s turbulent past and argue that he is unelectable in the fall.

In March, Mr. Black’s campaign launched a website detailing the accusations of violence, complete with a two-minute advertisement listing them. A super PAC supporting Mr. Black’s candidacy, Defend Georgia, has said it plans to help spend millions on ads carrying a similar message, though none have aired. Their goal is to pull Mr. Walker below a 50 percent threshold, forcing a runoff. Recent polls show Mr. Walker winning nearly two-thirds of Republican primary voters.

Mr. Walker’s ex-wife has accused him of attacking and threatening to kill her. Mr. Walker hasn’t denied the allegations, but he and his campaign have denied accusations made by two other women who say he threatened and stalked them. In his book published in 2008 and later interviews, he attributed past erratic and threatening behavior to a diagnosis of dissociative identity disorder.

“He obviously had a very public fall with mental health and has gotten back up,” said Mallory Blount, a spokeswoman for Mr. Walker’s campaign.

For some Republicans, that explanation is part of Mr. Walker’s appeal.

“He’s adjusted to every circumstance in every situation, where he was,” said Ms. Hunnicutt. When asked if she could see herself supporting any other Republican in the race, she replied quickly.