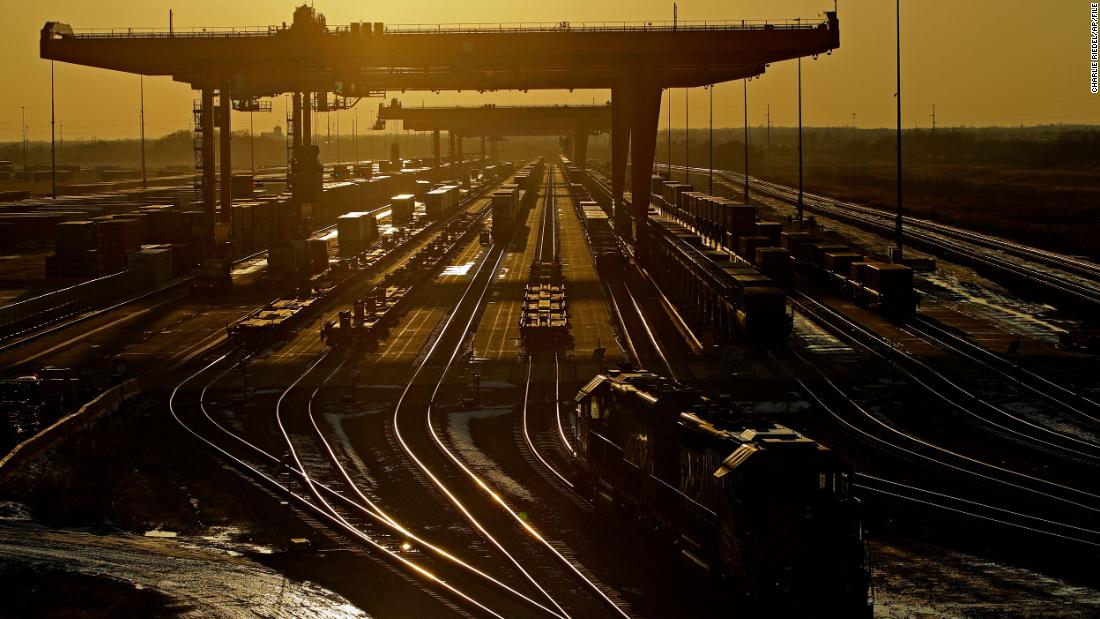 That is why the risk of the first national railroad strike in 30 years is so worrying to economists and businesses.

“At a week, you see real damage in the US economy,” said economist Patrick Anderson of Anderson Economic Group, which conducts impact estimates on work stoppages.

If it lasts a week, a strike will mean reduced gas production, spoiled crops, a choked off supply of new cars and empty shelves at stores over the holidays. Your commute may be snarled. And for factory workers, there could be temporary layoffs in the near future.

America’s railroads remain crucial for keeping the US economy running smoothly. They carry nearly 30% of the nation’s freight, measured by the distance traveled and the weight of the cargo, according to the Bureau of Transportation Statistics. And there really isn’t an alternative if the trains stop running.

“Idling all 7,000 long distance daily freight trains in the US would require more than 460,000 additional long-haul trucks every day, which is not possible based on equipment availability and an existing shortage of 80,000 drivers,” said Chris Spear, CEO of the American Trucking Associations in a letter to members of Congress asking that they act to prevent a strike. “As such, any rail service disruption will create havoc in the supply chain and fuel inflationary pressures across the board.”

Anderson said it is impossible to come up with a dollar estimate for the impact on the economy at this point, but he said the costs will grow geometrically the longer the strike lasts, starting out at tens of millions of dollars and growing rapidly each day.

“It might only be millions, but that’s a lot if it’s your job that’s one that is being lost,” he said. “If we reach a week-long strike, we’re in uncharted territory,” he said.

The price of gas has been falling steadily for three months. But a rail strike could send prices shooting higher again due to limited supplies.

Just about all ethanol that goes into gasoline moves by rail. Without ethanol, gasoline wouldn’t be compliant with some environmental regulations. But even if those regulations could be waived, the lack of ethanol could increase the cost of a gallon of gas by about 16 cents due to the loss of tax breaks, according to Tom Kloza, global head of energy analysis for OPIS.

Although pipelines carry most crude oil to refineries, about 300,000 barrels move by rail each day, a volume that could supply about two mid-size refineries, according to data from the American Fuel and Petrochemical Manufacturers, the refineries’ trade group. Numerous chemicals used in the refining process also arrive via rail, and some lower-grade products and waste materials need to be shipped out by rail.

“If rail cars aren’t coming in regularly to pick up facility products, including the sulfur that refiners remove from crude oil, production will have to curtail,” the refineries’ trade group said.

The strike would be hitting at a particularly bad time for the nation’s agricultural industry. Bureau of Transportation Statistics data show that trains account for 27% of the distance grains travel when measured by weight.

“A rail stoppage on September 16 would hit right as the fall harvest accelerates in many parts of the United States,” said Mike Seyfert, CEO of the National Grain and Feed Association. “The economic damages across the food and agricultural supply chain would be swift and severe.”

The railroads started refusing to take new shipments of grain as of Wednesday in preparation for the possible strike. If the work stoppage happens, grain operators will load what they can onto rail containers sitting in their yards. But they won’t be able to move them out or accept additional grain from farmers, who will then have limited options to sell their crops.

In recent months there have been improvements to farmers’ supply chain issues suffered during the pandemic.

“The gains we’ve made in the last seven to eight months will be reversed largely if this strike happens,” said Terri Moore, spokesperson for the American Farm Bureau Federation.

In addition, farmers preparing to plant for the fall season could see shortages of the fertilizer they need, since the railroads have already stopped accepting shipments because they are classified as hazardous materials in many cases. That could hurt future supplies of crops.

“There definitely would be at least some price increase for consumers,” said Max Fisher, chief economist at the National Grain and Feed Association. “If our processing plants are not running, the food manufacturers that buy these ingredients won’t have access to them for an extended period of time. Depending on how long it would go on, we worry about scarcity — being able to actually get the food.”

Beyond domestic food prices, the strike could affect global food markets, since the US is a major grain exporter. With the war in Ukraine cutting off much the grain from that country, a disruption in US supply will only make a bad situation worse.

Car and truck production has already been hampered by a shortage of numerous essential parts, most notably computer chips. That has created a dearth of vehicles available for sale on dealer lots, which in turn has resulted in record high car prices.

But that’s nothing compared to what would happen with a prolonged rail strike. About 75% of cars built in US factories or imported here move by rail. There are nowhere near enough trucks to carry that many vehicles.

In addition, many of those parts move between suppliers and car assembly plants by rail. Production will quickly halt if those rail links are severed.

Eventually production would resume, but it would take some time to make up for lost output. Which means more upward pressure on car prices.

The snarl of container ships coming into West Coast ports is finally easing after years of backlogs and delays. And although things have gotten better, they are by no means “normal” yet.

As of Tuesday the Port of Los Angeles, the nation’s largest, said it had 27,000 shipping containers waiting to be loaded onto trains. That’s roughly three times as many as under normal conditions. Two thirds of the current inventory of containers have been there nine or more days, when none should have been there that long.

“Efficient rail operations are critical to the Port of Los Angeles,” said Gene Seroka, the port’s executive director. “With two-thirds of our cargo leaving California by rail, the supply chain and the US economy need all of us working at maximum effort.”

The peak season for imported goods heading to retailers ahead of the holiday shopping period is now. The National Retail Federation said last week it is concerned about shortages later this year if there is a rail strike.

“We are in the middle of the peak import season,” said the trade group. “Any rail network disruptions this month could have long-lasting negative effects on this important selling season. Product delays and shortages are correlated with inflation.”

Most factories aim to have parts and raw materials delivered just before they are used in assembly lines — a process known as “just-in-time” deliveries. And many factories depend on rail to get those parts and supplies, as well as to ship them out.

“For years now, America’s manufacturing workers have endured the effects of rapidly rising material costs and severe supply chain disruptions,” said a statement from the National Association of Manufacturers. A rail strike would “devastate the movement of manufactured products that families depend on.”

The rail strike could result in temporary plant closures, as happened across the global auto industry due to the shortage of parts and computer chips brought on by the pandemic.

Amtrak already has cut service on many of its long distance trains. The company owns roughly 700 miles of track, mostly between Boston and Washington, DC, but about 97% of its 22,000 mile system runs on freight lines.
Many commuter railroads also are preparing to shut much of their operations for the same reason.

That could mean more commuters driving to work, and more traffic and congestion even for those who don’t normally take a train.