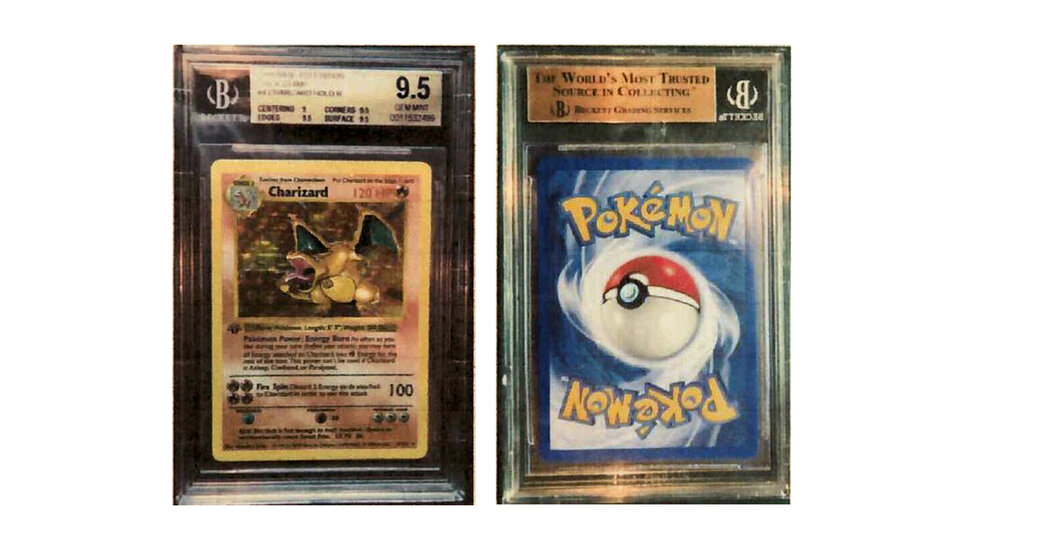 The forfeitures have included Lamborghinis, gold bars and luxury goods from Dior.

But this may be the oddest seizure yet. Federal authorities say that they did not know at first what to make of a rare Pokémon trading card that they seized from a Georgia man who had used coronavirus relief money to buy the collectible.

The man, Vinath Oudomsine, 31, of Dublin, Ga., was sentenced to three years in federal prison on Friday, according to prosecutors, who said that he pleaded guilty last October to defrauding a loan program operated by the Small Business Administration.

In January 2021, Mr. Oudomsine spent $57,789 of loan proceeds from the program on the card, a first-edition Charizard released in 1999 that features a dragon-like creature from the Pokémon franchise, court documents show.

Five months earlier, he had received an $85,000 loan from the program for his small “entertainment services” business, which prosecutors said that he had claimed had 10 employees and gross revenues of $235,000 during the 12 months before the coronavirus pandemic. However, prosecutors said, there was no such business.

The fraud scheme came amid a booming market for older cards and Pokémon Trading Card Game packs. Some veteran collectors said that has somewhat cooled off compared with earlier in the pandemic.

There has been a steady stream of high-profile cases involving the misappropriation of coronavirus relief money. President Biden announced during his State of the Union speech last week that he would appoint a special prosecutor to investigate such cases.

“I would say a Pokémon card is a quite novel scenario,” Xavier A. Cunningham, an assistant U.S. attorney in the Southern District of Georgia, said on Tuesday. “We don’t inherently know what the market is for these cards. We had to hustle to find someone to give us a valuation for it.”

Mr. Cunningham, who is chief of the office’s asset recovery unit, said that Mr. Oudomsine’s family turned the card over to an F.B.I. agent in Atlanta. It was sealed in a protective case and included several proofs of authenticity, according to photographs released by the U.S. Attorney’s Office.

The card is now in the possession of the U.S. Marshals Service, which Mr. Cunningham said would auction it and put the proceeds into a seized-assets fund maintained by the Justice Department. The money will then be returned to the Small Business Administration, he said.

“Our more typical criminal would use the money to buy real estate and cars,” Mr. Cunningham said, adding, “boats, planes.”

C. Brian Jarrard, a lawyer for Mr. Oudomsine, did not immediately respond to a request for comment on Tuesday.

Beckett, a prominent authentication company for collectibles, graded the card a 9.5 out of 10, meaning that it is in “gem mint” condition, according to labels on the card and the company’s website. The company did not immediately respond to a request for comment on Tuesday.

Charlie Hurlocker, a Pokémon card expert and dealer, said that even if the card’s purchase had been legitimate, it was an ill-advised one on Mr. Oudomsine’s part.

“He was buying at the peak of the market,” Mr. Hurlocker said on Tuesday. “It was a terrible short-term purchase. Nobody was willing to pay more than him.”

Mr. Hurlocker said that first-edition base sets of the Charizard cards are especially coveted if they are in “pristine” condition, the highest grade that the cards can get.

Cards graded a 9 or 9.5 are more readily available than those with a grade of 10, like one that Mr. Hurlocker said that he bought for $220,000. He noted that a card with that grade was sold for $336,000 on March 4 by Heritage Auctions, a sum that included a buyer’s premium.

“This is the most desirable card in the hobby,” he said of Charizard.

But the federal government could have a hard time right now recouping the amount that Mr. Oudomsine paid for the card, Mr. Hurlocker said.

“If they hired me as a professional consultant,” he said, “my advice would be to hold out.”