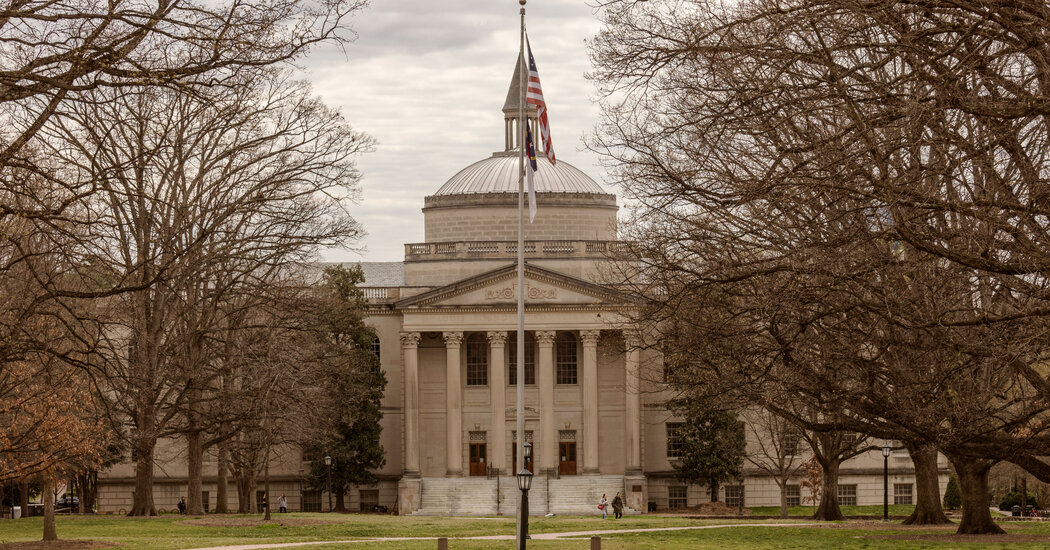 A prestigious national academic group charged on Thursday that North Carolina’s legislature had politically interfered with the operations of the University of North Carolina for more than a decade, creating a hostile academic and racial climate at its campuses, including the flagship in Chapel Hill.

A report by the American Association of University Professors details how Republican lawmakers, after taking over the General Assembly in 2010, wrested control of the university system’s Board of Governors as well as the trustees of its 17 individual campuses, influencing chancellor appointments and closing academic centers dedicated to fighting poverty, pollution and social injustice.

After reviewing the tensions surrounding the toppling of the Confederate soldier statue at Chapel Hill known as “Silent Sam,” as well as the decision-making around a job offer to the New York Times journalist Nikole Hannah-Jones, the report concludes that racism is institutionalized in the system. In a state that is about 20 percent Black, 5 percent of U.N.C. faculty members are Black.

Responding to the report, Kimberly van Noort, the university system’s senior vice president, said it was a “relentlessly grim portrayal of one of the nation’s strongest, most vibrant, and most productive university systems,” and “impossible to square” with the thriving campuses. She listed accomplishments including lowered tuition, improved graduation rates among low-income and minority students, and investments in six historically minority-serving institutions.

The association’s report, she added, “contains no empirical data about the true health of the university system.”

Previously, the administration had made attempts to address the racial issues criticized in the report, establishing a task force to examine the legacy of race and racism in North Carolina’s public higher education system, which issued its own report in 2020.

Many state university systems have been under political pressure, especially in states with Republican-led legislatures that view universities as centers of liberal indoctrination.

While acknowledging that several university systems have been targets of political interference, the professors’ association contends in its report that the frequency and intensity of controversies at U.N.C., coupled with mismanagement on the part of the system and campus boards, is singular.

The association, a national watchdog organization, has no official authority over universities, and its actions are largely symbolic. But the report — and a possible official sanction by the group — could blemish the reputation of the nation’s oldest public system and one of the most prestigious. It could also hurt future efforts at recruiting faculty.

Michael C. Behrent, a professor of history at Appalachian State University in Boone, N.C., who heads the North Carolina chapter of the organization, said he hoped the report would spur change.

“We need to make sure there is not a single party that is unilaterally controlling the Board of Governors and boards of trustees,” he said.

Tim Moore, the speaker of the State House of Representatives, defended the legislature in a statement, saying, “Our State Constitution gives the legislature the sole responsibility to govern the university system, and Republican members of the General Assembly will always ensure that the voices of the taxpayers across this state who fund U.N.C. are heard in its governance.”

The association’s report says that the Republican takeover of both houses of the General Assembly in 2010 — achieved for the first time in more than a century — marked the start of what it calls a “new era.”

Appointees to the university system’s Board of Governors as well as the trustees of individual campuses became “more uniformly Republican, more interested in the political ideologies of campus actors, and less experienced with higher education than their predecessors,” the report says.

At the legislature’s behest, the system began a review of 237 campus specialty centers in 2014, culminating in the closure of three centers.

Two of them were led by faculty critics of the state’s leaders, and one, the Institute for Civic Engagement and Social Change at North Carolina Central University in Durham, had been funded by George Soros’s Open Society Foundations, a frequent target of conservative ire.

The next year, the Board of Governors moved to ban Chapel Hill’s law school from participating in litigation, ultimately voting to ban its Center for Civil Rights from taking on new clients, many of whom were indigent.

The report also blasts legislative meddling in the appointments of university leadership, including what it calls a “highly unorthodox” method for chancellor searches.

The report says that political interference played a role in the 2021 selection Darrell T. Allison as chancellor at Fayetteville State University, one of six state institutions that serve mostly students of color.

The report says that Mr. Allison, a former school choice lobbyist, was added to the list, though he was not picked by the search committee and critics said he lacked credentials.

But the report’s most damning criticism involves issues of race.

It chronicles the story of Carol Folt, the former chancellor at Chapel Hill who now heads the University of Southern California. Under pressure from the board to find a place for Silent Sam, which had been torn down by protesters, Ms. Folt announced instead that she was resigning and removing the statue’s remains.

The board then agreed to pay the Sons of Confederate Veterans $2.5 million to build an off-campus site for the statue. One graduate student tweeted that the university was giving the statue “back to the racists.”

The agreement was overturned by a court.

The report also criticized the university’s handling of a job offer to Ms. Hannah-Jones, a writer for The Times Magazine and leader of the 1619 Project, which sought to reframe the country’s history by putting the consequences of slavery and the contributions of Black Americans at the center of the national narrative.

Although the Chapel Hill journalism school recommended that Ms. Hannah-Jones, who is Black, be offered a tenured professorship, the university, reportedly after pressure by a powerful donor, instead offered her a nontenured job.

After public outcry, the trustees ultimately voted to grant her tenure. But Ms. Hannah-Jones declined the offer and joined the faculty of Howard University.

The report says that the Silent Sam and the Hannah-Jones controversies “sent a message to faculty members of color throughout the system, making them feel unwelcome, undervalued and insecure.”