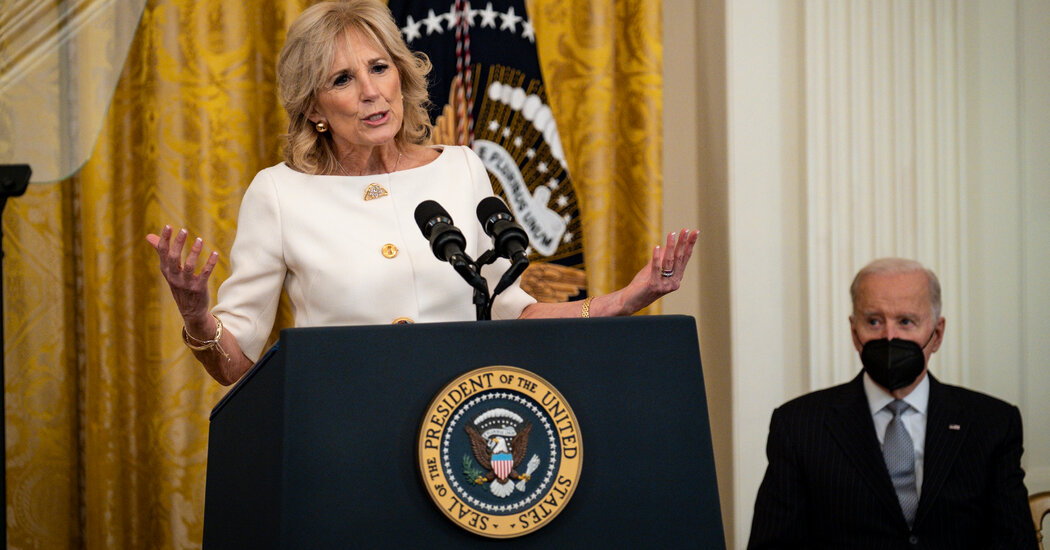 WASHINGTON — During his first address to Congress last spring, President Biden said that Jill Biden, the first lady, would lead an effort to fulfill his administration’s promise to provide two years of free community college to all eligible students.

That provision, tucked inside a massive social spending package that has struggled to win the support of all the senators who caucus with the Democrats, was the first lady’s signature legislative initiative. But on Monday, Dr. Biden addressed a summit of community college leaders and confirmed what her husband has recently suggested: The plan has no future in a bill that Democrats are trying to whittle down in order to salvage.

“One year ago, I told this group that Joe, my husband Joe, was going to fight for community colleges,” she said at the Community College National Legislative Summit in Washington. “But Joe has also had to make compromises. Congress hasn’t passed the Build Back Better legislation — yet. And free community college is no longer a part of that package.”

The writing had been on the wall. Democrats had moved away from the provision, and Dr. Biden has previously said that the current political climate meant that it might not be the “right time” for free community college to pass as part of a social spending bill. But her remarks on Monday were her starkest acknowledgment yet that a measure she had championed is dead.

“We knew this wouldn’t be easy,” Dr. Biden said. “Still, like you, I was disappointed. Because, like you, these aren’t just bills or budgets to me, to you, right? We know what they mean for real people, for our students.”

And then she added an aside that was not in her scripted remarks: “It was a real lesson in human nature that some people just don’t get that.”

It is unusual for first ladies to weigh in on the defeat of a West Wing policy issue, but Dr. Biden, a community college English professor, was personally invested in the issue.

She spent her first year visiting community colleges, but did not campaign for the support of Democratic senators and House members who wanted to pare back or eliminate the provision outright. Privately, advisers to both the president and the first lady say that was because the East Wing was never given a signal that the measure would stay in the bill’s final version, despite Dr. Biden’s focus on the provision.

For months, Mr. Biden has told Democrats that free community college would most likely have to be cut, including in one private meeting with progressive lawmakers last October. The bill would have originally committed $45.5 billion to waive two years of tuition at community colleges for five years. States would have to opt in, and the federal government would cover the cost of the program for the first year. The federal contribution would decrease by 5 percent each year after that, with states covering the rest.

But a White House framework for an intended compromise, unveiled in October, did not include the promised two years of free community college. And the House-passed $2.2 trillion version of the plan contains additional aid for community colleges and grant programs, but not the tuition-free provision.

Mr. Biden has all but publicly abandoned the measure, telling reporters in January that he doubted free community college could be included in a renewed version of the spending bill.

“There’s two really big components that I feel strongly about that I’m not sure I can get in the package,” Mr. Biden said. “One is the child care tax credit, and the other is help for cost of community colleges.”

Democrats are still exploring expanding tuition assistance for low- and middle-income students. But how big a program they will support, and how far that approach will go toward increasing access to higher-paying jobs — and economic competitiveness overall — remains to be seen.

Research has shown that waiving tuition at community colleges could lift not just enrollment among students who might not otherwise have attended college, but also their wages for years to come. Eliminating tuition makes the decision to enroll much easier, economists and researchers said. The plan was also supposed to financially shore up the colleges themselves, which have suffered disproportionately during the pandemic.

Critics of the community college plan had pointed to high dropout rates and poor outcomes at some of the schools; fewer than 40 percent of community college students earn a degree within six years. Dr. Biden, for her part, has often publicly praised her students as resilient and hardworking.

“My students work incredibly hard to make it to class, often between work and raising families,” she told Good Housekeeping last August. “They want to learn.”

Like her husband, advisers say, Dr. Biden will pivot toward highlighting legislative wins, including the bipartisan infrastructure bill and the coronavirus relief package. On Wednesday, she will travel to the University of Minnesota with Xavier Becerra, the secretary of Health and Human Services, to highlight the American Rescue Plan’s investments in child care.

But she said the president will still be searching for ways to incorporate community college benefits in future initiatives.

“When you lose, you work harder,” Dr. Biden said, “and you come back for more.”