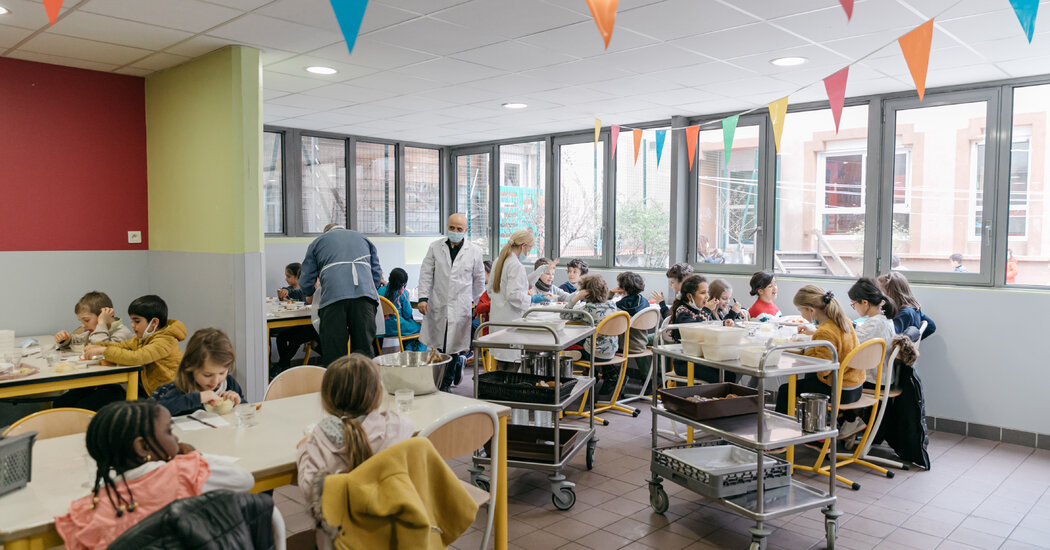 LYON — Grégory Doucet, the mild-mannered Green party mayor of Lyon, hardly seems a revolutionary. But he has upended France by announcing last month that elementary school lunch menus for 29,000 Lyonnais children would no longer include meat.

An outrage! An ecological diktat that could signal the end of French gastronomy, even French culture! Ministers in President Emmanuel Macron’s government clashed. If Lyon, the city of beef snouts and pigs’ ears, of saucisson and kidneys, could do such a thing, the apocalypse was surely imminent.

“The reaction has been quite astonishing,” Mr. Doucet, 47, said.

He is a slight man whose mischievous mien and goatee gives him the air of one of Dumas’s three musketeers. A political neophyte elected last year, he clearly finds it a little ludicrous that he, an apostle of less, should end up with more, sitting beneath a 25-foot ceiling in a cavernous mayor’s office adorned with brocade and busts of his forbears. That tweaking a local school menu has split the nation leaves him incredulous.

“My decision was purely pragmatic,” he insisted, eyes twinkling — a means to speed up lunches in socially distanced times by offering a single menu rather than the traditional choice of two dishes.

Not so, thundered Gérald Darmanin, the interior minister. He tweeted that dropping meat was an “unacceptable insult to French farmers and butchers” that betrays “an elitist and moralist” attitude. Julien Denormandie, the agriculture minister, called the mayor’s embrace of the meatless lunch “shameful from a social point of view” and “aberrational from a nutritional point of view.”

All of which prompted Barbara Pompili, the minister of ecological transition, to speak of the “prehistoric” views, full of “hackneyed clichés,” of these men, in effect calling two of her cabinet colleagues Neanderthals.

This heated exchange over little illustrated several things. Mr. Macron’s government and party, La République en Marche, remain an uneasy marriage of right and left. The rising popularity of the Greens, who run not only Lyon but also Bordeaux and Grenoble, has sharpened a cultural clash between urban environmental crusaders and the defenders of French tradition in the countryside.

Not least, nothing gets the French quite as dyspeptic as disagreement over food.

The mayor, it must be said, made his move in a city with an intense gastronomic tradition. At the Boucherie François on the banks of the Rhône, a centennial establishment, Lyon’s culture of meat is on ample display. The veal liver and kidneys glistened; cuts of roast beef wrapped in pork fat abounded; the heads of yellow and white chickens lolled on a counter; the saucissons, some with pistachio, took every cylindrical form; the pastry-wrapped pâté showed off a core of foie gras; and pigs’ trotters and ears betrayed this city’s carnivorous inclinations.

“The mayor made a mistake,” said François Teixeira, a butcher who has worked at François for 19 years. “This is not good for Lyon’s image.”

Certainly, the mayor’s decision came at a sensitive moment. The right in France has expressed indignation that the country is being force-marched, through politically correct environmental dogmatism, toward a future of bicycles, electric cars, veganism, locavores, negative planet-saving growth and general joylessness — something at a very far cry from stuffing goose livers for personal delectation.

Last year, Pierre Hurmic, the Green party mayor of Bordeaux, touched a nerve when he rejected the city’s traditional Christmas tree because it’s “a dead tree.” Mr. Doucet’s culinary move was part of “an ideological agenda,” the right-wing weekly Valeurs Actuelles proclaimed in a cover story. “The canteens of Lyon were just a pretext.”

Mr. Doucet, who describes himself as a “flexitarian,” or someone who favors vegetables but also eats a little meat, argues that the Education Ministry forced his hand. By doubling social distancing at schools to two meters, or more than six feet, it obliged the mayor to accelerate lunch by offering just one dish.

“There’s a mathematical equation,” he said. “You have the same number of tables, but you have to put fewer children at them, and you can’t start the lunch break at 10 a.m.”

But why nix meat? The mayor, who has a 7-year-old in elementary school, rolled his eyes. “We have not gone to a vegetarian menu! Every day, the children can eat fish or eggs.” Because a significant number of students already did not eat meat, he said, “we just took the lowest common denominator.”

It was not, Mr. Doucet said, an ideological decision, even if he aims over his six-year term to adjust school menus toward “a greater share of vegetable proteins.”

The mayor continued: “Most of the time these days there’s not much choice. You don’t have the choice to go to a museum, or to the theater, or to the cinema. It’s indecent for the right-wing opposition to say that I am trampling on our liberties in the context of a state of emergency.”

Mr. Macron has adopted a balancing act between his embrace of a Green future and, as he put it last year, his rejection of “the Amish model” for France. The president tries to differentiate rational from punitive or extreme environmentalism.

The president, casting his net wide as usual ahead of regional elections in June, wants to appeal to conservative farmers while attracting some of the Green vote. During a recent visit to a farm, he attacked attempts to forge a new agriculture based on “invective, bans and demagoguery.” In an apparent allusion to the Lyon fiasco, he has said “good sense” should prevail in balanced children’s diets and noted that, “We lose a lot of time in idiotic divisions.”

His government has proposed a Constitutional amendment, the first since 2008, that, if approved in a referendum, would add a sentence to the effect that France “guarantees the preservation of the environment and biological diversity and fights against climate change.”

The right has expressed opposition to the change. It still has to be reviewed by the right-leaning Senate. Another bill sets out possible reforms for a greener future that include banning advertisements for fossil fuels and eliminating some short-haul domestic flights.

Mr. Doucet is unimpressed. “Macron is not an ecologist. He is a modern conservative. He knows there’s a problem, so he is ready to make some changes, but he does not measure the size of the problem. Can you tell me one strong step he has taken?”

For now, the meatless Lyon school lunches are still being served. Children seem just fine. On Friday, a Lyon administrative court rejected an attempt by some parents, agricultural unions and local conservative politicians to overturn the mayor’s decision, ruling that the “temporary simplification” of school menus did not pose a health risk to children.

Mr. Doucet says that when the health crisis eases, but not before, he will be able to offer a choice of school menus again, including meat. Meanwhile, Mr. Denormandie, the agriculture minister, has asked the prefect in the Lyon area to look into the legality of dropping meat.

“Mr. Denormandie’s accusation that we are antisocial is a lie,” Mr. Doucet told me. “He said we were denying meat to the poorest people with the most precarious existences, which is false. He should have been fired at once.”

Boris Charetiers, a member of a parents’ association, said the mayor was being closely watched. “We are vigilant,” he said. “We don’t want this to be a definitive decision. Our children cannot be hostages to ecological political conviction.”

As for Mr. Teixeira, the butcher, he cast his eye appreciatively over the vast selection of meat. “We have canine teeth for a reason,” he said.