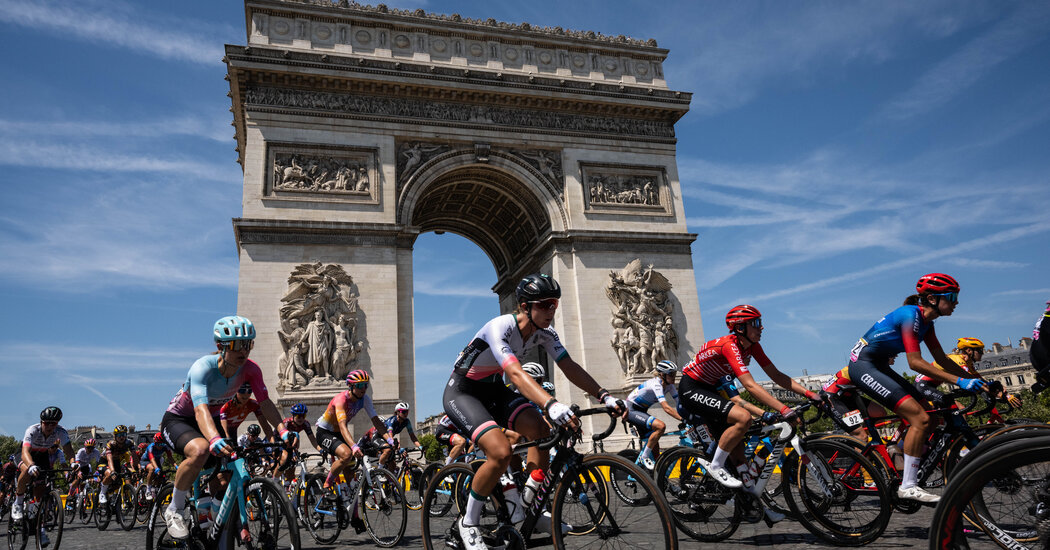 MEAUX, France — After winning Stage 2 of the Tour de France Femmes, the Dutch cyclist Marianne Vos pulled on the Tour leader’s yellow jersey for the first time and explained that no, actually, this special moment was not something that had always been a dream for her.

As a child, Vos had attended the Tour de France every summer and camped with her family along the course for the entire three weeks, shouting encouragement as the riders sped across flat roads, pedaled up curvy mountain passes and flew down steep slopes. That was where Vos, an Olympic gold medalist and winner of numerous world championships, fell in love with cycling. But the race was only for men, so it was never her goal to win it.

Over time, though, as she became one of the most accomplished women’s cyclists in history, it dawned on her: Why should men get all the media attention, fan adulation and money that only the Tour de France can bring?

This realization was partly how the Tour de France Femmes was revived this week after a 33-year absence. Vos was a major force in lobbying to bring back the women’s race, which was held once in 1955, then again from 1984 to 1989, before it disappeared again for a generation.

Not until Sunday, in the shadow of the Eiffel Tower and under a searing summer sun, did the women — 144 racers from 24 teams — get back on their bikes for a race associated with the Tour, the most prestigious race in cycling.

“Of course, you can say maybe it has taken too long, but yeah, but I’m just happy it’s here,” said Vos, who kept the yellow jersey on Tuesday after finishing second in Stage 3. It was her second runner-up finish in three days. “I think the time is right.”

For some cyclists and women’s rights advocates like Vos, the time has been right for at least a decade.

In 2013, Vos and three other cyclists — the American Kathryn Bertine, a women’s cycling advocate from Bronxville, N.Y.; the British former time-trial champion Emma Pooley; and the four-time Ironman champion Chrissie Wellington — were so sure it was the right time for a women’s Tour that they formed a group called Le Tour Entier (French for the Whole Tour) to rally public support for holding one.

Their efforts to convince the Amaury Sport Organisation, or A.S.O. — the company that runs the Tour — worked, but only to a point.

A.S.O. agreed to host a race in 2014 that was clearly not the Whole Tour, considering that the first edition of the race was about 2 percent as long as the men’s race. The event, called La Course by Le Tour de France, was a one-day circuit race held on the final day of the men’s Tour, in Paris. Vos won that day, then won again in 2019.

A.S.O. was supposed to add three to five race days to that one-day race until the women’s race reached parity with the 21-day men’s race, Bertine said in a telephone interview on Monday, but that never happened. La Course was replaced altogether this year by the eight-day Tour de France Femmes — longer than La Course but not nearly as long as the men’s Tour.

“I do believe that the social pressure put on A.S.O. was the reason they finally, after eight years, decided to finally augment the women’s race,” said Bertine, who made a documentary called “Half the Road” that discussed the gender inequities in cycling. “My biggest fear is that this race will stay eight days long for another eight years because it’s frightening to look at the A.S.O.’s track record on this. They are dinosaurs who resisted this for a long, long time.”

Bertine lamented that women’s cycling went backward not long after the women’s Tour was held in 1984.

Six women’s teams raced that Tour at the same time as the men, with the women starting 35 to 45 miles out front each day. They rode 18 of the 21 stages, including climbing the intimidating Alpe d’Huez, and all but one of the women finished. Marianne Martin of Boulder, Colo., became the first American — female or male — to win the Tour de France.

On Sunday in Paris, wearing a sleeveless yellow dress the same color as the Tour leader’s jersey, Martin, 64, was at the start of the Tour de France Femmes to cheer the women’s racers. She recalled riding past thousands of fans at the 1984 Tour, just hours before the men’s race came into the city, and feeling the thrill the men had experienced annually since the race began in 1903.

People shouting. Flags waving. Cowbells ringing. She had never seen anything like it. On Sunday, the atmosphere felt the same — and that was exhilarating, she said.

One night at that 1984 Tour, she joined a men’s team for dinner and noticed that their hotel was much nicer and their food was much better than that of the women. Yet she was unfazed.

“I didn’t care because we were at the Tour de France and I got a massage every day and we were fed and got to race our bikes every day in France,” Martin said. “I didn’t have expectations for more.”

She recalled winning about $1,000 and a trophy. The men’s winner, France’s Laurent Fignon, won more than $100,000. This year, there is also a yawning disparity between men’s and women’s prize money.

There’s still a long way to go for women to achieve parity in the sport. The international cycling federation, for example, caps how far they can ride in one day, a distance that is much shorter than the men’s maximum. (The women’s Olympic road course, in another example, is 60 miles shorter than the men’s.) The men’s minimum salary on the WorldTour is higher than the women’s, and the budgets for women’s teams are often a pittance compared to the men’s.

Linda Jackson, owner of EF Education-TIBCO-SVB women’s cycling team, said the road to the top of the sport — and to equality — will take both time and a calculated plan for success, especially when building something sustainable.

Jackson, a former investment banker, started her team in 2004, with the goal to someday race in Europe. Her squad is competing on the women’s WorldTour and also in the Tour de France Femmes this year.

There are many signs that the sport is on the upswing for women, she said, including more races, more TV coverage and higher minimum salaries that help riders focus solely on their training (which means a higher level of competition).

It also was crucial that Zwift, a fitness technology company, signed a four-year contract as the marquee sponsor of the Tour de France Femmes. In 2020, the company paired with A.S.O. to host a virtual Tour de France during the pandemic, and viewership numbers for the women’s events were so high that Zwift eventually made a commitment to help A.S.O. bring the women’s Tour back to life.

“A.S.O., in particular, doesn’t do this because, ‘Equality for women, wow, wouldn’t it be good to have?’” Jackson said. “They are doing it because they see the growing momentum in the sport.”

She added: “They aren’t going to have a women’s Tour in 20 years if they lose money for three to four years. A.S.O. has to break even at least.”

Media exposure is the most important component for the race’s success, Jackson said, and with two and a half hours of live television coverage a day at this women’s Tour, “this one race has the potential to change our sport forever.” Kathrin Hammes, who rides for Jackson’s team, said: “People pay attention when they hear about the Tour de France. It’s the one race that everybody knows.”

Many of the women racing the Tour said an eight-day event was a good start, but that they already are hoping for more. The Dutch rider Annemiek van Vleuten, a race favorite, said she is ready for a three-week challenge, just like the test the men endure. She added that she would be “super excited” for an epic climb like the one up Alpe d’Huez because that would be another milestone for women’s cycling.

For now, the racers have several days left before reaching the final stages, which will be held in the Vosges Mountains and will end with a painful climb up La Super Planche des Belles Filles, a summit that is at times included in the men’s Tour.

And Vos — who has done nearly everything there is to do in cycling — has a few days left before she can look back and appreciate her roles as a racer and an advocate who helped make the entire event happen.

Maybe she will remember young girls cheering her name as they lined up along the course and watched the peloton take off on Stage 2. Or the group of men from a Brie-making society wearing creamy yellow cloaks and matching flat-topped hats who asked her for a selfie.

But early in the race, Vos said she could not think of anything but the many miles ahead.

“I’m so grateful for everybody who put their energy into making this race happen,” she said. “But I’m also focused on racing now. I will let it sink in and think about what happened maybe in the end, after the season, or in a couple of years even.”

Riding away, she said, “All I know now is that the Tour de France is bigger than sports.”