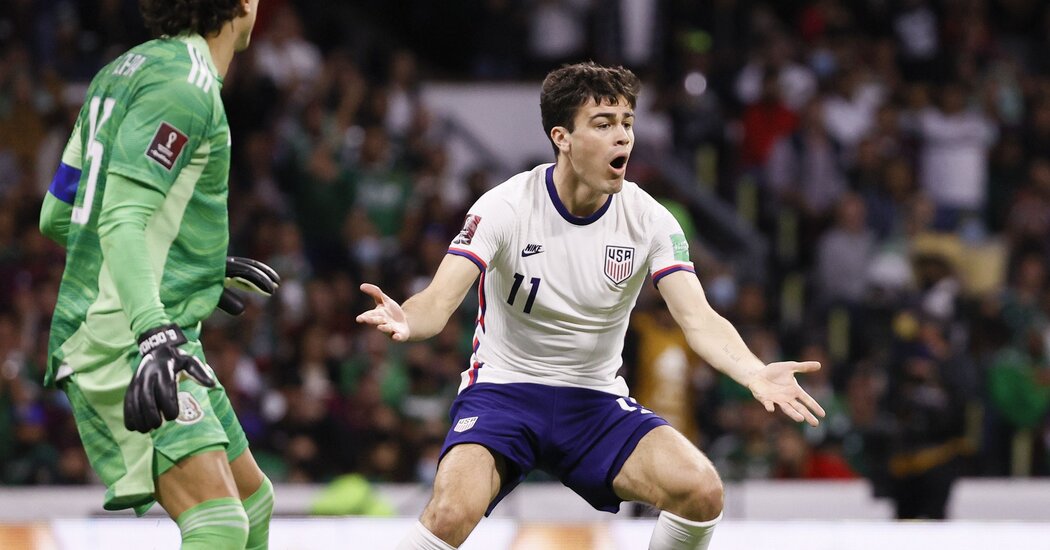 MEXICO CITY — As the final whistle blared late on Thursday night, Jordan Pefok fell to the grass and covered his face with his hands.

Pefok, a striker for the United States men’s soccer team, was tired, to be sure. He and his teammates had just battled Mexico to a 0-0 draw at Estádio Azteca, a commendable result at an altitude that can leave even elite athletes gasping for air.

But, more than that, Pefok seemed crestfallen. About 20 minutes earlier he had missed a sterling chance from point-blank range, shanking a shot so wide of an open goal that everyone in the stadium, fans of both sides, gasped in surprise.

What made the blunder even harder to believe was that Christian Pulisic, in the first half, had missed a surefire opportunity of his own from an eerily similar spot, whipping his close range shot straight at Mexico’s goalkeeper, even as the whole of the net gaped before him.

Either chance could have provided the winning difference in the American’s crucial, third-to-last World Cup qualifying match. How much will the miscues be rued? It will take a few more days to know for sure.

But in this way, the night — at the stadium in the Mexican capitol and inside others around the world where simultaneous contests were being played on Thursday — provided more reminders of the fine margins, hidden pitfalls and cosmic plot twists that regularly conspire to make World Cup qualifying cycles so entertaining and so maddening.

Italy produced dozens of chances in its playoff against North Macedonia, but the reigning European champions will miss the World Cup after they failed to score and their guests found a way. Sweden, likewise, is still alive after finding an extra-time winner against the Czech Republic, and Ecuador clinched its place in Qatar despite losing, 3-1 at Paraguay.

Uruguay is going to the World Cup after winning at home, but Canada lost and will have to wait at least a few days. The same is now true of Mexico and the United States, too; like Canada’s team, they are close enough to touch a World Cup berth, but also aware it can still slip away.

“I’m disappointed I missed a chance, and I would have loved to have won the game,” Pulisic said after his team’s draw at Mexico. “But this is the situation we’re in now, and we’re happy with it.”

Luck of course has a way of evening out, and in other ways, the United States was fortunate on Thursday.

All week long the players had been asked how they would manage their nerves in the hair-raising atmosphere of the Azteca, where rowdy, capacity crowds can induce claustrophobia in visiting teams. But the stadium they entered Thursday was oddly tame.

Capacity in the building was drastically reduced — to 50,000 from 87,000 — as part of an ongoing effort from the Mexican federation to curb persistent offensive chanting from the home team’s fans. The traveling American fans, cloistered as a group in a corner of the upper deck, at times made more noise than their far more numerous counterparts.

It was the Americans’ third consecutive draw in World Cup qualifying at the Azteca, a quietly surprising statistic that perhaps paints a picture of a team finding itself increasingly comfortable in its chief rival’s home.

Also working in the United States’ favor was an unexpected result in one of the other games: Panama, which began the day in fourth place, managed only a tie at home against Honduras, a team languishing in last place with little left to play for.

The Americans will meet Panama in their next match, on Sunday in Orlando, Fla., and Thursday’s scores now mean a win there would put the Americans in a strong position to earn one of the three automatic qualification spots in the region. They close their World Cup qualifying campaign on Wednesday on the road against Costa Rica, which also notched a surprising result, a 1-0 win over first-place Canada, to leapfrog Panama into fourth.

Then, before the game, the team ruled out defender Reggie Cannon, who tested positive for the coronavirus, and during it another two starters, Timothy Weah and DeAndre Yedlin, picked up yellow cards that ruled them out of the contest on Sunday night. To fill the sudden gaps, Shaq Moore, a defender who plays in Spain’s second division, was quickly called in. He will meet the team in Orlando ahead of Sunday’s game, and more than likely be in the starting lineup when it kicks off.

For the available players, the Panama game could represent a punishing turnaround. Many of them, particularly those in the starting lineup against Mexico, were visibly laboring by the end of the match.

Afterward, Berhalter praised his players for expending every ounce of energy and in the same breath played down the potential physical consequences for doing so.

“We’ll recover,” he said. “There’s plenty of time to recover.”

One factor helping the team’s cause will be the re-emergence of attacking midfielder Gio Reyna, who came on as a second-half substitute. The game marked Reyna’s first appearance for the team since September, when he sustained a leg injury that would keep him sidelined for months.

Reyna was the player who had supplied the potential assist to Pefok, cushioning the ball cleverly out of midair onto his teammate’s foot, before it was squandered. Reyna became visibly agitated after the miss, holding out his hands in disbelief, staring at Pefok for several seconds after the ball had trickled out of bounds.

The gesture may have come across as unseemly, but Reyna moments later delighted the crowd with a dizzying dribbling run, a meandering high-speed journey from back near the American penalty area almost all the way to the Mexican goal during which he beat a half dozen opposing players, some of them multiple times.

Berhalter compared the run to the famous solo goal Argentina’s Diego Maradona had scored at the Azteca at the 1986 World Cup.

“I had visions of that while Gio was dribbling,” Berhalter said. “Unfortunately he didn’t have an opportunity to finish it off.”

In World Cup qualifying, after all, there is often a razor thin line between glory and disappointment. The Americans will hope, in the coming days, they land on the right side of it.