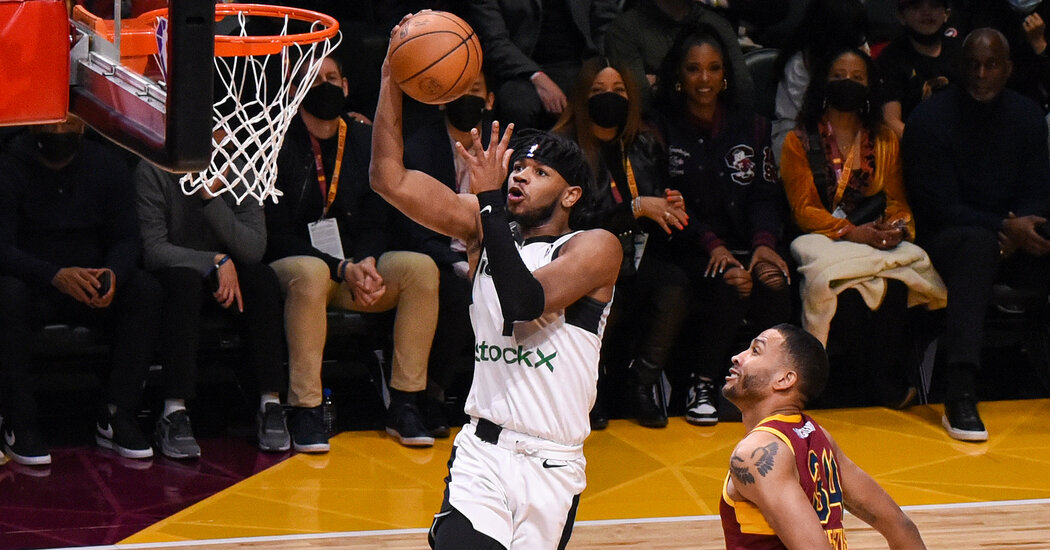 Amauri Hardy sat in the stands during the N.B.A.’s All-Star Weekend in Cleveland, watching his little brother, Jaden, on the court with the best young players in the league. He thought about the work Jaden had put into his game and the guts he showed in leaving home as a teenager to follow a nontraditional path into professional basketball.

“I’m not sure if he actually realizes how big of a moment it is, but I did because I grew up watching this game a lot,” Amauri Hardy said, proudly. “Just to see him out there with the jersey on with our last name on it, just representing for our whole family.”

He added, “He’s been making the best of these moments.”

Jaden Hardy, 19, does not play in the N.B.A., though he believes he could have been drafted last year, right out of high school, if the rules had allowed it. Instead, he signed with the N.B.A. G League Ignite, a developmental team in Northern California which allows elite prospects to play professionally in the United States before they are eligible for the N.B.A. draft.

This season, playing for the Ignite offered another perk. The N.B.A. included players from that experimental team in their festivities surrounding the All-Star Game. It was a chance for the league to showcase the Ignite, a project now in its second year. It also gave the players, many of them teenagers, an incomparable experience.

Four players from the Ignite — Jaden Hardy, Scoot Henderson, MarJon Beauchamp and Dyson Daniels — joined 24 first- and second-year N.B.A. players, 12 from each conference. The players were split into four teams, each with six N.B.A. players and one Ignite player, for a mini-tournament on the Friday of All-Star Weekend. The Ignite players Fanbo Zeng and Mike Foster were scheduled to participate in a shooting competition during the tournament, though Zeng couldn’t participate because of an injury.

“I was nervous before the game before I even got out there, but when I got out there it was kind of relieving,” Beauchamp said. He watches the All-Star events every year, he said, “so just seeing myself on the screen is pretty amazing.”

While league rules prevent players from going straight from high school to the N.B.A., playing for the Ignite can be a lucrative path for prospects when compared with playing in college — Ignite players can make up to $500,000 for the season. It can be a more familiar one than playing overseas, which some have tried.

They first heard that a few of them would get to participate in All-Star Weekend while at a practice in New York.

“I just thanked God, honestly,” Henderson said. “I was very excited. The first thing I did was call my parents and share the moment with them. They were just saying they were proud of me and what I’ve done through my year.”

The rest of their teammates attended Friday night’s events, as did family members and friends. Amauri Hardy was both a family member and a teammate — he plays on the Ignite along with his brother. Daniels’s father traveled from the family’s home in Australia and saw his son for the first time in months.

This is the second season the Ignite has existed. The team was designed to play a schedule that includes games against other G League teams and international exhibitions. Last year’s team produced two top-10 draft picks — Jalen Green, by Houston, and Jonathan Kuminga, by Golden State.

It is made up of prospects and veterans who serve as mentors. They practiced in Cleveland on Thursday and Saturday in preparation for a Sunday afternoon game against the Cleveland Charge, the Cavaliers’ G League affiliate.

Practices include competition and camaraderie for this group. They’re all trying to become lottery picks, most of them in this year’s draft.

“It’s a little tense in practice sometimes,” Foster said. “They’ve developed into brothers. We got that brotherly fight.”

On Friday morning, they sat for the Rising Stars media day. That’s when Jaden Hardy started to really feel part of the weekend.

“It was just fun to be able to be out there on the court with those young stars really and just being able to go out there and just laugh and compete,” he said.

One of those young stars was guard Tyrese Haliburton of the Indiana Pacers, a second-year N.B.A. player who met Hardy at a camp a few years ago.

“I think him being around us, seeing us young guys who are thriving in the N.B.A., I think he’s getting a little bit of a taste of that,” Haliburton said. “And his future is bright, so I’m excited for him to get to the league.”

Beauchamp caught two lobs for dunks from Cole Anthony, a second-year guard for the Orlando Magic.

“I’m sure it had to be a surreal experience,” Anthony said. “Not even playing in the N.B.A., being at N.B.A. All-Star, that has to be one of the dopest experiences a kid can experience. I wish I could’ve been there when I was in college just that year before going into the draft.”

Among the players Henderson was most excited to play with Friday night was LaMelo Ball, the N.B.A.’s 2020-21 rookie of the year.

When Henderson thought about his path to pro basketball, Ball was one of his role models. Ball left high school after his sophomore year to play professionally in Lithuania.

In his rookie year, Ball was very confident, noted Henderson, who joined the Ignite after his junior year of high school.

Henderson was part of Ball’s team for the Rising Stars Challenge, and thrilled for an opportunity to play with him. Conversely, Ball appreciated Henderson’s interest in his path.

But restrictions remain on players as they attempt to enter the N.B.A. Henderson, for example, will not be eligible for the draft until 2023.

“If I had the opportunity and that chance, I would definitely love to play in the N.B.A. next year,” Henderson said.

Henderson added that he had found the environment with the Ignite helpful given the mentorship opportunities and the chance to play against N.B.A. talent.

Beauchamp was a little nervous backstage on Friday before he was introduced as a participant in the Rising Stars Challenge to a bigger audience than he had ever played for.

But the butterflies dissipated by the time he arrived for introductions.

His appearance was an honor normally reserved for players in their first or second N.B.A. seasons, not those, like Beauchamp, preparing for the draft. Between his accomplished teammates and the N.B.A. veterans he saw sitting courtside, he looked around and thought about what he wanted for his future.