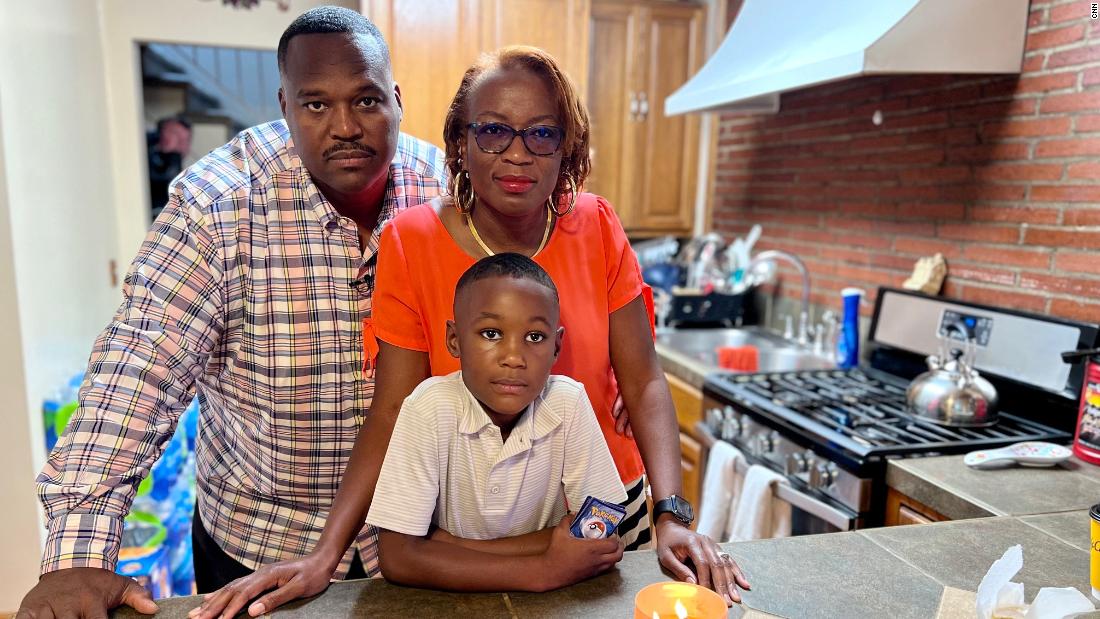 “I will die,” he says matter-of-factly when asked the reason why.

It’s a fear his father agrees with. At home in Jackson, Mississippi, Charles Wilson III — who lost his first namesake son when he was just a baby — gets bottled water for his family to drink, and he boils water for everything else.

“We’ve been crying about our water for a long time,” said the older Wilson.

Nearly a year before the headline-grabbing shutdown, Wilson and hundreds of other residents sued the city saying lead in the water was silently poisoning their children.

The city’s water system in early 2020 failed an Environmental Protection Agency inspection, which found the drinking water had the potential to be host to harmful bacteria or parasites.

Residents were without water for a month when pipes froze and burst during a 2021 winter storm. And the boil-water advisory remains in effect.

Wilson blames contamination for some of his son’s academic and developmental issues.

So even when the city says the water coming from his faucet is safe to drink, he will not take that chance.

And he’s right not to trust, say residents of Flint, Michigan, where a cost-saving change of supply in 2014 led to a water crisis that is still ongoing.

“The problem for kids especially is they are developing and they are growing. You don’t know the effects that the lead poison that they experienced today is going to have on them in five years, 10 years, 20 years,” she said. “It’s all like having a potentially walking time bomb.”

Bell and her husband Floyd have been raising their grandson, Matthew, since his mother died when he was young. High levels of lead were found in him when he was just a baby.

Lead consumption can affect the heart, kidneys and nerves. For children, the health effects can include impaired cognition, behavioral disorders, and even hearing problems.

Now seven years old, the Bells are seeing Matthew struggle in 2nd grade, mirroring some of the same issues of little Charles in Jackson.

Matthew, like Charles, is kind, inquisitive, and energetic. But keeping his concentration can seem impossible at times as well as being able to understand things that come to other students easily.

The Bells know you can’t simply flush lead out of your system with clean water but they are doing what they can to not make anything worse.

Even with new pipes and a different water source, the Bells don’t trust what comes out of their tap and buy about 10 cases of bottled water a week for cooking, brushing teeth, making coffee and for them and their dogs to drink.

Their neighbor LeeAnne Walters says she does the same.

She and her children still get the rashes that first appeared when the water went bad, she says, and much else besides.

“My children have had gone through extensive therapy for hand-eye coordination issues and speech impairments because of what’s happened,” she said.

“They have panic attacks if they go to the dentist and the dentist tries to give them water from a tap — everything has to be bottled.”

Walters rallied her community and testified to Congress about Flint’s problems. And she doesn’t think there has been justice or restoration yet.

Audra Bell echoes that with her advice to Jackson residents: “Just do the best that you can and keep your family safe.”

Legal action was taken in Flint and attorney Corey Stern helped win a $626 million settlement for Flint children from the city, the state and private water companies for their role in the crisis.

But he accepts that a lack of money to start with was also key.

“Like Flint, Jackson is an impoverished community, primarily minority, not a ton of local investment in infrastructure from the government through no one’s fault,” he said. “And so just like Flint, if you cannot afford on the front end to do things right, you’re never going to be able to afford to fix it on the back end.”

He called on federal, state and local politicians not to focus on what was easy or popular but to ask themselves what they would need to do if their own children were living in the toughest, most impoverished parts of their community and go from there.

Michael Regan, the new head of the Environmental Protection Agency, acknowledges the long history that leads to sudden crises.

“There has been a difference in lack of investment to water infrastructure in this country for decades, but especially in our Black and brown communities. It’s imperative that we correct this long-standing issue,” he told CNN while in Jackson this week.

He also wants to look forward. “We didn’t get into this situation overnight,” he said of Jackson, adding there was no quick fix. “But we’re working around the clock as quickly as possible to provide some stability to the system.”

He pointed to the new Bipartisan Infrastructure Law and hoped investment would rebuild trust as well as pipes and pumps.

Maura Allaire, an assistant professor of Water Economics and Policy at the University of California, Irvine, said the new federal money was much needed but would not be able to cover the full investment gap.

And more people are at risk than the residents of Flint and Jackson, she said.

“The good news is that the vast majority of water systems do deliver safe drinking water, so the majority of the US population does receive reliable water supply,” she said.

“The problem is about 7% or 8% of water utilities each and every year fall behind and do not meet national EPA standards and this equates to 21 million Americans not receiving water that is up to standard.”

And if water — essential to life — becomes tainted, the effects spread far and fast.

“It makes us sick, my kids sick,” said Mirambi Ford, a mother of five, in Jackson. “My little one-year-old, I don’t even know what to do because he can’t even talk. So, all he does is cry and there’s nothing I can do.”

Ford was raised in Jackson, has family all around and wants to stay. But that may not be possible.

“I’ll never give up on my kids,” she said. “I’m trying my best not to give up on Jackson, but it seems to the point where it’s getting unbearable.”

Charles Wilson has no intention of giving up on his child either. When he was a baby Wilson says he paced the halls thinking of ways to protect his namesake. He is determined to help this son live his best life even if government officials have failed them.

“What if it was your child, your family who had no safe water?” he wants to ask of the leaders.

But it’s his child and he will look out for him.

With the schools back open in Jackson, he sends his boy off to learn. With bottled water in his book bag.