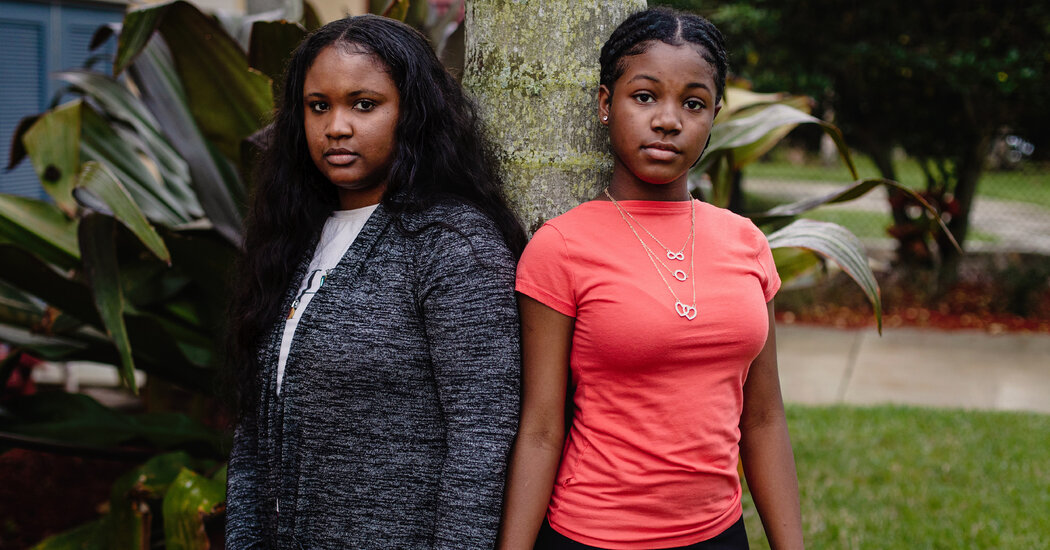 The family of a Florida girl who was held in a juvenile-detention center for 11 days after a classmate impersonated her on social media to make threats against their school has filed a lawsuit against the school and Instagram for their roles in the episode.

For the girl, Nia Whims, being jailed was “a horrifying experience,” a lawyer representing her said at a news conference on Wednesday. “She knew she didn’t do anything wrong, and yet here she is, behind bars.”

Nia’s mother, Lezlie-Ann Davis, said her daughter was “heartbroken” by what happened. After Nia was released from custody, on Nov. 29, “she threw away her school uniform,” Ms. Davis said.

The lawsuit, which was filed on Tuesday in state court in Broward County, accuses Nia’s school, Renaissance Charter School at Pines, and Meta, the social media giant that owns Instagram, of failing to protect her. The lawsuit says the family is also planning to add the Pembroke Pines Police Department in the suit.

Police officers arrested Nia without sufficient proof that she had written the threatening messages, the lawsuit claims.

Last week, the police department said in a statement that Nia’s family had delayed cooperating with the investigation, a claim that the family has denied.

The lawsuit also blames Instagram for not quickly providing the authorities with information that would have proved the teenager’s innocence. That information, the lawsuit says, is “literally available at the press of a button.”

Instagram also failed to protect the teenager, and the public, by not having policies in place to prevent people from being impersonated on its platform, the lawsuit says.

Colleen Reynolds, a spokeswoman for Renaissance Charter School at Pines, declined to answer any questions about the matter, citing pending litigation, but she wrote in an email, “We always have and always will take all appropriate actions to ensure our students and staff are safe.”

In November, Nia was a 13-year-old eighth grader at Renaissance. She had no prior disciplinary issues there but suffered relentless bullying, the lawsuit said.

Ms. Davis, at the news conference, said she had sought a meeting with school officials and the parents of the bullying students, but she met only once with a teacher. She said she saw no improvement in how her daughter was treated.

On Nov. 18, Nia was using her brother’s iPad and communicating with a classmate at the charter school.

The messages threatened to blow up the school and kill M.S., as well as a teacher at the charter school and that teacher’s family, the lawsuit says.

That teacher was informed of the messages and in turn alerted school officials and the police, the lawsuit says. When officers with the Pembroke Pines Police Department visited Nia’s home to ask her about the threats, Nia confirmed that she used Instagram but denied writing the messages, the lawsuit says.

On Nov. 19, the police arrested Nia at her home and took her to a juvenile detention center. She was released on Nov. 29 after Ms. Davis hired a lawyer who argued for her release, according to Nia’s lawyer, Marwan Porter. Nia was cleared of the charges several weeks later.

A spokeswoman for the Police Department declined to answer questions about the matter on Wednesday, referring instead to the statement the department issued last week. Ms. Davis, who is identified as “the mother of Victim #1” in the news release, “began cooperating” with the investigation on Dec. 21. That cooperation, the statement said, “caused investigators to apply for a subpoena for the I.P. addresses associated with the threatening messages.”

The authorities eventually determined that the messages were sent from an I.P. address that did not match the one on the device that Nia was using at the time.

Mr. Porter said at the news conference that the police account of events was inaccurate, and that “this was a joke of an investigation.”

“Our natural inclination is whatever they’re saying is the truth,” Mr. Porter went on to say, referring to the police. “Let me tell you, it’s not, in many situations.”

The lawsuit claims that “failure to promptly investigate this easily discoverable information by the Pembroke Pines police” forced Nia to remain in custody unnecessarily for 11 days, while Instagram’s refusal “to promptly provide or cooperate with the investigating officers” further prolonged the investigation.

Placing a young girl in handcuffs when a simple review of the Instagram accounts, messages and conversations would have revealed the truth, “shocks the conscience and is beyond the bounds of decency,” the lawsuit says.