The biggest question heading into Tuesday’s primaries was whether Democrats would be successful in guiding Republican voters to choose weak nominees for the general election.

In Illinois, Democrats’ biggest and most sustained investment succeeded, but in Colorado, Republicans chose candidates who didn’t have nominal primary support from across the aisle, setting up several general elections that are expected to be very competitive.

Elsewhere, far-right candidates remade Republican politics down the ballot in Illinois, while incumbents who aren’t facing ethics inquiries coasted to victories. And a special election in Nebraska was far closer than anyone expected.

Here are five takeaways from Tuesday’s contests across eight states.

Democrats have determined that it’s much easier to win a general election if you can handpick your opponent — especially if that opponent happens to be a far-right Republican who can easily be painted as an extremist.

So in Colorado and Illinois, they tried to help those sorts of candidates.

Such meddling isn’t a new phenomenon — it rose to prominence in the 2012 Missouri Senate race — but Democrats have used the risky strategy this year to prop up a series of underfunded far-right candidates running against Republican establishment favorites who were seen as a greater threat to Democrats in November.

On Tuesday, Democrats learned that it’s possible to elevate a flawed Republican if he already has a functioning campaign, but that they can’t make something out of nearly nothing.

In Illinois, Gov. J.B. Pritzker, the billionaire Democrat, spent $35 million to stop Mayor Richard C. Irvin of Aurora, a moderate Republican, while promoting Darren Bailey, a far-right state senator who once vowed to kick Chicago out of the state.

Mr. Bailey had been campaigning for more than a year and had his own billionaire patron, the conservative megadonor Richard Uihlein. Mr. Pritzker did such a good job stamping out Mr. Irvin that the mayor placed a distant third, more than 40 percentage points behind Mr. Bailey.

“Tonight, J.B. Pritzker won the Republican primary for governor here in Illinois,” Mr. Irvin said in a concession speech. “He spent a historic amount of money to choose his own Republican opponent, and I wish Darren Bailey well.”

But the same tactics didn’t work in Colorado, where a shadowy Democratic group spent nearly $4 million attacking Joe O’Dea, a construction executive who supports some abortion rights, while trying to aid Ron Hanks, a far-right state representative who didn’t spend anything on television advertising.

Mr. Hanks’s threadbare campaign raised just $124,000 — a pittance that in many places can barely pay for a competitive state legislative race. Democrats couldn’t help lift Mr. Hanks to victory if he couldn’t help himself.

Mr. O’Dea now figures to give Colorado Democrats what they feared: a competitive general-election contest against Senator Michael Bennet, who has privately told people his race will be difficult.

Not since Georgia’s elections over a month ago have Republican primary voters summarily rejected a slate of 2020 election deniers — but those contests were colored by former President Donald J. Trump’s failed quest for vengeance against Gov. Brian Kemp and Secretary of State Brad Raffensperger.

In two statewide races in Colorado, Republicans had a choice between a candidate who accepted the outcome of the 2020 election and one or more whose campaigns were animated by their rejection of the legitimacy of Joseph R. Biden Jr.’s victory.

In both cases, voters chose the candidate tethered to reality.

In the Senate race, Mr. O’Dea accepted the results of the election, while Mr. Hanks predicated his campaign on denying them. In a video announcing his campaign last year, Mr. Hanks shot a gun at what appeared to be a photocopier labeled as a Dominion voting machine.

And in the Republican primary for secretary of state, Tina Peters, the Mesa County clerk, who is under indictment in relation to a scheme to find evidence that the 2020 election was fraudulent, placed third in a contest in which she was the best-known candidate.

Ms. Peters and the second-place finisher, Mike O’Donnell, who has also promoted 2020 falsehoods, combined to win a majority of the vote, but both placed well behind Pam Anderson, a longtime local election official.

The Colorado races are hardly emblematic of Republican voters nationwide. In Illinois, Mr. Bailey and Representative Mary Miller, who both refused to accept the 2020 results, strolled to victory in their primaries. New York Republicans gave nearly two-thirds of their primary vote for governor to Representative Lee Zeldin and Andrew Giuliani, who have also cast doubt on the results.

Mr. Bailey, the newly minted Republican nominee for governor of Illinois, didn’t just trounce a field of better-funded candidates (with a lot of help from Mr. Pritzker). His coattails extended down the ballot to lift an array of like-minded conservatives.

Throughout Central and Southern Illinois, signs read “Trump-Bailey-Miller,” highlighting the alliance between the former president, Mr. Bailey and Ms. Miller. The congresswoman, who apologized last year after making an approving reference to Hitler, won her primary against Representative Rodney Davis after the two were drawn into a district together.

A few of Mr. Bailey’s picks in state legislative races defeated rivals backed by campaign cash from Kenneth Griffin, the Chicago billionaire and chief benefactor of the Illinois Republican Party.

One of Mr. Bailey’s chosen candidates for the Illinois House, Bill Hauter, a pediatric anesthesiologist at a hospital in Peoria, campaigned on a platform opposing public health restrictions to stem the coronavirus pandemic.

Early Wednesday, Dr. Hauter was up by double digits in his open-seat primary for a Central Illinois district against a candidate funded in part by millions of dollars Mr. Griffin spread across the state to support moderate, establishment-friendly candidates in down-ballot primaries.

“I’m up against a lot of money,” Dr. Hauter said in an interview at a Bailey campaign stop last week in Lincoln, Ill. “But money is not the motivation. It’s not message, it’s not supporters, it’s not enthusiasm. It’s not all these things that you need.”

It still requires special circumstances to oust an incumbent.

And in other states, several members of Congress who were thought to be endangered prevailed:

But there are lines voters won’t let candidates cross. Representative Steven Palazzo, a Mississippi Republican, lost a runoff after the Office of Congressional Ethics concluded he had misused campaign money, including directing $80,000 toward a waterfront home he was trying to sell.

In New York, Ms. Hochul was never believed to be in danger against her two challengers, one more liberal and one more conservative than she is.

But Mr. Delgado’s victory was less assured. He faced a robust challenge from Ana María Archila, a former immigrant rights activist who made her name confronting Senator Jeff Flake in a Senate elevator during the Supreme Court confirmation hearings for Justice Brett M. Kavanaugh.

Mr. Delgado, who joined Ms. Hochul’s administration in May after his predecessor resigned in scandal, still took about 60 percent of the vote in a three-way race.

Surprisingly close, but no cigar, for Nebraska Democrats.

Few outside the Cornhusker State paid much attention to the special election to fill the House seat vacated by former Representative Jeff Fortenberry, who resigned after he was convicted of lying to federal investigators. It was widely assumed that Mike Flood, a Republican state senator, would coast in Tuesday’s special election and again in November.

But the combination of a low-turnout contest, an under-the-radar effort from local Democrats and anger over the Supreme Court’s decision last week ending the constitutional right to an abortion led the Democrat in the race, State Senator Patty Pansing Brooks, to come within a few points of Mr. Flood in a district Mr. Trump carried by double digits in 2020.

“Nebraskans turned out to send a very loud and clear message that access to abortion services must be legal and protected,” said Jane Kleeb, the Nebraska Democratic Party chairwoman. “We can and will win in red states.”

Mr. Flood and Ms. Pansing Brooks will face off again in November, and the incumbent will again be a heavy favorite. 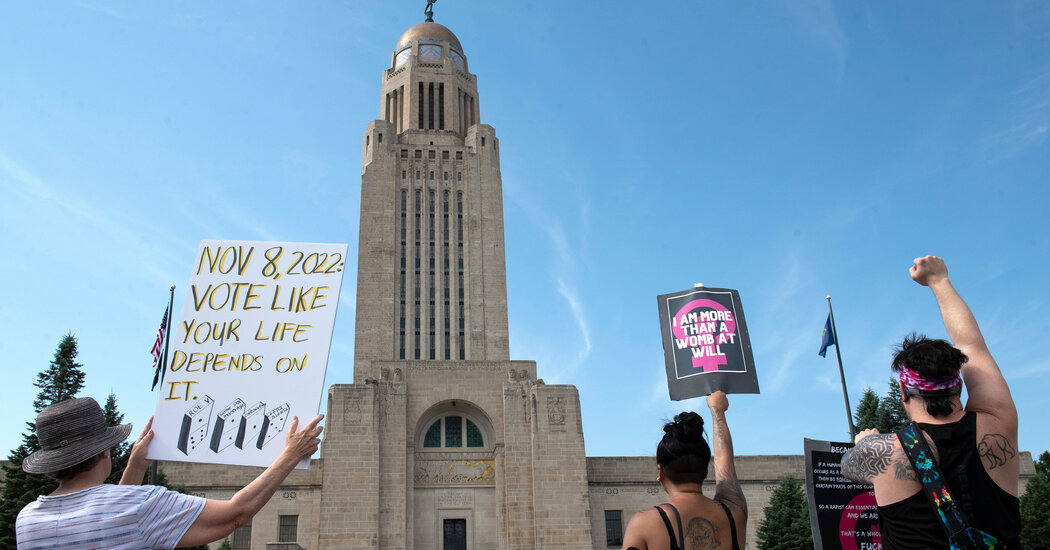