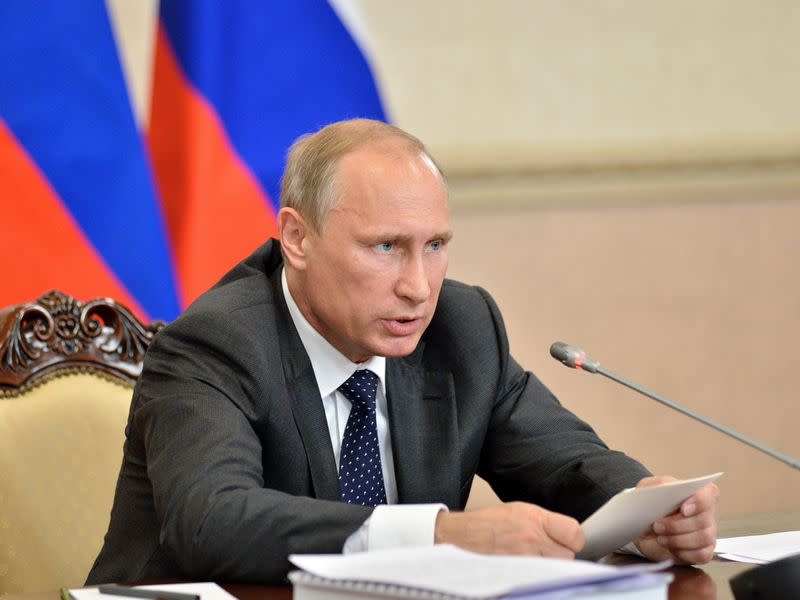 Market moves: Bitcoin and most major cryptos sank amid escalating tensions on the Russia-Ukraine border. A speech by Russian President Vladimir Putin drew the world closer to war.

Insights: Taiwan and Singapore are not stablecoin fans.

Technician’s take: Due to the U.S. Presidents Day holiday, Technician’s Take is on hiatus.

Catch the latest episodes of CoinDesk TV for insightful interviews with crypto industry leaders and analysis.

There are no gainers in CoinDesk 20 today.

Most major cryptocurrencies fell on Monday as a Russian invasion of the Ukraine loomed closer. In a televised address to his country, Russia President Vladimir Putin said he would recognize two pro-Russia breakaway republics in Eastern Ukraine and made a case for invading Ukraine, saying that the country’s pro-Western government was a threat to Russia.

Earlier in the day, a Kremlin spokesperson said that there were no “concrete plans” for a summit between Putin and U.S. President Joe Biden as some 150,000 Russian troops have reportedly inched nearer to the Ukraine border. In recent weeks, worried investors have been adopting more risk-averse strategies in anticipation of rising energy prices and sanctions by the U.S. and its European allies on Russia and Russian retaliation that will likely affect a global economy already hammered by inflation and supply chain delays.

Following Putin’s speech, the Biden administration announced penalties against the breakaway Ukraine republics. The per barrel price of brent crude oil jumped past $97, a nearly 4% spike.

At the time of publication, Bitcoin, the largest cryptocurrency by market capitalization, was trading trading at about $37,500, down over 3% for the previous 24 hours. Ether, the second largest crypto by market cap, was off about 1.6% over the same period. Other major cryptos were in negative numbers.

U.S. equity markets were closed for the national Presidents Day holiday, but leading European stock exchanges, including the FTSE 100, the DAX in Frankfurt and CAC 40 in Paris finished in the red. Most major Asian indexes also lost ground on Monday, including the Japan: Nikkei 225, the Hong Kong: Hang Seng and the Asia Dow.

‘’Such is the sensitivity on the financial markets right now, temporary confidence can evaporate rapidly and that’s what we’ve seen today after what appears to be another deterioration in relations between Russia and Western powers,” wrote Susannah Streeter, senior Investment and markets analyst for U.K.-based financial services firm Hargreaves Lansdown, in an email.

Not Every Currency Can be a Stablecoin

Stablecoins have been the best thing ever for the hegemony of the dollar, as the digitization of fiat currency into tokens overwhelmingly favors the greenback.

But as crypto is naturally home to dollar skeptics, certainly there must be a move to create stablecoins with alternative denominations. There’s a version of Tether denominated in Euros, and there are stablecoin projects denominated in Singapore’s dollar and Indonesia’s Rupiah, but these are three of the hundreds of currencies out there — certainly, there’s a demand for more, right?

The problem is that many smaller economies aren’t a huge fan of the internationalization of their currency and ceding control. There aren’t the right ingredients for a locally denominated stablecoin to take off in those countries.

Consider Taiwan. Over the weekend Leo Seewald, the former head of BlackRock Taiwan, and now a director at Taipei-based exchange MaiCoin, discussed its new Taiwan-dollar (TWD) stablecoin. The project’s webpage cites “reducing the capital cost of local and cross-border transactions without intermediary” as a benefit of the project.

But that goes against a pillar of Taiwan’s central bank’s monetary policy.

Taiwan has strict capital controls on its currency — exporting Taiwan dollars is strictly forbidden with few exceptions. The central bank doesn’t want the Taiwan dollar to be used offshore as the democratically run island’s arch-rival, China, could use an offshore TWD as a weapon by market-making an unofficial exchange rate through buying and dumping the currency at a disadvantageous price.

The central bank is also not a big fan of the Taiwan dollar being used to settle transactions that don’t have a direct nexus to Taiwan — something a stablecoin is specifically designed to do. Last year it handed down significant fines against Deutsche Bank, ING, and ANZ for letting commodity traders price grain contracts between Brazil, India, and other third countries in TWD despite the deal having no nexus to Taiwan. In theory, this won’t work because the currency can’t be exported off-island, but the banks used a synthetic proxy for the TWD — a forex instrument called a non-deliverable forward — to get around this.

And then there’s the export market. As an economy heavily reliant on exports it’d really sting if the local currency began to appreciate. Given the importance of Taiwan’s semiconductors, and the government’s usually balanced budgets, one would think the TWD would be headed towards the stratosphere. Not so, because of regular interventions in the FX market by the central bank to control the appreciation of the TWD. Very slow and steady wins the race, the bank believes.

The mother of all ironies is that Taiwan is deemed to be more of a currency manipulator than China because of lack of transparency on the issue; everyone knows that the RMB is pegged and only trades within a specific band.

Just don’t call Taiwan a currency manipulator. Or say they have capital controls. That gets central bankers and the diplomatic corps mad. In 2011, the governor of Taiwan’s central bank scolded reporters when addressed with the question. Foreign investors can buy equities, and move all the foreign currency they want through Taiwan, he said. Just don’t touch our precious TWD.

Stablecoins can throw a wrench in all of this.

A carefully managed currency from an export-driven economy with a geopolitical foe next door isn’t the best candidate to be deployed to the free-for-all that is the crypto market.

Pricing crypto contracts in TWD, or having it be used as a medium of settlement via digital asset on-ramps or off-ramps is going to blow away all the tenants of the Central Bank’s decades of policies and punishments.

The international grain market has nothing on crypto for volatility.

Singapore isn’t a huge fan of the internationalization of its currency either. As Singapore is a largely importing nation given its lack of natural resources it strives for exchange rate stability and doesn’t want international deals with no nexus to the country priced in its currency. Denominate that in USD, please.

But for stablecoins to get on the radar of these respective banks, they need to be bigger first. A lot bigger. Currently, the TWDC has minted 7.8 million Taiwan dollars of its tokens, or around $283,000; Singapore’s xSGD is further along with a market cap of $185 million. Far from enough to complement the currency (the kind that Bloomberg’s Mike McGlone argues Tether is to the dollar), but also far from enough to be the threat to the economy that the White House claims stablecoins are.

Asia is going to be trading in USD-denominated stablecoins for the foreseeable future. And that’s a feature, not a bug.

Due to the U.S. Presidents Day holiday, Technician’s Take is on hiatus.

In case you missed it, here is the most recent episode of The Hash on CoinDesk TV:

Ukraine Update: Putin Recognizes Two Breakaway Regions, Biden Responds With Sanctions: The increase in tension on Monday sent U.S. stock index futures to session lows and bitcoin back towards the bottom of its recent price range.

FTX Starts Gaming Unit to Promote Crypto Adoption: Report: “There are 2 billion plus gamers in the world who have played with and collected digital items, and can now also own them.”

Making Sense of India’s New Crypto Rules: India’s first concrete steps in acknowledging crypto may be here to stay, having spurred both excitement and confusion over whether the country is approving crypto as an asset.

Other voices: What’s at Stake for the Global Economy if Russia Invades Ukraine

“Russia is incredibly unimportant in the global economy except for oil and gas. It’s basically a big gas station.” (Harvard economist and former President Obama advisor Jason Furman to The New York Times) … “As for those who captured and are holding on to power in Kyiv: We demand that they immediately cease military action. If not, the complete responsibility for the possibility of a continuation of bloodshed will be fully and wholly on the conscience of the regime ruling the territory of Ukraine.” (Vladimir Putin in a televised address) … Ethereum politics is still essentially a capitalist framework, as speaker Abbey Titcomb of Radicle emphasized. But what separates Ethereum politics from the type of hyper-capitalist libertarianism often advocated by bitcoiners is a clear-eyed acceptance that markets as currently structured fail, again and again, in predictable and well-understood ways and need both restructuring and supplementing.” (CoinDesk columnist David Z. Morris)