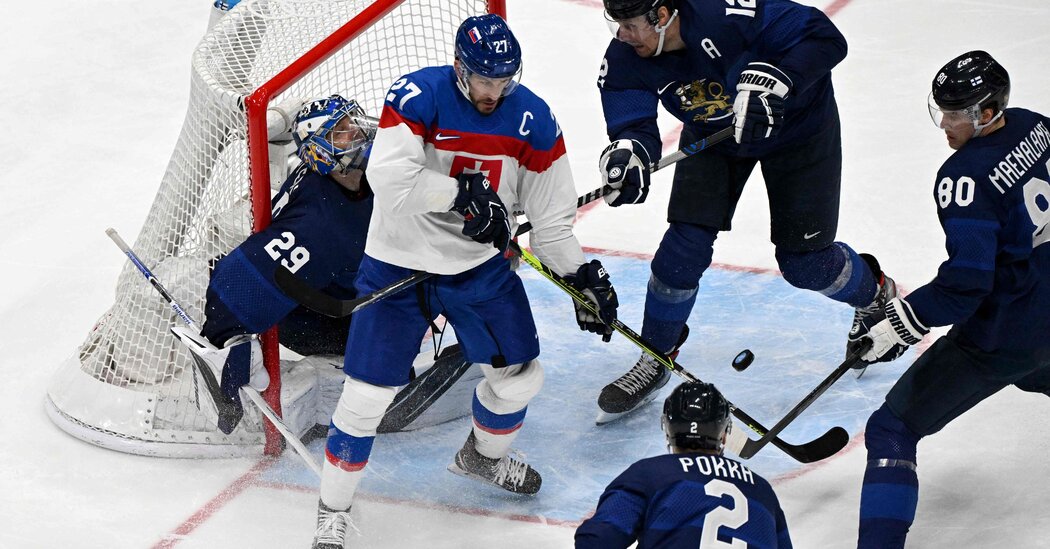 It took 60 minutes of regulation play, 10 minutes of overtime and 17 attempts in a shootout, but Russia’s team on Friday locked down a chance to win a second straight gold medal in men’s hockey at the Olympics.

The Russians defeated Sweden, 2-1, after a grinding shootout and clinched a berth in Sunday’s men’s hockey tournament final. The Russians will play Finland, which beat Slovakia, 2-0, earlier in the day.

Plenty of games in Beijing have lacked theatrics or chaos. Then came the meeting between the Swedes and the Russians.

The Russian team picked up a goal early in the second period off the stick of Anton Slepyshev, a forward playing in his first Olympics. Sweden evened the score with a shot from Anton Lander in the opening minutes of the third — enough, it would turn out, to vault the game into overtime.

But overtime did not yield a game-winning goal, leading the teams to the agony and nerves of a shootout.

There were saves, misses, a lost puck and even some goals. It was only on the 17th try of the shootout, though, that Arseni Gritsyuk flicked the puck into the net for the goal that sealed the Russian victory and stirred a swarm of men in red jerseys onto the ice at National Indoor Stadium.

“Honestly, it was really nerve-racking,” said Mikhail Grigorenko, a Russian forward. But he added that he was not surprised by the closeness of the contest.

“We knew it was not going to be a high-scoring game,” he said.

The day’s first semifinal offered far less suspense. But by the end of the weekend, Finland and Slovakia will have, at the very least, matched their best showings in Olympic men’s hockey.

The Finns, who have won two silver medals in the sport but never captured an Olympic title, got the lone goal they needed to advance in the first period, when Sakari Manninen scored about four minutes before the intermission.

“We get a shot from the blue line, guys in front of the net, little tips, and then there is a rebound, and then there’s always a dangerous chance to score,” Manninen said.

The Slovak team, which beat the top-seeded U.S. squad on Wednesday, could earn its first Olympic medal in men’s hockey when it plays for bronze on Saturday. It did not surrender the second score until less than a minute remained in the game and after it had pulled its goalie.

“We had them under a lot of pressure but could not score,” said Marek Hrivik, the Slovak forward whose late goal on Wednesday forced the quarterfinal game against the Americans to overtime.