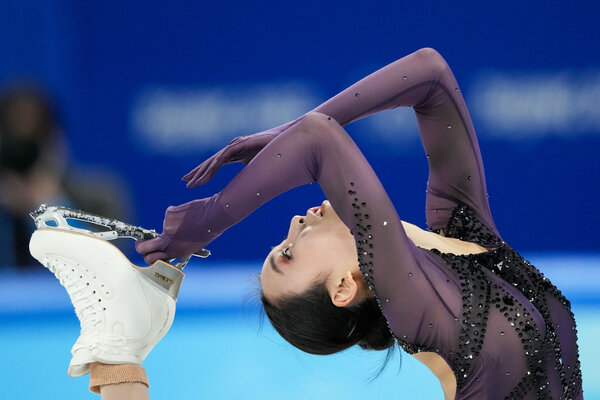 Mariah Bell had been waiting for her turn to skate in Beijing.

She wasn’t chosen for the team event, and the U.S. team won silver last week. Then Nathan Chen, one of her training partners in California, won gold in the men’s event. For all of those performances, she was just a fan in the crowd, cheering on her teammates.

Finally, in the short program on Tuesday, Bell, the reigning U.S. national champion, got her chance to do what she came here for.

While she fell on the second jump of her triple-triple combination, she quickly composed herself to float nicely through the rest of her program. For once, she had a cheering section of her own: A raucous, though tiny, group of fans at one end of the arena screamed her name as she stepped off the ice. She scored 65.38 points to end up the best in her group and second overall.

The last skater of the group was Beverly Zhu, a 19-year-old who was born and raised in the United States but is skating for China as Zhu Yi. It’s hard to imagine how much pressure she must have felt.

After she fell in the short program of the team event, the hashtag #ZhuYiFellDown was viewed more than 200 million times on Weibo, a popular Chinese social media platform, as commenters called her “shameless,” “rotten” and an “embarrassment.” But on Tuesday, the fans gave her a warm round of cheers and shouted, “Go!” in Chinese.

On her first jump, she nicked the ice with her skate after landing, but managed to power through the rest of her skate, growing more confident as her program unfolded. Most of the crowd applauded and waved Chinese flags afterward.

Waiting for her score, she breathed deeply and sat perfectly still. To finish out the group, she was given 53.44 points, for ninth place overall.