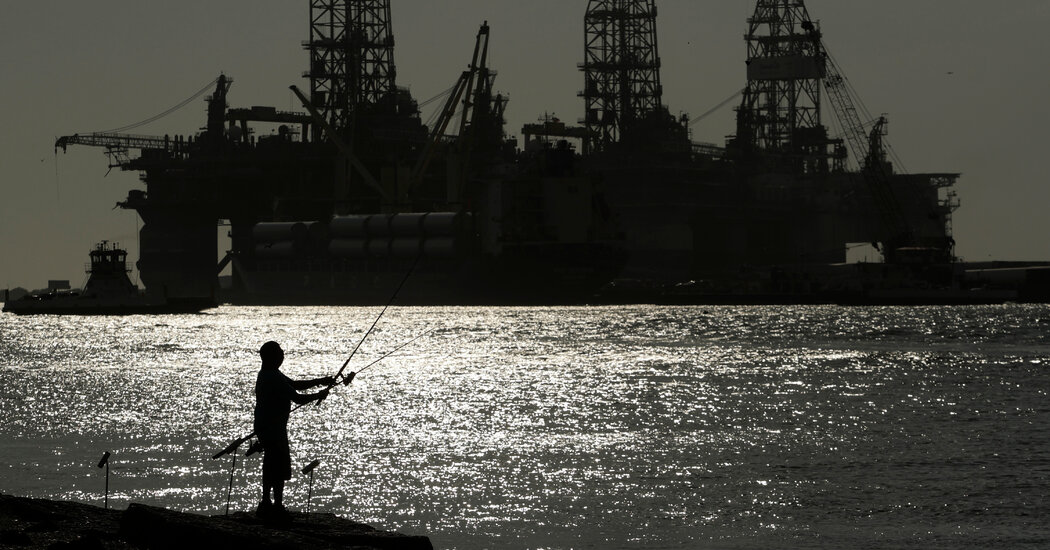 WASHINGTON — A federal judge on Thursday canceled oil and gas leases of more than 80 million acres in the Gulf of Mexico, ruling that the Biden administration did not sufficiently take climate change into account when it auctioned the leases late last year.

The decision by the United States District Court for the District of Columbia is a major victory for environmental groups that criticized the Biden administration for holding the sale after promising to move the country away from fossil fuels. It had been the largest lease sale in United States history.

Now the Interior Department must conduct a new environmental analysis that accounts for the greenhouse gas emissions that would result from the eventual development and production of the leases. After that, the agency will have to decide whether it will hold a new auction.

“This is huge,” said Brettny Hardy, a senior attorney for Earthjustice, one of several environmental groups that brought the lawsuit.

“This requires the bureau to go back to the drawing board and actually consider the climate costs before it offers these leases for sale, and that’s really significant,” Ms. Hardy said, adding, “Once these leases are issued, there’s development that’s potentially locked in for decades to come that is going to hurt our global climate.”

Melissa Schwartz, a spokeswoman for the Interior Department, said the agency was reviewing the decision.

As a candidate, Mr. Biden promised to stop issuing new leases for drilling on public lands and in federal waters. “And by the way, no more drilling on federal lands, period. Period, period, period,” Mr. Biden told voters in New Hampshire in February 2020. Shortly after taking office, he signed an executive order to pause the issuing of new leases.

But after Republican attorneys general from 13 states sued, a federal judge in Louisiana blocked that order, and also ruled that the administration must hold lease sales in the Gulf that had already been scheduled.

Biden administration officials have said Interior Secretary Deb Haaland risked being held in contempt of court if the auction was not held. Environmental groups, however, argued that the administration had other options, including doing a new analysis to examine the ways that the burning of oil extracted from the Gulf would contribute to climate change.

The lawsuit alleged that the Interior Department relied on an outdated environmental analysis conducted by the Trump administration that concluded additional drilling in the Gulf would not increase greenhouse gas emissions. The environmental groups said that analysis did not consider new information about the impact of offshore drilling on rising global temperatures.

Scott Lauermann, a spokesman for the American Petroleum Institute, which represents oil and gas companies, said in a statement: “We are reviewing this disappointing decision and considering our options. Offshore energy development plays a critical role in strengthening our nation’s economy and energy security.”

Companies had argued to the court that vacating the lease sale would compromise the confidential bids that were submitted for the tracts, making their competitors aware of who was bidding on what, and for how much.

Shell, BP, Chevron and Exxon Mobil offered $192 million for the rights to drill in about 1.7 million acres in the area offered by the government. Though the sale occurred on Nov. 17, the leases have not yet been issued.

Hitting a wall. With the Build Back Better Act hitting a wall in Congress, some Democrats want to forge ahead with a stand-alone climate bill. But their solution could mean abandoning other parts of President Biden’s agenda.

Judge Rudolph Contreras said in his ruling that the Interior Department “acted arbitrarily and capriciously in excluding foreign consumption from their greenhouse gas emissions” and that it was required to do so under the 1970 National Environmental Policy Act, or NEPA, which says the government must consider ecological damage when deciding whether to permit drilling and construction projects.

Any disruptions that revoking the lease sales might cause, he wrote, “do not outweigh the seriousness of the NEPA error in this case and the need for the agency to get it right.”

Drilling for gas and oil on public lands and federal waters account for about 25 percent of the nation’s greenhouse gas emissions. But despite its bold promises, the Biden administration has moved cautiously over the past year on whether to restrict drilling. With gas prices rising and Republicans eager to blame the administration, environmental activists have accused the administration of sacrificing aggressive action for political expediency.

In November, for example, the Interior department issued a long-awaited report that was supposed to determine the future of federal oil and gas leasing. It skirted the question of ending the practice and instead recommended the government charge companies higher rates to drill.

Oil industry executives said Thursday they are counting on the Biden administration to appeal the court ruling. “At a time of geopolitical uncertainty and rapidly rising energy prices, U.S. oil and gas production is more important than ever to curb inflation and to fortify our national security,” Erik Milito, president of the National Ocean Industries Association, which represents offshore energy companies, said in a statement.

Environmental groups said they want the administration to live up to its campaign promises. “We will continue to hold the Biden administration accountable for making unlawful decisions that contradict its pledge to take swift, urgent action on code red climate and environmental justice priorities,” said Hallie Templeton, legal director at Friends of the Earth, an environmental group that was part of the lawsuit.