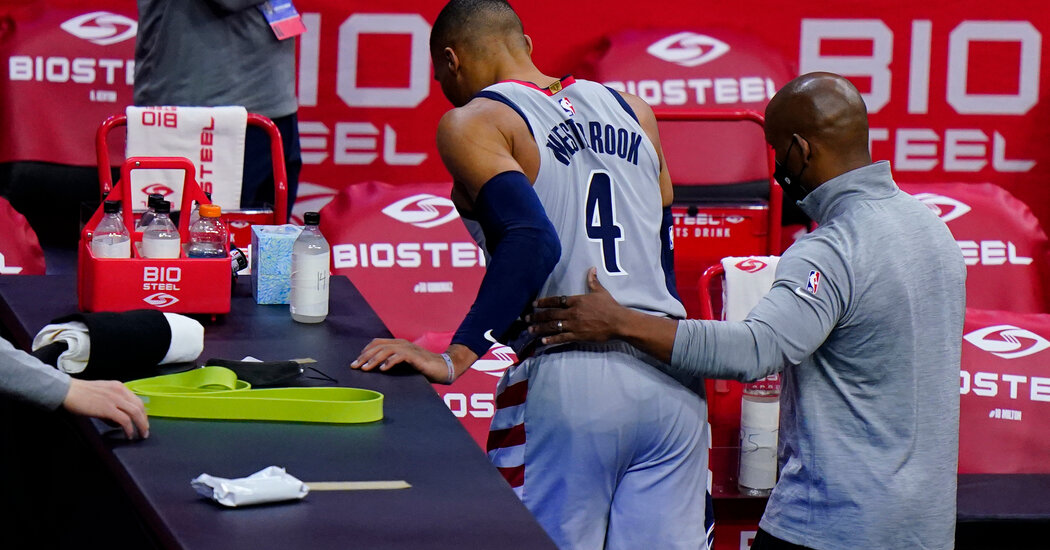 The Philadelphia 76ers announced {that a} fan who poured popcorn on Washington Wizards guard Russell Westbrook as he departed the courtroom after an damage at Wells Fargo Center can have his season tickets revoked and is barred indefinitely from the sector.

The incident occurred after Westbrook injured his ankle within the fourth quarter of the Wizards’ Game 2 loss to the 76ers on Wednesday. The fan was ejected by area safety.

“There are certain things that cross the line,” Westbrook instructed reporters after the sport. “In these arenas, you got to start protecting the players. We’ll see what the N.B.A. does.”

On Thursday, the N.B.A. mentioned in an announcement: “The return of more N.B.A. fans to our arenas has brought great excitement and energy to the start of the playoffs, but it is critical that we all show respect for players, officials and our fellow fans. An enhanced fan code of conduct will be vigorously enforced in order to ensure a safe and respectful environment for all involved.”

Players throughout the league voiced frustration over the incident. “By the way WE AS THE PLAYERS wanna see who threw that popcorn on Russ while he was leaving the game tonight with a injury!!” Los Angeles Lakers ahead LeBron James tweeted. “There’s cameras all over arenas so there’s no excuse!”

Westbrook mentioned that he had realized to look the opposite manner throughout most instances of fan vitriol, however that the state of affairs was worsening. Three years in the past, the Jazz barred a fan in Utah for, the staff mentioned, “excessive and derogatory verbal abuse directed at a player.” Westbrook, who’s Black, mentioned that fan, who seemed to be white, made “disrespectful” and “racial” feedback.