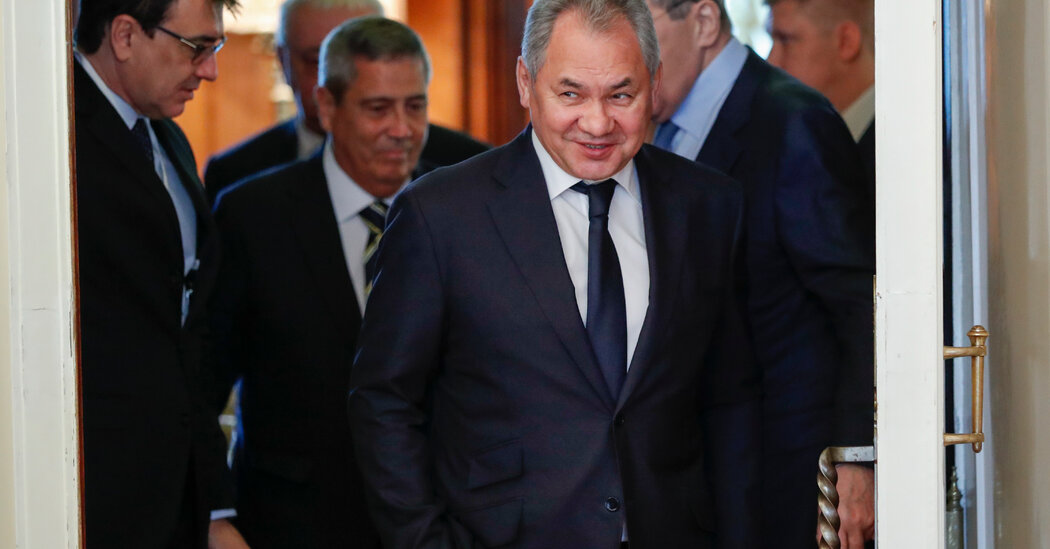 BRUSSELS — The list included some of the Kremlin’s highest ranking officials, the top Russian military leadership, senior bank executives, a prominent news anchor, the head of a global television network and a Russian businessman with links to a mercenary group.

For years, as part of the circles of power that surround President Vladimir V. Putin of Russia, many have enjoyed lavish lifestyles — villas on Lake Como in Italy, jetting to see children living in European capitals, shopping on the Continent’s glitziest boulevards.

On Wednesday, the European Union took aim at them with an array of sanctions.

E.U. officials said the bloc’s nearly 600-page list of penalties — including travel bans and asset freezes — was just a first step, punishing those involved in the recognition on Monday of the so-called republics of Donetsk and Luhansk, which the bloc regards as a violation of Ukraine’s territorial integrity. They promised heavier penalties if Russia escalates its hostilities in Ukraine into a full-blown invasion.

They also banned Russia from raising funds in European capital markets through short- and long-term bonds.

In Washington, President Biden stepped up sanctions as well, a day after blocking two large Russian financial institutions from Western finance and limiting Russia’s access to debt markets. He said the new measure was aimed at a subsidiary of Gazprom, the Russian energy giant, which built the Nord Stream 2 gas pipeline from Russia to Germany. On Tuesday, Germany halted certification of the pipeline.

Prime Minister Boris Johnson of Britain imposed travel bans on three wealthy Russians — Gennady Timchenko and Boris and Igor Rotenberg — and said that any British assets they hold in the country would be frozen.

Overall, while the sanctions affected some of the most important people around Mr. Putin, and the state’s access to debt markets, they stopped well short of stronger measures that could hurt not just average Russians but also Europeans, who could be affected by rising energy prices, among other things. And in recent years Mr. Putin has bolstered Russia’s ability to withstand sanctions, reducing its use of dollars, stockpiling currency reserves and reorienting trade away from Western imports.

Still, experts said the European measures were impressive for having been introduced so quickly and uncharacteristically smoothly, were well coordinated with steps in Washington and were emblematic of the bloc’s willingness to tighten the vise on Mr. Putin and those around him.

The West has made clear that more sanctions could be coming.

“This is just a starting point,” said John Bedford, a partner at the law firm Dechert LLP. “I expect a lot of these people will not have significant financial interests in the E.U., so sanctions won’t bite directly. It’s not the big name oligarchs, whether because they’re holding them for later or because there isn’t appetite to put them on the list at this stage.”

The E.U. list reached inside the concentric circles around Mr. Putin, even touching his inner sanctum, by imposing penalties on his defense minister, Sergei K. Shoigu, and the president’s chief of staff, Anton Vaino.

Among the people targeted were more than 300 Russian lawmakers who voted to support Mr. Putin’s decision to recognize the so-called republics, and individuals the Europeans described as “propagandists” for the move.

Those included well-known voices defending Russia’s positions and promoting the independence of the enclaves, such as Maria Zakharova, the spokesman for the Foreign Ministry; Margarita Simonyan, who leads the Kremlin-funded, globally broadcasting television network RT; and Vladimir Solovyov, a prominent television anchor.

The top Russian military leadership and senior executives at the state-owned VTB Bank, which itself was not listed, featured in the sanctions package.

Yevgeny Prigozhin — a Russian businessman with close ties to Mr. Putin who is linked to the mercenary group Wagner — was included along with two members of his family.

Some experts noted that some on the E.U. list, like Mr. Prigozhin, were already under previous sanctions, and wondered if many of the people or entities listed would be gravely impacted by the additional penalties. But Western officials hoped the measures would strike at the lifestyles of Russia’s highest officials and make it difficult for Mr. Putin by making those around him unhappy.

The sanctions mean that the individuals will be barred from traveling to the European Union and their assets will be frozen — although the asset freezes could be tricky to carry out, given the willingness of European banking systems to conceal wealth in complex ownership structures.

The restrictions on raising money in European capital markets could be the most painful part of the European penalties.

“I think the debt and equity prohibitions are by far the strongest part of the E.U.’s package,” said Julia Friedlander, director of the Economic Statecraft Initiative at the Atlantic Council.

“This is what the U.S. also did Tuesday, but is a bolder move on the part of the E.U., because Russia has been shifting away from holding U.S. dollars and raising U.S.-dollar-denominated debt since 2014” in favor of the euro, she added.

Understand How the Ukraine Crisis Developed

Failed diplomatic efforts. The United States, NATO and Russia have been engaged in a whirlwind of diplomacy to prevent an escalation of the conflict. In December, Russia put forth a set of demands, including a guarantee that Ukraine would never join NATO. The West dismissed those demands and threatened economic consequences.

The European Union chose to target certain individuals it could directly link to the narrow decision to recognize Luhansk and Donetsk — a step designed to make it easier to reach a consensus, given that E.U. sanctions need unanimous approval. The penalties, while only a preliminary step, are likely to amount more to inconvenience, a change in lifestyle, perhaps, than to real financial pain.

Mr. Solovyov, for example, the television anchor who is described by the sanctions documents as “a Propagandist,” has publicly boasted about owning a house near Lake Como. The 900-square meter, three-story mansion near the lake features a large pool and a garden, was valued in 2016 over 5.6 million euros, about $6.3 million.

Such cases of opulence might garner attention, highlighting the vast difference in lifestyle between ordinary Russians and the elites, but real pain for Mr. Putin’s closest allies will be dished out in the bigger, more painful sanctions being negotiated in the event that Russia fully invades Ukraine.

The talks over those measures remain difficult, because heavier sanctions on Russia will also hurt European countries that can ill-afford the hit as they struggle to recover from the pandemic.

Diplomats participating in the negotiations said that apart from Hungary, whose president Viktor Orban, is an admirer of Mr. Putin, and which only reluctantly agreed to the first set of sanctions, other member states are mostly amenable to more severe penalties. But many have been asking for exceptions to protect commercial interests.

European Union leaders are set to meet in Brussels Thursday for an emergency meeting to grapple with these differences, and diplomats said no one was prepared to appear hesitant in the face of an invasion, so a compromise would have to be reached urgently.

A few European countries are bracing for impact in their banking sectors. Italy has been arguing for narrower sanctions that omit major crackdowns on Russian banks, as has Austria, whose Raiffeisen Bank International maintains hundreds of branches in Russia, diplomats said.

And there were more niche concerns, too. Italy would like to see luxury goods excluded from the new sanctions package so as to maintain exports of the Russian elite’s favorite fashion items. Belgium, home of Antwerp, Europe’s largest diamond center, has been pushing for gemstones to be excluded.

These types of indulgences, favorites among Russian elites and important for the European countries that export them, were highlighted in a rare caustic tweet Tuesday by Josep Borrell Fontelles, the bloc’s foreign policy chief boasting about the E.U.’s measures.

“No more: Shopping in Milano Partying in Saint Tropez Diamonds in Antwerp,” he wrote.

Reporting was contributed by Steven Erlanger from Munich, Oleg Matsnev from Moscow, Stephen Castle from London, Patricia Cohen from New York and Gaia Pianigiani from Rome.