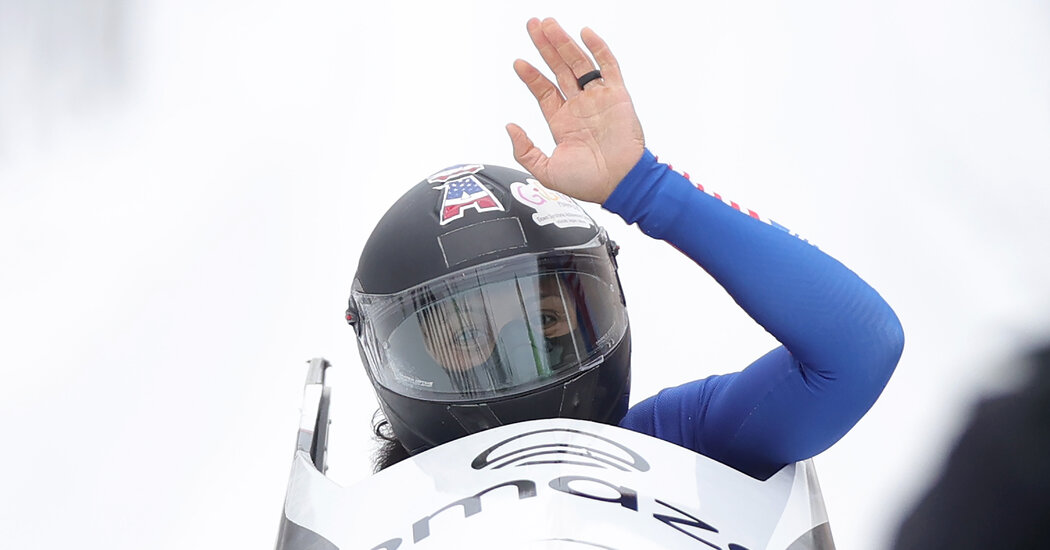 Elana Meyers Taylor, a three-time Olympic medalist and one of the most decorated American bobsledders in history, said Tuesday that she had tested positive for the coronavirus shortly after arriving in Beijing for the Winter Olympics.

Meyers Taylor revealed her positive test in a post on Instagram, writing that she had tested positive on Saturday, two days after arriving in China with her husband, an alternate on the U.S. men’s team, and their young son. Now in isolation, she must return two negative test results to be released, and to compete.

“I am asymptomatic and currently at an isolation hotel — and yes I am completely isolated,” she wrote. “Getting to the Olympics is never easy, and this time, as a new mom, it has been the most challenging, but also, incredibly rewarding, to be able to show that it can still be done.”

Meyers Taylor, 37, is at least the second U.S. bobsledder to test positive in recent days. Josh Williamson, a member of the men’s two-man and four-man sleds, tested positive last week, part of what has been reported to be a larger outbreak involving coaches and others close to the team. He, too, hopes to be cleared in time to compete. “This has not been an easy pill to swallow,” he wrote of missing the chance to accompany his teammates to China.

Williamson was the first American Olympian to test positive as part of the team’s official departure for the Winter Games.

Meyers Taylor, who won a bronze medal in the two-woman event at the 2010 Games and silvers in 2014 and 2018, was expected to contend for a medal at her fourth consecutive Olympics. Her hopes of competing might be helped by the schedule: The two-women event is among the last of the Games, and will not begin heats until Feb. 18. Meyers Taylor is currently ranked first in the world in the event, and in the new women’s monobob competition that will make its Olympics debut in Beijing.

“This is just the latest obstacle that my family and I have faced on this journey, so I’m remaining optimistic that I’ll be able to recover quickly and still have the opportunity to compete,” Meyers Taylor said.

The Beijing Olympics open on Friday, but Meyers Taylor joined a group of athletes — and at least one International Olympic Committee member — whose participation has been jeopardized by positive tests for the virus in the final days before the Games.

The athletes’ positives came across a variety of sports and affected competitors from at least a half-dozen countries. The I.O.C. member who tested positive, Emma Terho of Finland, announced her result on Instagram but said she would continue her work remotely while in isolation. Terho serves as chair of the I.O.C.’s Athletes’ Commission.

A few of those who tested positive have said they will miss the Games entirely. A handful of other competitors and teams, though, continued to test, in the hope that they might record the negative tests required to compete.

Among the latest cases: