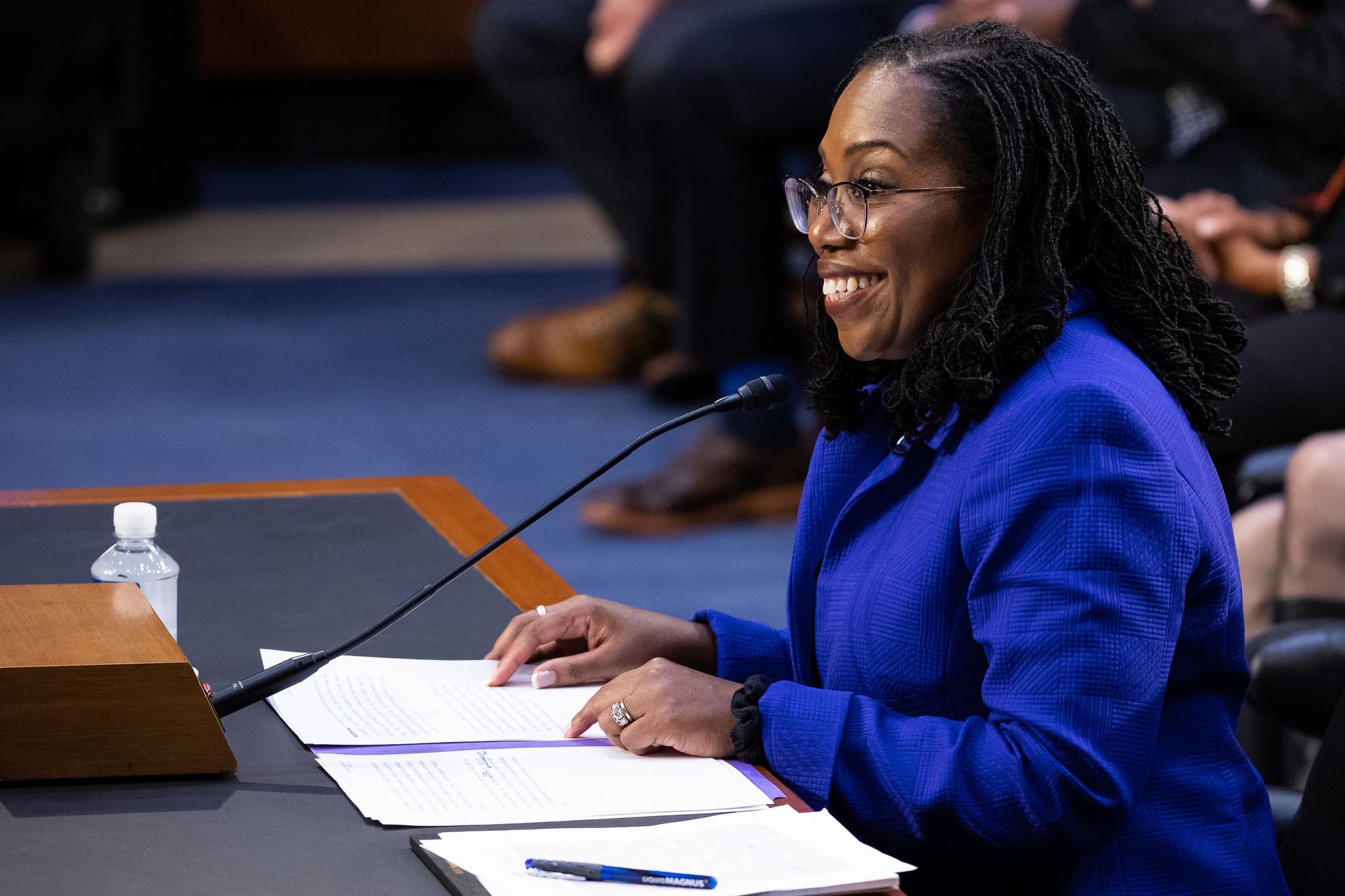 “I honestly don’t know that much about them,” said Sen. Cory Booker (D-N.J.), a member of the Senate Judiciary Committee. “If you pick the ACLU, or the [Center for American Progress] those are groups that we’ve worked with. They’re not to us what the Heritage Foundation and the Federalist Society are to” Republicans.

Republicans are focusing on Demand Justice as they plan to grill Jackson on whether she supports adding seats to the high court, a question White House officials have made clear she does not plan to answer. Following the first day of her confirmation hearings, Sen. Doug Jones (D-Ala.) reiterated that adding seats to the Supreme Court is a policy issue and highlighted that previous nominees, including Justice Amy Coney Barrett, declined to opine on the matter. Republicans counter that Justices Ruth Bader Ginsburg and Stephen Breyer publicly opposed adding seats to the court.

For Demand Justice’s executive director, Brian Fallon, the questions about his group are a “badge of honor.” And despite Senate Democrats downplaying its influence, Fallon didn’t hesitate to liken Demand Justice as a counter to conservative groups, including the Judicial Crisis Network.

“It’s obviously hypocritical for [Republicans] to complain about advocacy groups on the left when all we’re trying to do is catch up to the network of groups that have long been active on the right for the last 40 years,” Fallon said in an interview. “But I don’t think it’s successfully done anything to derail or put into question the confirmation prospects for any of the Biden nominees over the last year including Ketanji Brown Jackson.”

“They call for expanding the Supreme court, for expanding lower courts,” Tillis said. “The question in my mind, as I’m trying to get my own theme around judicial philosophy … Is just the basic question: ‘why are they all in?’ Because they’re very much driven by their priorities. And I’m trying to figure out what that nexus might be.”

Republicans and Democrats alike have criticized the use of “dark money” to push for Supreme Court confirmations. The Judicial Crisis Network, a conservative judicial group, took out millions of dollars in ad buys to push for the confirmations of Justices Neil Gorsuch, Brett Kavanaugh and Amy Coney Barrett. Demand Justice previously took out ads opposing Barrett’s and Kavanaugh’s confirmations and recently announced a $1 million ad buy shortly after Biden nominated Jackson.

Fallon said the group’s support for Jackson is motivated by a broader push for Democrats to prioritize judicial nominees with diverse professional backgrounds, including public defenders.

Durbin suggested Monday that Democrats were ready to counter Republican attacks, telling Jackson “there may be others who allege that you are before us today as the product of a campaign led by dark money groups. … Your record — and the process that led to your nomination — belie such claims.”

He said after the hearing that while he knows some of the staff at Demand Justice, “I really don’t know their strategy.”

Democrats argue that if Republicans are concerned about “dark money,” they should sign on to legislation that would disclose the names of donors to organizations to a wide array of political nonprofits. Republicans, however, have said such laws would infringe on free speech and freedom of assembly.

“Count us as the many people on the Democratic side that would be willing to make a deal with Republicans,” Fallon said. “But until that time, we’re not going to unilaterally disarm. In fact, the fact that we’ve been sitting this out for so long is a big reason we have a 6-3 court right now.”