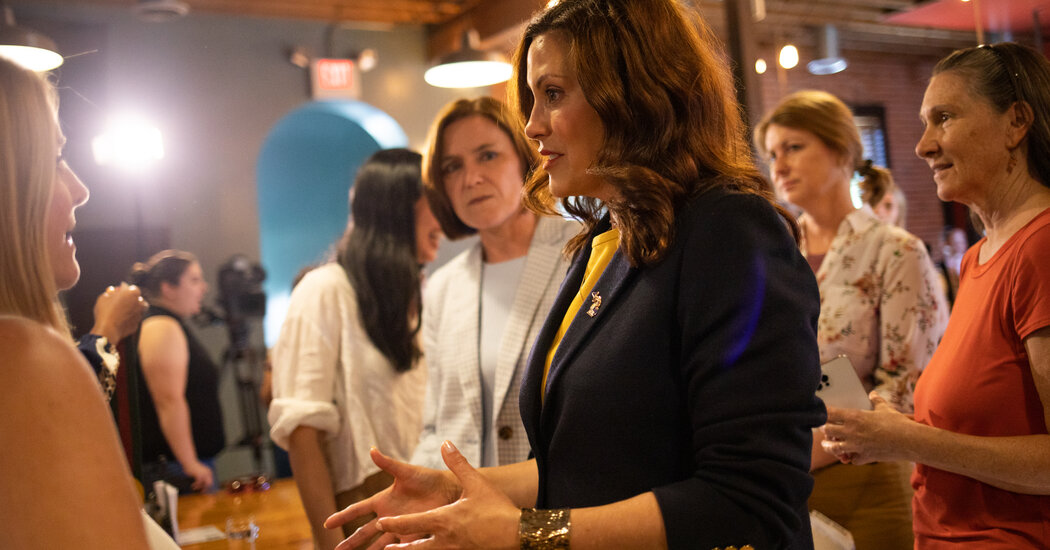 Democrats in some of the most competitive races for Senate and governor this year instantly appealed to donors on Friday after the Supreme Court overturned 50 years of precedent on abortion rights.

Their fund-raising blasts filled email boxes and social media feeds as they aimed to capitalize on the fear and alarm that many left-leaning voters felt — not just for the loss of the constitutional right to abortion, but at the rightward lurch of the court with three Trump-appointed conservative justices.

A countervailing, though seemingly smaller, push by Republicans sought donations by raising the prospect that Democrats in Congress would seek to codify abortion rights and erase the decades-in-the-making conservative victory in the courts.

On the Democratic fund-raising platform ActBlue, donors gave nearly $6 million in the first few hours after the 6-to-3 Supreme Court decision came down — a huge sum, but still a fraction of what flowed in from donors in 2020 after Justice Ruth Bader Ginsburg died, when a record $6.2 million was donated in the first hour.

“I’m sure you’re angry, frustrated, and scared about what this means. I am too,” Josh Shapiro, a Democrat who is running for governor of Pennsylvania, wrote to potential donors, pledging to veto any abortion bans passed by the state’s Republican-led legislature.

His competitor, the Republican Doug Mastriano, has vowed to make abortion illegal in the state and said on Friday that “as the abortion debate returns to the states, Pennsylvania must be prepared to lead the nation in being a voice for the voiceless.”

An incumbent Democrat, Gov. Gretchen Whitmer of Michigan, who has gone to state court to block a 1931 abortion ban from snapping back into effect, wrote to supporters that she was opposed by “a slew of opponents” in the Republican primary “who want Michigan’s abortion ban to stay in place.”

Representative Tim Ryan of Ohio, a Democrat who is running for Senate, wrote in an email to donors: “My opponent J.D. Vance called overturning Roe a ‘victory’ and said pregnancy from rape is merely ‘inconvenient.’ It’s disgusting. I’m disgusted, angry, and scared for my kids.” Mr. Vance said in a statement that “we now enter a new phase of the pro-life movement,” and he vowed to “continue the fight.”

A number of Democratic Senate candidates, both incumbents and those like Mr. Ryan who are hoping to capture Republican-held open seats, pleaded to keep Democratic control of the Senate to block any Republican effort to ban abortion nationally.

“With Roe gone, the Senate is our last line of defense to stop extremists from pushing a national abortion ban,” wrote Senator Catherine Cortez Masto of Nevada, who is in a fierce battle with Adam Laxalt, the Republican challenger.

In North Carolina, the Democratic Senate nominee, Cheri Beasley, wrote that “my opponent” supports “banning abortions with zero exceptions,” and added, “Donate to my campaign to keep him far away from the Senate.”

Ms. Beasley’s opponent, Representative Ted Budd, had a fund-raising message of his own, attacking Congressional Democrats’ efforts to codify Roe in federal law, which failed a test vote in the Senate in May.

“Today is a great day for the unborn, thanks to the prayers and hard work of many people to ensure constitutional justices are on our Supreme Court!” Mr. Budd wrote. He added that “unfortunately, we now face the outrage of radical abortion activists,” warning that “they’re going to try their hardest to fund-raise, mobilize, and take down pro-lifers — we have to fight back too.”

Indeed, many Democrats hope the reversal of Roe will galvanize the party’s voters during a year in which the political climate is unfavorable for the left.

A Republican congressman, Representative Darin LaHood of Illinois, sought to generate donations by pointing to the possibility of a Democratic wave of anger.

“Democrats have promised a ‘WHIRLWIND’ of backlash as they scramble to cement Roe v. Wade into law,” he wrote. “We can’t let them destroy decades of work by the pro-life movement.”