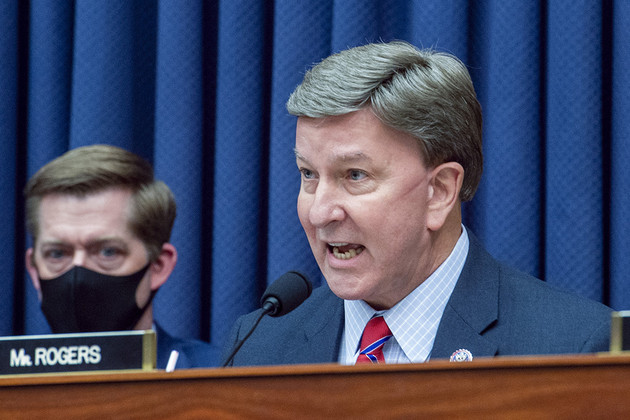 Biden is seeking a $30 billion boost from the current year that would push overall national defense spending to $813 billion. Despite the hefty increase, Republicans are already putting pressure on Democrats to ladle billions more on top of that once Congress starts going through the budget.

That’s what happened last year, when Republicans and Democrats on the House and Senate Armed Services Committees put aside Biden’s lower Pentagon budget request and drove defense spending higher. But the calculus is complicated by the eye-popping size of the request, high inflation, the unfolding response to Russia’s invasion of Ukraine and looming midterm elections.

Armed Services Republicans, led by Rep. Mike Rogers of Alabama and Sen. Jim Inhofe of Oklahoma, are pushing for a 5 percent increase to defense spending above the rate of inflation and are again counting on enough Democrats to take their side. With the rate of inflation near 8 percent, such a boost could bring the current $743 billion Pentagon budget to well above $800 billion, though Republicans haven’t named a specific figure.

Rogers told POLITICO that last year’s bipartisan vote to increase the defense bill by $25 billion above Biden’s request “will be a good example of how it’s going to play out.”

“Probably looks a lot like last time,” added Rep. Jim Banks (R-Ind.), an Armed Services member who chairs the conservative Republican Study Committee. “Biden lowballs it and Republicans push for a much-needed increase, and the way things are going around the world, Democrats get on board because they realize that we don’t have a choice.”

GOP defense hawks are in lockstep on the push for more military spending to outpace inflation and match challenges posed by China and Russia. All 28 House Armed Services Republicans slammed Biden’s Pentagon budget Monday in a coordinated press release ahead of a hearing on the request.

How Democrats will break on the issue is less clear. One moderate Armed Services Democrat and a key swing vote, Rep. Elaine Luria of Virginia, is already backing the push for another sizable defense increase beyond Biden’s level.

“At this point, I think we need a 5 percent real increase in the budget and I think that our ultimate goal should be to get to 5 percent of GDP, or [approximately] $1 trillion,” Luria told POLITICO. “That is what it is going to take to modernize the nuclear enterprise … and to make a serious investment in our shipbuilding and actually be serious about deterring Chinese aggression against Taiwan.”

“We have to get going early on making sure that we can add what needs to be added,” she said.

A handful of Democratic defections to the Republican side could tip the topline debate in either the House, where Democrats have just a 12-vote majority and an even narrower margin at the committee level, or the evenly split Senate.

Fourteen Democrats, including some of the party’s most vulnerable incumbents, backed a $25 billion increase to Biden’s request in the fiscal 2022 National Defense Authorization Act. In the Senate, only one Armed Services Democrat, progressive Sen. Elizabeth Warren of Massachusetts, opposed the increase.

A $1.5 trillion spending deal struck in March went even further, allocating nearly $30 billion on top of the administration’s request.

For now, many Democrats say they’re focused on the capabilities the budget funds, rather than fixating on an overall budget number.

“It can’t just be a debate about the topline,” House Armed Services Chair Adam Smith (D-Wash.) told POLITICO. Smith, who opposed efforts to add money to the defense bill for fiscal 2022, has conceded that the Russian invasion of Ukraine will result in a larger military posture in Europe and higher defense spending this time around.

“Making sure we’re investing in information systems and survivable equipment and understanding how warfare has changed. All that matters, too,” Smith said. “And we want to make sure we keep that as a central part of the debate while we will also, ultimately I’m sure, debate the number.”

The Democratic caucus is already facing divisions over the Pentagon budget. Progressive lawmakers have sought to constrain, and even cut, defense spending. That push came up short last year when centrist Democrats sided with Republicans to boost the budget. And fresh spending spurred by the Ukraine crisis has further scrambled progressives’ efforts to hold the line on the Pentagon budget.

Top lawmakers in both parties have indicated they’ll be receptive to further requests for money to deal with Russia’s invasion of Ukraine. As a result of the crisis, most Democrats are ready to accept the $30 billion defense increase proposed by the White House, according to House Budget Committee Chair John Yarmuth (D-Ky.).

“I think there is less resistance to the increase basically because of what’s been going on in the last month, it’s pretty obvious that we’re going to have an increased presence in Europe,” Yarmuth said. “I don’t think there’ll be as much pushback as there would otherwise be about raising defense by $30 billion.”

Still, Yarmuth doubts there’s momentum in the caucus for giving the Pentagon more money than it requested.

“I don’t think anybody wants to go higher,” he predicted.

Then again, it’s an election year. Some Democrats who supported giving the Pentagon more money than it requested for the current fiscal year aren’t ruling out doing so again, while noting that what matters is what the budget buys rather than the topline.

“It sounds simple, but I want to be resourced to counter the threats,” Rep. Elissa Slotkin (D-Mich.) said. “And I am willing to spend money to do that.”

“Just as the Chinese have invested so heavily in certain technologies, I am willing to really double down and invest in the thing we care about, and that often means more money,” she said. “But I also want to see what kind of work the Pentagon is doing to cut out the fat.”

Massachusetts Democrat Seth Moulton, a Marine veteran who also backed more Pentagon spending, called it “absurd to be talking about toplines and not talking about what’s in the budget.” Rep. Mikie Sherrill (D-N.J.), a Navy veteran, added that she views the budget “not as much about the topline as what we’re investing in.”

Defense Secretary Lloyd Austin and Joint Chiefs Chair Gen. Mark Milley will make the case for the fiscal 2023 Pentagon budget at a House hearing on Tuesday morning. Biden’s overall national defense proposal of $813 billion included $773 billion for the Pentagon, up from $743 billion the Defense Department ultimately received for fiscal 2022.

The proposed budget is the largest ever in nominal terms, but represents just a 1.5 percent increase when accounting for inflation. Republicans argue that runaway inflation will devour the billions of dollars Congress poured into the Pentagon — which includes billions for more aircraft, ships and other weapons systems. Austin and Milley will likely face pointed questions about whether the administration’s request adequately accounts for that and the risks incurred by budget tradeoffs, such as shrinking the Army’s ranks and retiring ships early.

Still, with a military budget request exceeding $800 billion, some Democrats who once backed more defense spending may be willing to go only so far.

“I have confidence overall in what the president is requesting and I wouldn’t see the need to push that any higher,” said Rep. Anthony Brown (D-Md.), an Armed Services member who supported a higher defense budget in last year’s defense policy deliberations.

Sen. Tim Kaine (D-Va.) said he’s satisfied with “the basics” of Biden’s budget, including the Pentagon topline, but said it “would be premature” to say whether he would back more defense spending.

The individual military services are also outlining their top priorities that weren’t included in the budget, providing fodder for lawmakers to make additions to the plan. So far, the Navy has sent lawmakers a list totaling $4 billion in unfunded needs and the Marines have outlined $3.5 billion in off-budget priorities.

With midterms looming that could sweep Republicans back into majorities in both chambers, lawmakers are unlikely to agree on funding levels for the Pentagon and other federal agencies until after the elections.

Democrats and Republicans didn’t hammer out a final government funding agreement this year until nearly halfway through the fiscal year, leaving most military and other federal spending on autopilot for months.

Ultimately, Democrats agreed to a substantial defense increase in exchange for a cash infusion for their own priorities on the non-defense side of the federal ledger.

“I do think this is a nation with resources that can do both,” Brown said.