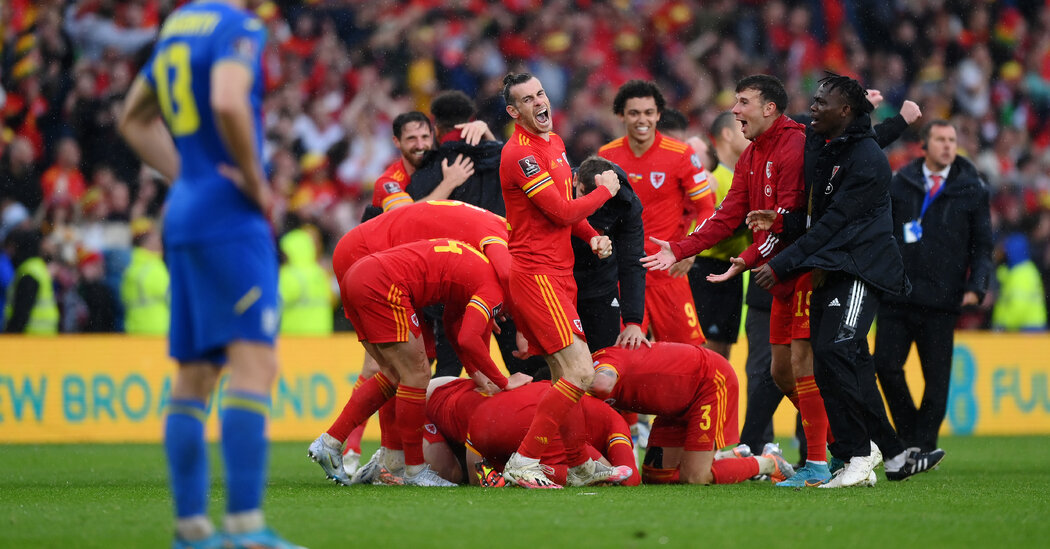 CARDIFF, Wales — When it was over, when the referee blew his whistle and the crowd roared and Ukraine’s dream of earning a place in this year’s World Cup was gone, most of its national soccer team dropped straight to the grass. A few players held their heads in their hands. The rest simply stared off into space.

The scoreboard confirmed what, in that moment, even the Ukrainians themselves could scarcely believe: Wales 1, Ukraine 0. A World Cup qualifying journey laced with symbolism and spirit and national pride, an opportunity delayed three months by war with Russia and reaching its denouement on a day that had begun with explosions in Kyiv, the first direct airstrikes on the capital in a month, had ended not in triumph but in the cruelest of twists: defeat to Wales on an own goal scored by a Ukraine forward, Andriy Yarmolenko.

“The most important game of our lives,” Ukraine defender Oleksandr Karavayev had called the match less than 24 hours earlier. And for weeks, he and his teammates and their countrymen had treated every step of their war-delayed World Cup campaign as such: a chance to bring joy to a nation desperately in need of it; a chance to showcase their pride in their jerseys, in their flag, in themselves; a chance to keep their nation’s plight on the world stage.

Fueled by hundreds of daily messages from friends and family and frontline troops urging them forward, and backed by a few thousand fans from the growing Ukrainian diaspora who had come out to support them, the players had pushed past Scotland on Wednesday in Glasgow to arrive in Cardiff on Sunday within a single victory of the World Cup.

How high was the drama? A group of soldiers recently sent the team a tangible token that they were all in it together: a Ukrainian flag signed by their comrades. It hung, again, in the team’s dressing room Sunday.

Read More on the World Cup

“They make only one demand,” midfielder Taras Stepanenko had told The Guardian of the messages he and his teammates had been receiving for weeks. “‘Please do everything you can to go to the World Cup.’”

But it is Wales, not Ukraine, that will be headed to Qatar in November, to a date with the United States in its opening game. That was the other half of Sunday’s story, another tale of fraught emotions and agonizing waits and overflowing national pride.

Wales has not played in the World Cup since 1958. To push their team over the line Sunday, roughly 30,000 of its fans had packed Cardiff City Stadium, the team’s intimate but boisterous home, with their energy and with their voices and with a dream of their own.

A half-hour before kickoff, they were already in full voice, joining the Welsh singer Dafydd Iwan in belting out a full-throated rendition of the folk standard “Yma o Hyd.” The song’s chorus — “We’re still here” — spoke not so subtly to the mood in a country happy to host Ukraine but just as happy to beat it, too.

Wales had also come to Cardiff to win.

“We’ll be the most popular team in the stadium, that’s the main thing,” the Wales captain Gareth Bale had said on the eve of the game. “We understand the awful things going on in Ukraine. Our hearts go out to the kids, families and people of Ukraine. But come tomorrow, it’s a game of football. We want to win.”

Sunday’s match was a winner-take-all affair in the strictest sense. The victor would claim one of the final three places in the World Cup and complete a group that, in addition to the United States, includes England and Iran. The loser — whichever team it was — would leave with the wholly inadequate consolation that, just like every other country eliminated on the road to Qatar, it could try again in four years.

Ukraine had not qualified for the World Cup since 2006, its only previous trip to the tournament. But Wales had waited even longer — 64 years to be precise — and then it had waited another three months — Sunday’s game was originally scheduled for March but postponed after Russia invaded Ukraine — for the chance to complete the job.

Bale delivered the blow that mattered in the 34th minute, lashing a 25-yard free kick past a defensive wall and toward Ukraine’s goal. Yarmolenko was the only player in position to intercept it, but in the steady rain, he turned the ball not to safety but past his goalkeeper, Georgiy Bushchan, and into Ukraine’s goal.

Wales nearly doubled its advantage three minutes after halftime, but Aaron Ramsey, handed the World Cup place on a platter by a cross from Kieffer Moore, turned his shot wide of a yawning goal.

Ukraine, its cool shifting to desperation as the minutes ticked away from there, tried again and again to penetrate a Wales defense that slowly but surely tightened like a vise. Yarmolenko had several shots blocked inside the penalty area, and Roman Yaremchuk and the substitute Artem Dovbyk produced even better chances, only to be turned back by the 35-year-old Wales goalkeeper, Wayne Hennessey.

“We did everything we could,” Ukraine Coach Oleksandr Petrakov said. “I want to say sorry that we didn’t score, but this is sport.”

Wales was just as proud, and similarly unapologetic.

The game ended as it began, in a steady rain and amid mutual admiration. The Wales players hailed their opponents, and the Spanish referee, Antonio Mateu Lahoz, took a moment to seek out Ukraine’s Oleksandr Zinchenko and speak to him quietly as he squatted alone on the turf.

Within minutes, though, Zinchenko and his teammates were up again. They moved as a group until they stood in front of the small clot of their fans in one corner of the stadium, where they saluted their support. When they were gone, Wales’s team took up the same spot and paid the same tribute to the Ukraine supporters, some of whom were by then swapping their bright yellow and blue jerseys for the red ones worn by Welsh fans in a final show of friendship, an enduring sign of respect on an emotional day.

Then it was time to go. In 90-plus minutes of drama, it had taken only an instant, it turned out — a swing of Bale’s foot and a flick of Yarmolenko’s head — for the dreams of one nation to be delivered, and for those of another to be dashed.