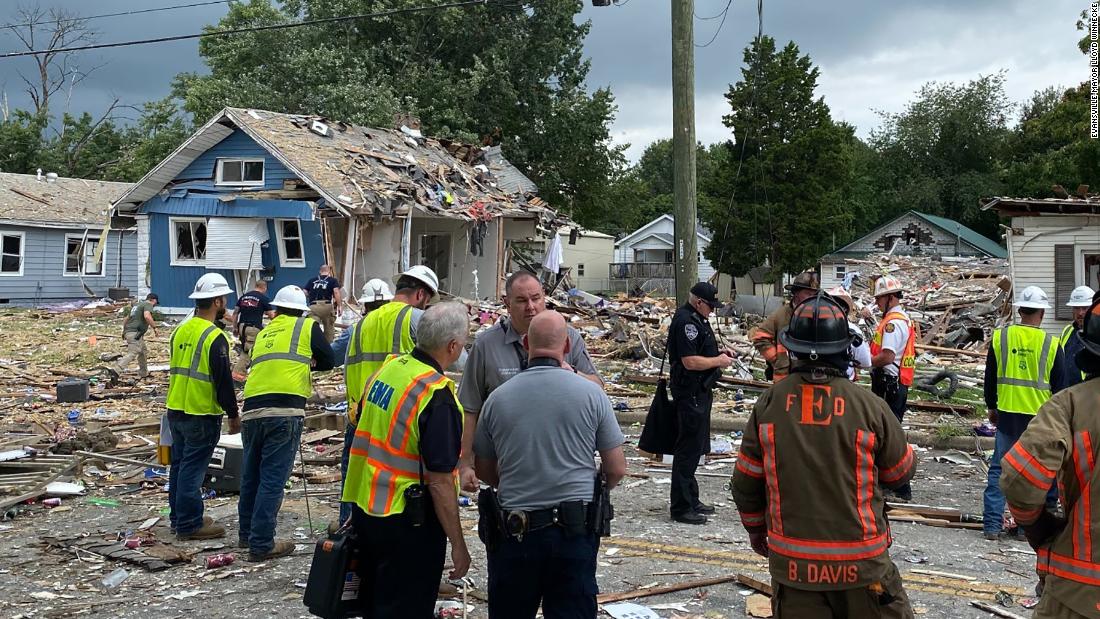 Connelly retracted his earlier statement that said the house explosion was accidental. “I have to retract the accidental comment, so it’s still a cause-undetermined explosion,” he said.

During an earlier news conference Thursday afternoon, Connelly said, “We have multiple agencies conducting portions of the investigation, and based on Alcohol, Tobacco, and Firearms, Indiana State Fire Marshal’s Office, Indiana Department of Homeland Security, and the Evansville Fire Department Investigation Division, intentional ignition source has been ruled out,” Connelly said.

The cause of the explosion is still under investigation, Connelly said, adding that authorities do not have any people who are unaccounted for at this time, but 15 families remain displaced.

More than a dozen agencies responded to the scene, which Mayor Lloyd Winnecke previously described to CNN affiliate WFIE as “devastating,” saying it would likely take time to figure out what happened.

In addition to the three people killed, at least one person was transported to the hospital for non-life-threatening injuries.

The three people who died have been identified as 43-year-old Charles Hite, 37-year-old Martina Hite, and 29-year-old Jessica Teague, according to the Vanderburgh County Coroner. Their causes and manners of death are still pending autopsies, Chief Deputy Coroner David Anson said.

Husband and wife, Charles and Martina Hite, were identified as two of the victims of the explosion, family members told CNN. Martina’s cousin, Tina Louise Hasenor, said that the couple was in their home when the explosion happened.

Charles and Martina had been married for about 3 years, according to Hasenor.

“Her husband was a really nice guy. They definitely loved each other, and we’re meant to be together,” Hasenor said.

Hasenor described her cousin as “a great person with a heart of gold,” and said the pair will be deeply missed.

An initial survey showed 39 houses suffered “severe to minor damage,” the chief added. Eleven homes were left uninhabitable, he said, adding the American Red Cross will help affected families. Evansville, home to about 116,000 people, is about a three-hours’ drive southwest of Indianapolis.

Destroyed and damaged homes and piles of debris featured in photos posted on Twitter by the mayor, who said first responders and local departments will “keep residents in the Willemette Village/Wesselman Park neighborhoods safe and informed.”

“I’d seen photos that have been placed online, but once I walked up to the residence itself and saw the devastation with my own eyes, it was, I mean, it was a gut punch,” Winnecke said Wednesday.

“Across the street from the explosion you’ll see house after house that has windows blown out, that has you know there’s insulation blown out from homes,” the mayor added.

A structural collapse team was called in to survey buildings and to make sure all gas and electric circuits “had integrity,” the chief said Wednesday. At least eight agencies responded, including the Bureau of Alcohol, Tobacco, Firearms and Explosives and the State Fire Marshal.

“They will resume the investigation in the morning,” the chief said Wednesday evening. “This is a standard operating procedure for an incident of this magnitude and of this type.”

Search and rescue teams will be allowed back into the area once utilities are secured and the ATF determines its part of the investigation is over, Connelly said.

Authorities asked residents to stay away from the area.