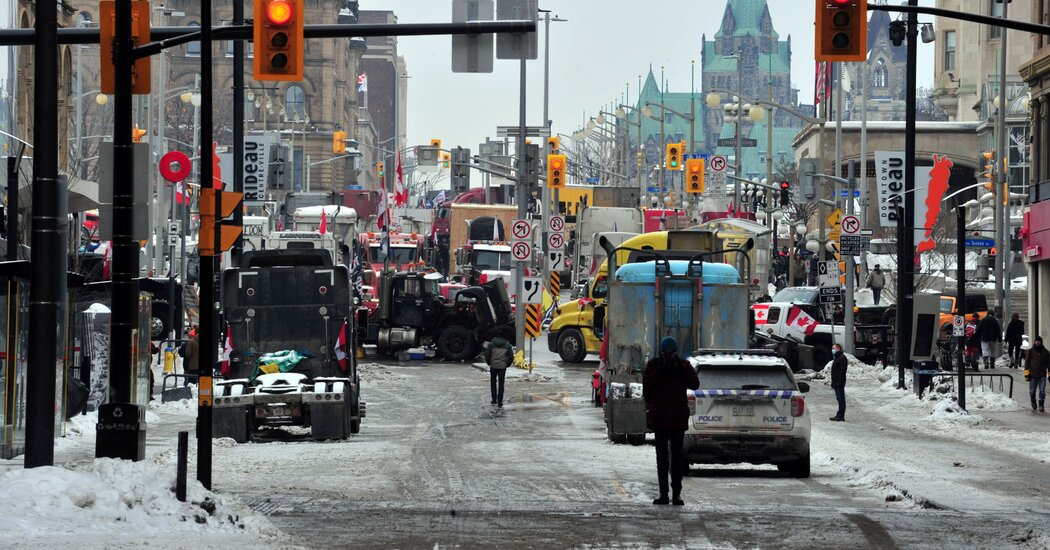 A new trucker blockade protesting pandemic restrictions snarled traffic at a third point along the Canadian and the United States border on Wednesday, putting more pressure on the automotive industry, which depends on the seamless movement of parts and components between the countries.

A barricade of trucks in Sarnia, Ontario, stalled traffic traveling on the only expressway route to a bridge into the United States that connected Sarnia and Port Huron, Mich.

That bridge was already swamped on Wednesday with traffic from the United States after it became the only alternative route to the Ambassador Bridge between Detroit and Windsor, Ontario, which was shut down in the Canada-bound direction on Monday after protesters erected a road blockade.

On Wednesday, Drew Dilkens, Windsor’s mayor, said he would ask the federal government for assistance in dealing with the blockade in Windsor.

Because of parts supply issues related to the problems with the Sarnia bridge, the Stellantis minivan assembly plant in Windsor was forced to cut two shifts short Tuesday, said LouAnn Gosselin, a spokeswoman for the company. Production resumed Wednesday morning, she said, and the company was working with parts suppliers to prevent further shutdowns.

Truck protesters on Wednesday were also still interfering with another border crossing between the Western province of Alberta and Montana.

Meanwhile, in Toronto, Duty Inspector Michael Williams of the Toronto Police Service said Wednesday afternoon that police had implemented road closures in the downtown area ahead of a possible truck convoy after seeing concerning social media posts that protests were heading to Toronto. On Wednesday morning, police blocked off roads surrounding the provincial legislature building, repeating precautions they took ahead of protests last weekend.

“We will scale our operations up” if necessary, he said.

The three blockades and the prospect of another convoy disturbing Toronto, Canada’s largest city and financial capital, came as the demonstrations in Ottawa — by loosely organized groups of truck drivers and protesters opposed to vaccination requirements for truckers crossing into Canada from the United States — continued to echo globally. In France, dozens of trucks and vehicles left the south of the country for Paris to vent their anger over their country’s vaccination policies.

The protests have also inspired copycat convoys in New Zealand and Australia. And there are talks of another in the works in the United States.

Far-right and anti-vaccine groups around the world have amplified the message of the Canadian protesters on social media, raising millions of dollars in online campaigns.

The main Facebook group for the French demonstrators has attracted more than 320,000 followers in just a few days. The movement calls itself “Convoi de la Liberté,” a direct translation of “Freedom Convoy,” the slogan for the Canadian movement.

In Ottawa, during a raucous session of Question Period on Wednesday, Prime Minister Justin Trudeau faced a barrage of criticism from opposition politicians, including the contention that he wanted to keep Canada in a state of permanent pandemic, and that he was watching passively as the protests undermined Canada’s image on the global stage.

Mr. Trudeau was resolute, noting that during the last federal elections in September, in which he was re-elected, Canadians had shown clearly that they supported a party that was in favor of vaccination mandates.

He called again for the protests to end. “We are calling for an end to the barricades,” he said.

In Ottawa, life continued to be disrupted by the presence of more than 400 trucks blocking roads. Residents got some relief on Tuesday night when the drivers of the trucks for the second night refrained from blasting their air horns, a form of protest that was enjoined by a court order on Monday afternoon.

Although most Canadians support the public health measures that Canada has taken to combat the pandemic, the truck protesters have nonetheless tapped into fatigue with pandemic restrictions.

On Tuesday, Scott Moe, the conservative premier of Saskatchewan, who has voiced support for the protesters, announced that the province would end vaccination and testing requirements on Feb. 14. Indoor mask requirements will continue until the end of the month.

In Alberta, Premier Jason Kenney announced that the province’s vaccine passport program would end as of Wednesday, and that mask mandates in schools would be lifted next week.

Most Canadian trucking groups have condemned the convoys and blockades, and said that more than 90 percent of drivers were vaccinated. Despite protesters’ claims that the mandatory vaccination of truckers would lead to border disruptions and supply shortages, the Canadian government said that it has not seen any change in truck traffic on its border.

Ottawa’s police chief, who declared a state of emergency on Sunday, has vowed to end the protests but has said the city needs 1,800 more officers to do that. Mr. Trudeau said on Twitter that hundreds of Royal Canadian Mounted Police had been mobilized to support Ottawa police officers, and promised that the Canadian government and city would employ “whatever resources are needed to get the situation under control.”