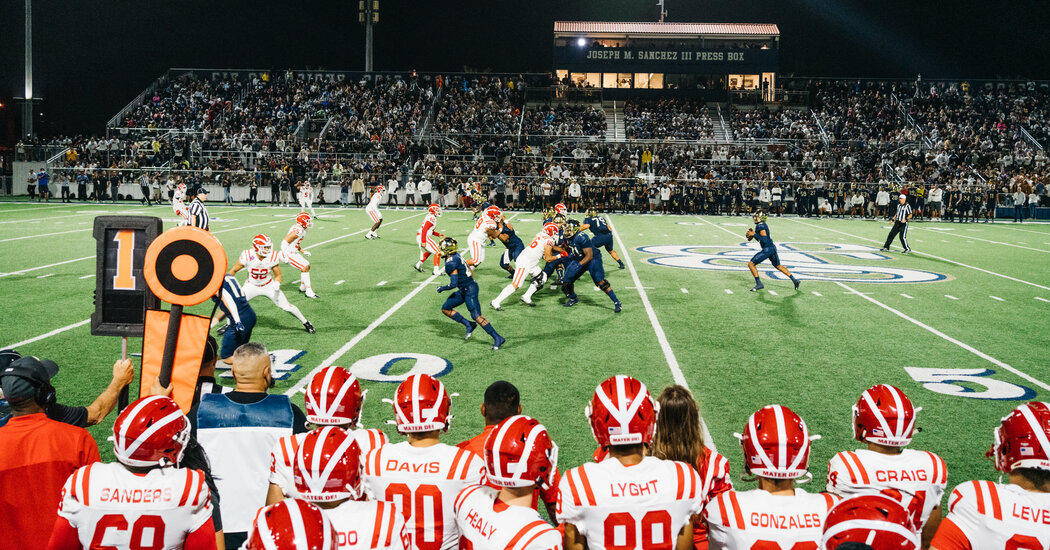 When Mater Dei started bringing in additional gamers from farther afield — from Moreno Valley to the northeast, Temecula to the southeast and Los Angeles to the west — Rollinson organized for vans that college staff residing close to these areas might drive to and from the campus every day. As many as a dozen gamers trip in the vans.

Josh Hunter, a senior security from Temecula, 70 miles from the faculty, stated the van was a big think about his selecting Mater Dei over St. John Bosco, which was even farther away. “There’s some bad days, for sure, where you’re tired and your best friend from the neighborhood can walk to school,” stated Hunter, who’s the son of the former Atlanta Braves first baseman Brian Hunter and is contemplating enjoying each baseball and soccer at San Diego State. “But my goal was to go to college for free — that was the big push.”

The day earlier than Mater Dei and St. John Bosco met, Myron Williams, a 52-year-old father, stood in an finish zone at Panish Family Stadium, watching the faculties’ freshman groups play. His placement was strategic — at halftime, dad and mom from each side handed him to ask why he wasn’t sitting on their facet.

His son, Madden, a promising eighth-grade receiver who needs to play in highschool, is attempting to resolve between St. John Bosco and Mater Dei.

“It’s no different than looking at colleges,” Myron Williams stated. “If you have N.F.L. aspirations, you’re not going to play at an N.A.I.A. school. As a parent, I know there’s no magic pill, but these are the best coaches and the best players, so if you’re going through that for four years, you would hope to be better prepared for the chance to play in college.”

The subsequent night time offered a touch of what lies forward for these freshmen. More than a dozen faculty coaches roamed the sideline, retaining their eyes on prospects. Of all the elite expertise on the subject, it was Elijah Brown, Mater Dei’s slight sophomore quarterback, who shined brightest, coolly delivering quite a lot of throws on the right track.

The rating was tied at halftime however Mater Dei thwarted St. John Bosco twice on downs close to its aim line and eased to a 42-21 victory. Matayo Uiagalelei, a 6-foot-5, 254-pound junior tight finish and defensive finish whose brother D.J. is the beginning quarterback at Clemson, was kicking himself for dropping three passes. “I’m going to put that on me,” Uiagalelei stated of the loss.