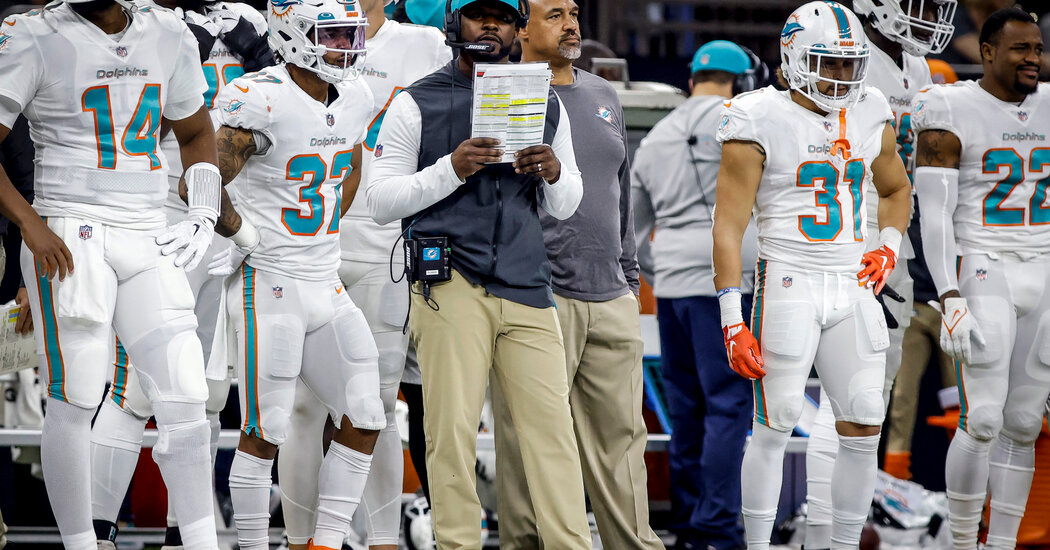 Brian Flores, who was fired as coach of the Miami Dolphins last month and was rejected for new jobs with other clubs, has sued the N.F.L. and its 32 teams alleging that they have discriminated against him and other Black coaches in their hiring.

His filing in federal court comes just days after the Giants, one of the teams he interviewed with for a position, named Brian Daboll, who is white, as their new head coach.

Flores cited text messages he said were sent by his former boss, New England Patriots Coach Bill Belichick. In the messages, Belichick appears to congratulate Flores for winning the Giants’ job, which he had yet to interview for at that point. Flores responded by asking if Belichick had intended the message for Daboll, who interviewed before Flores’s scheduled meeting.

The respondent answered: “I think they are naming Daboll. I’m sorry about that. BB”

A Giants spokesman, Pat Hanlon, said in a statement the team was “confident with the process that resulted in the hiring of Brian Daboll” and that “Flores was in the conversation to be our head coach until the eleventh hour.” A Patriots spokesman said he did not anticipate that the team would be issuing a response.

The N.F.L. said it is “deeply committed to ensuring equitable employment practices” and “we will defend against these claims, which are without merit.”

The screenshots of a conversation purportedly initiated by Belichick, the notoriously tight-lipped coach, and as well as other anecdotes that paint an unflattering portrait of Stephen Ross, the Dolphins’ owner, provide a rare insight into the league’s business in a class-action suit that contends widespread discrimination.

Flores is the son of Honduran immigrants to the Brownsville neighborhood of Brooklyn. He led the Dolphins for three years, including two winning seasons, and in the suit said he was “humiliated in the process as the New York Giants subjected him to a sham interview in an attempt to appear to provide a Black candidate with a legitimate chance at obtaining the job.”

In a statement, Flores said that he understood that “I may be risking coaching the game that I love and that has done so much for my family and me. My sincere hope is that by standing up against systemic racism in the N.F.L., others will join me to ensure that positive change is made for generations to come.”