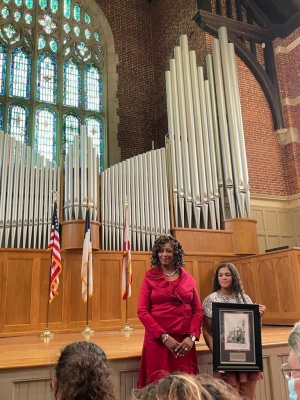 Upon conferring her award, Dr. Anthony Leigh, senior vice president for student and institutional development at Huntingdon, read from her citation: “While the Who’s Who of Montgomery is well-populated with Huntingdon alumni, some alumni of the College have taken their wisdom and talents far beyond the River Region, such as pioneering women like Dr. Bessie House-Soremekun. Scholar, educator, author, administrator, entrepreneur, inventor, economic developer, television and radio personality, African royalty, and global difference-maker, Dr. Bessie House-Soremekun is a dynamo. She was among the first Black students to enroll at Huntingdon … and she has been blazing a trail by inspiring and empowering people ever since. Her influence has been felt worldwide, and she has used a number of roles in higher education to advance African American studies, civic engagement, global entrepreneurship, and sustainable development. She has also positively impacted Huntingdon by making several online master classes … available to Huntingdon students, and she has established a scholarship at Huntingdon in memory of her grandmother, Bessie Annie Fannings, for whom she is named. It is the great honor of Huntingdon College for the newest accolade in Dr. House-Soremekun’s most impressive resume to be the 2021 Alumni Achievement Award.”

Dr. House-Soremekun’s award was presented by Ms. Nevaeh McIntyre, a sophomore at Huntingdon from Pelham, Alabama, and an officer of Huntingdon’s Black Student Union.

“I was deeply humbled to receive this very prestigious award,” said Dr. House-Soremekun. “It is always nice to be appreciated and valued for your accomplishments and it was a wonderful experience to be back at Huntingdon once again for this important occasion. I am thrilled that Ms. McIntyre, a Huntingdon College student and officer of the Black Student Union, presented me with the beautiful plaque. It was so special and a day that I will always remember and cherish.”

Described as an institution-builder, Dr. House-Soremekun created and exercised oversight of five entrepreneurial centers: the National Center for Entrepreneurship, Inc.; the Center for the Study and Development of Minority Businesses at Kent State; the Entrepreneurial Academy of the Cleveland Empowerment Zone; the Entrepreneurial Academy of Youngstown, Ohio, a spin-off center; and the Center for Global Entrepreneurship and Sustainable Development at IUPUI. Collectively, these centers produced award-winning research and provided business training classes to more than 400 individuals using a business training module that she created. Through the work of these centers, numerous businesses were established and/or expanded in Northeast Ohio.

A prolific and gifted writer, Dr. House-Soremekun has authored or edited eight books: “Class Development and Gender Inequality in Kenya: 1963-1990;” “African Market Women and Economic Power: The Role of Women in African Economic Development;” “Globalization and Sustainable Development in Africa;” “Gender, Sexuality and Mothering in Africa;” “Confronting the Odds: African American Entrepreneurship in Cleveland, Ohio,” first and second editions; “Yoruba Creativity: Cultural Practices of the Modern World;” and “African American Entrepreneurship: Philanthropic Giving, Self-Help, and the Struggle for Economic Empowerment,” which is under contract with Indiana University Press. Her research has appeared in Crain’s Business Newspaper, The Cleveland Plain Dealer, The Akron Beacon Journal, The Buckeye News, and other venues. She has also published many book chapters, as well as articles in some of the top journals in her fields of expertise.

As a grant-writer she has written and received more than 24 grant awards totaling nearly $1.5 million from various funding organizations, including the Shell Foundation; the Federal Government’s Department of Housing and Urban Development (HUD) through the Cleveland Empowerment Zone; the Cleveland Foundation; the Ohio Board of Regents; the Ohio Employee Ownership Program; the Ohio Urban University Program; Kent State University; Indiana University-Purdue University Indianapolis; Indiana University at Bloomington; Indiana Humanities; and the Mahoning Youngstown Community Action Partnership.

In addition to the  Huntingdon College Alumni Achievement Award, she has been honored with more than 50 awards for teaching, research, service, community and civic engagement, and organization of international conferences, including the Special Recognition Award from the board of directors of the African Studies Association; the Dr. Martin Luther King Jr. Drum Major Lifetime Achievement Award from Mothers on A Mission; the President’s Lifetime Achievement Award from the Nigerian Community of Greater Cleveland; the External Achievement Recognition Award from the chancellor at Indiana University-Purdue University Indianapolis; the Distinguished Scholar Award for Outstanding Scholarship, Teaching, and Service in Africana Studies from Tennessee State University; the Global African American Activist Ambassador Award from the African American Restoration Movement of Indianapolis, Indiana; the Oni Award from the International Black Women’s Congress; a gold key to the city of Hopkinsville, Kentucky, on behalf of the mayor; and proclamations from former Congresswoman Stephanie Tubbs-Jones of Ohio and former mayor Jane Campbell of Cleveland, Ohio. She holds three high Yoruba Chieftaincy titles, which include Erelu Bada Asiwaju of Egbaland (conferred on her by His Royal Majesty, (King) Oba Michael Adedotun Aremu Gbadebo, the Okukenu IV, Alake and Paramount Ruler of Egbaland, Nigeria; the Iyalode of Bakatari; and Erelu Mayegun of Keesi.

Also active in media, Dr. House-Soremekun has appeared on the Kaleidoscope Show; on Work and Money; on ABC and NBC news affiliate programs; and on National Public Radio (NPR), among other radio programs. She was the host of her own television show on cable television in Cleveland, Let’s Talk Business, and the host of her own internet radio show, The Dr. Bessie House Show.