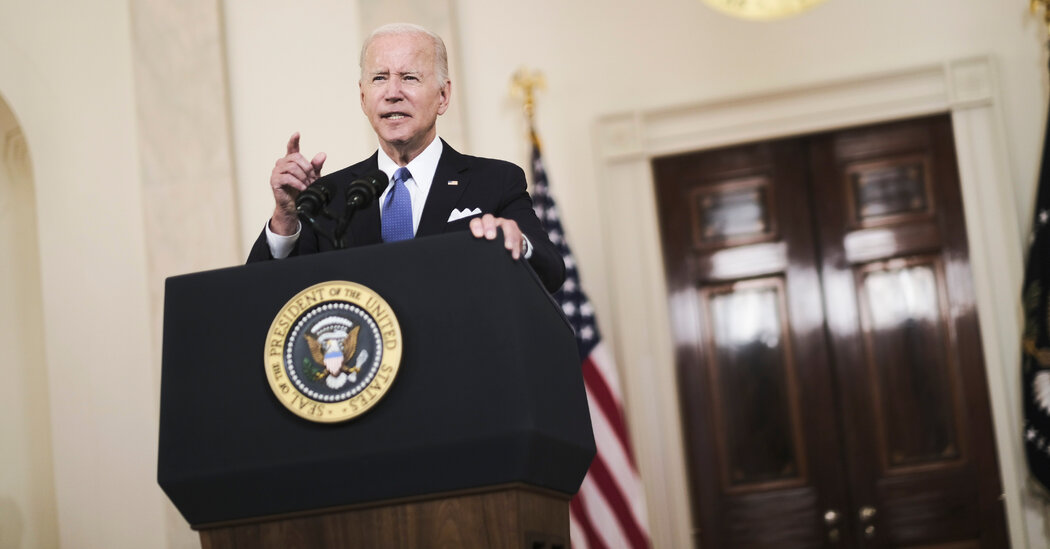 President Biden on Friday described the Supreme Court’s ruling to eliminate the constitutional right to abortion as a “tragic error,” one that he immediately used to galvanize voters to head to the polls in the midterm elections.

“Today the Supreme Court of the United States expressly took away a constitutional right for the American people,” Mr. Biden said from the White House. “They didn’t limit it, they simply took it away.”

Mr. Biden said that the Supreme Court’s decision to overturn Roe meant “the health and life of women in this nation were now at risk.” The consequences of the decision were so far-reaching, the president said, that it required action from Congress but also motivation for Americans to vote in the coming elections, where the Democratic Party is expected to lose seats in Congress.

“No executive action from the president can do that,” Mr. Biden said of codifying Roe in law. “Congress as it appears lacks the votes.”

“Voters need to make their voices heard,” Mr. Biden added. “This fall we must elect more senators and representatives who will codify a women’s right to choose once again.”

Mr. Biden’s speech amounted to one of the more forceful defenses of reproductive rights for a president that has not always been comfortable speaking about the issue. It was also another step in Mr. Biden’s evolution from a critic of Roe early in his career to a forceful defender of a woman’s right to choose.

It also comes as progressives have seized on the overturning of Roe to galvanize Democrats before the midterm elections. In the weeks after a draft opinion of the Supreme Court decision leaked in early May, the White House has made efforts to insist Mr. Biden would do whatever he can to defend abortion rights.

“I will do all in my power to protect a women’s right in states where they will face the consequences of today’s decision,” Mr. Biden said. “The court’s decision casts a dark shadow on a large swath of the land.”

Mr. Biden said his administration would defend women who chose to travel to other states who allow abortions.

“Any state or local official, high or low, who tries to interfere with a woman who is exercising her basic right to travel I will do everything in my power to fight that deeply un-American attack,” Mr. Biden said.

He also said he would direct federal agencies to protect the right to use contraception.

Mr. Biden has often cast the possibility of the Supreme Court’s decision as one that would not just threaten abortion rights but more broadly the right to privacy. While he has used the word “abortion” in written statements, he rarely has uttered the word publicly. He did so on Friday when he warned “state laws banning abortion are automatically taking effect today, jeopardizing the health of millions of women.”

Mr. Biden warned on Friday that the Supreme Court decision could have wide-ranging implications, citing Justice Clarence Thomas’s concurring opinion that said the same rationale the Supreme Court used to eliminate the right to abortion should be used to overturn the rights to contraception and same-sex marriage.

“This decision must not be the final word,” Mr. Biden said. “My administration will use all of its appropriate lawful powers. Congress must act. And your vote? You can have the final word.”

Mr. Biden left his lectern without answering shouted questions about whether he supported ending filibuster to codify Roe or whether the ruling on Friday was proof of a broken Supreme Court. The White House also canceled its routine press briefing.